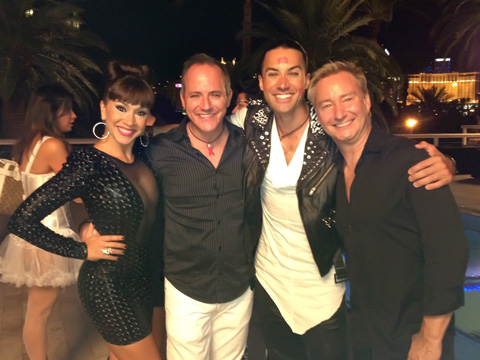 Great gala event in Las Vegas last night as Aid for AIDS Nevada held one of their largest fund-raising events of the year – The Black & White Ball.

Many of Las Vegas’ top headlining performers showed up to wow the audience at the Nirvana Pool at the Hard Rock Hotel was transformed into an unforgettable party atmosphere, with a sea of people dressed in black and white, all with the common goal to fight HIV/AIDS in Southern Nevada. The party began at 9pm and attendees were treated to tastings from some of Las Vegas’ premier restaurant and spirit vendors.

A special surprise was Diana DeGarmo and Ace Young, former American Idol finalists and now leading Broadway and music artists in their own right, took to the stage for a rousing “Any Way You Want It.’ See my iPhone video above.

The event expertly moved along by host Jaymes Vaughan, and we were also treated to an appearance by US Senate candidate Shelley Berkley, a longtime ally of the LGBT community.

For more info about AFAN visit their website at www.afanlv.org