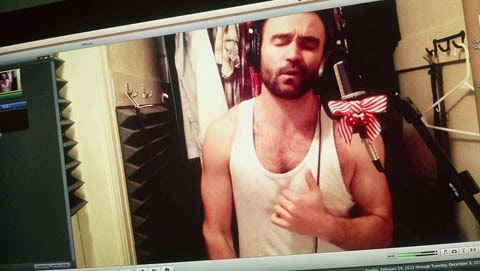 Seeing how it’s Hump Day and I just received this excellent cover of Joni Mitchell’s “River” by the uber-talented Jeb Havens, how could I not post it today?

You can’t have too much holiday music 🙂

I’ve enjoyed Jeb’s music for a long time. You’ll recall his version of “Fast Car” this summer set the internet on fire, plus his collaborations with other artists like Matt Zarley and Tom Goss, and his own original songs have all appeared on The Randy Report.

In addition to a gorgeous voice that suits him perfectly, Jeb has an uncanny sense for songs that suit his considerable talents, and “River” is a fantastic choice for both his voice and his interpretive powers.

Find more of his music on iTunes here.

Although not specifically a Christmas song (the lyrics begin with “it’s coming on Christmas”), the song has emerged as a modern Christmas standard.

“River” is the second-most widely covered of songs in Mitchell’s catalog.