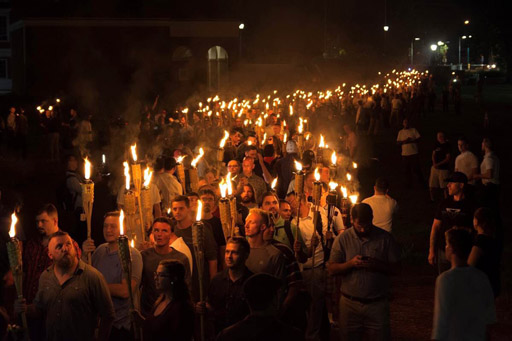 If you’re just waking up and missed it, torch wielding white nationalists marched on a church in Charlottesville VA last night.

A month after a Ku Klux Klan rally here ended with the police using tear gas on protesters, Charlottesville is bracing for a weekend of white nationalist demonstrations and counterprotests, and suddenly this tranquil college town feels like a city under siege.

Thousands of people — many from out of town — are expected to descend on the city to either protest or participate in a “Unite the Right” rally on Saturday convened by white nationalists who oppose a plan to remove a statue of Robert E. Lee, the Confederate general, from a city park.

“People are angry, they’re scared, they’re hurt, they’re confused,” said the Rev. Seth Wispelwey of the local United Church of Christ. “White supremacists rallying in our town is an act of violence.”

Late Friday night, several hundred torch-bearing men and women marched on the main quadrangle of the University of Virginia’s grounds, shouting, “You will not replace us,” and “Jew will not replace us.” They walked around the Rotunda, the university’s signature building, and to a statue of Thomas Jefferson, where a group of counterprotesters were gathered, and a brawl ensued. At least one person was led away in handcuffs by the police.

In a Facebook post, Charlottesville’s mayor, Mike Signer, called it a “cowardly parade of hatred, bigotry, racism, and intolerance.”

“I am beyond disgusted by this unsanctioned and despicable display of visual intimidation on a college campus,” he added.

They yelled racial slurs at people, started fights, & surrounded a church, yet they weren’t met with teargas like BLM. #Charlottesville pic.twitter.com/TbbYtC3hXJ

Tell me again about how they’re not really nazis pic.twitter.com/tVHCzn3blT

UVA lit up by torches of white supremacists marching last night. Terror and hate on the march in 2017. Horrifying. pic.twitter.com/tbUfJyyUud

Like the Nuremberg rallies of old. But on one of the most liberal campuses in America pic.twitter.com/48qCCbWo2a