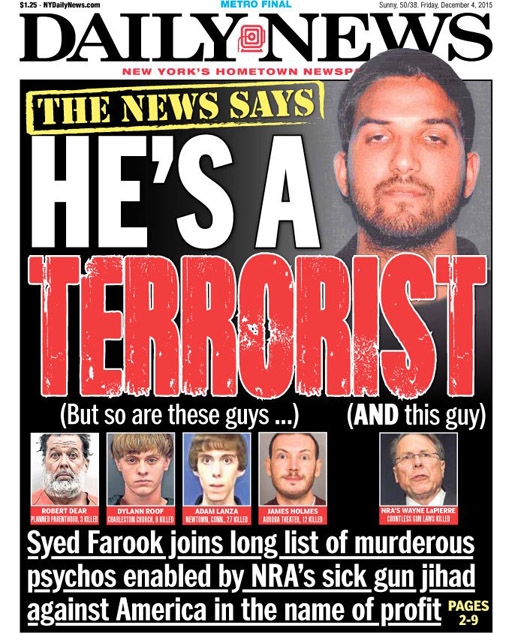 Today’s cover of the New York Daily News features not only the “mass shooter of the week,” Syed Farook, but goes further and pictures several of the mad men who’ve waged war on Americans via gun violence, including (according to NYDN) NRA head Wayne LaPierre.

Although over 90% of Americans approve of common sense background checks when purchasing a gun – including a majority of NRA members, the NRA has politicians so afraid no one in Congress is able to pass anything when it comes to gun legislation.

Jon Stewart runs down the cray cray at the NRA Convention this past weekend in Texas.

The kids in Houston got off to a slow start as they really do more “2016 campaigning” than talk about guns. But they eventually get around to guns. Kinda.

Stewart breaks down the contradictions in the speechifying much better than I can. Take a look…

The head of the NRA, Wayne LaPierre, appeared before the Senate hearing considering gun control and declared that the government is already failing to prosecute people who illegally apply to purchase a gun, there would be no point to impose a background check on people that buy guns at gun shows.

I’m just staggered. With that kind of logic we could get rid of all kinds of laws – people still go faster than the speed limit, so why not just abolish the speed limit?