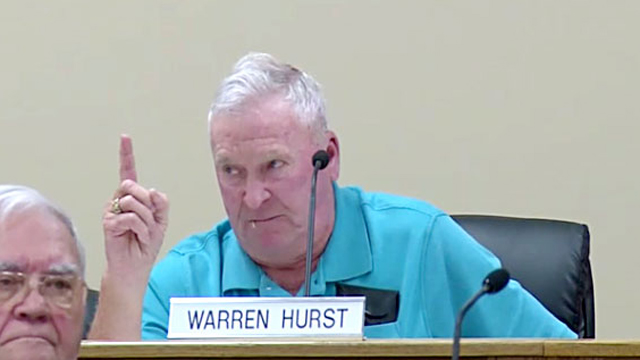 During a commission meeting in Sevier County, Tennessee, Monday night Commissioner Warren Hurst decided he had somethings he wanted to get off his chest.

While the public meeting was meant to discuss a pending vote on becoming a gun sanctuary city, Hurst shifted topics.

“We got a queer running for president – if that ain’t about as ugly as you can get,” said Hurst with a toothpick in the corner of his mouth. “Look what we got running for president in the Democratic party. We can go over here to Hoss’s jail [Sevier County Sheriff] and get better people out of there than those running for democratic to be President of the United States.”

“I’m not prejudiced – but, by golly, a white male in this country has very few rights and they getting took more every day,” added the 77-year-old commissioner. “Now, your kids and your grandkids is gonna pay for what we’ve let happen.”

Local news station WVLT reports one woman stood up and left the meeting telling Hurst, “This is not professional. This is [expletive].”

But many attending the meeting laughed at Hurst’s comments.

Hurst later defended his comments to WVLT saying he stood by his remarks but claimed – get ready for it – that ‘some of his best friends’ are African-American.

Of course, they are.

“The statements made by Commissioner Hurst at the Sevier County Commission meeting of October 21, 2019, do not reflect the opinion or position of Sevier County administration,” said Anderson. “Sevier County is an Equal Opportunity Employer and does not discriminate based on race, color, religion, sex, national origin, age, disability, or status in any other group protected by law.”

Sevier County includes the cities of Gatlinburg and Pigeon Forge (home of Dolly Parton’s theme park, Dollywood). Their economies survive on tourism, so you have to wonder why would anybody want to visit there now?

You can watch Hurst’s comments below.