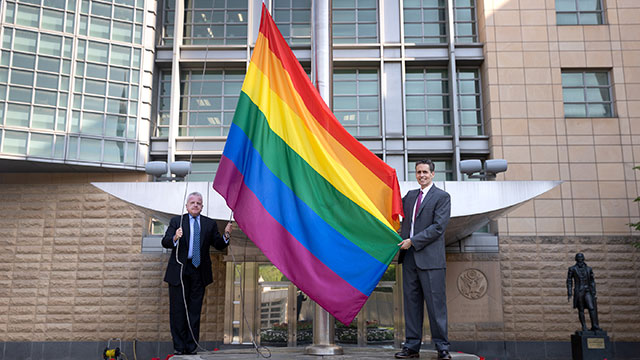 • The Gaily Grind: The U.S. embassy in Russia (above), along with the British and Canadian embassies, hoisted rainbow Pride flags on their buildings in Moscow, defying the country’s “gay propaganda” law signed by Vladimir Putin in 2013.

• New York Post: Reps for Donald Trump approached the social media platform Parler in January with an offer to have the then-president move his social media presence to the platform in exchange for 40 percent of the company’s gross revenues and a promise to “ban anyone who spoke negatively about him.” The owners said ‘no.’

• CBS News: Champlain Towers South was reportedly facing $15M in repairs before it collapsed on June 24. A 2018 engineering report warned of damage to the concrete, and a contractor gave multiple photos to the Miami Herald showing evidence of corrosion and cracks in the building just days before the collapse.

• Edge Media: The Spanish Cabinet on Tuesday passed a draft bill on LGBTI rights that will seek parliamentary approval to allow transgender people over 16 to freely change their gender and name without doctors or witnesses intervening in the process.

.@flotus @drbiden stars on the cover of our August issue! Read the full profile: https://t.co/nxKE4csnjT pic.twitter.com/gopBPIxCff

Secretary of State Antony Blinken has authorized all U.S. diplomatic outposts and embassies to fly the rainbow Pride flag based on what is ‘appropriate in light of local conditions.’”

The new policy is a sharp reversal from the Trump administration which prohibited the presentation of Pride flags.

Secretary of State Antony Blinken has issued a blanket authorization for U.S. diplomatic outposts around the world to fly the Pride flag on the same flagpole as the U.S. flag at their embassy or consulate showcasing support for LGBTQ rights.

In a confidential cable reviewed by Foreign Policy and sent to diplomatic posts around the world, Blinken gave authority for diplomats to fly the Pride flag before May 17, which marks the international day against homophobia, transphobia, and biphobia, as well as June, which in the United States and many other countries is Pride month.

To be clear, the authorization is not an ‘order,’ but ‘permission’ allowing diplomats to do as appropriate per the location of the embassy.

Anti-LGBTQ conservative Franklin Graham has already whined about the news on his Facebook page writing,, “Just because something is ‘authorized,’ that doesn’t make it right!”

“Why should a flag representing one group of people and a specific agenda be literally raised up above all others and allowed to fly at our embassies and consulates?” 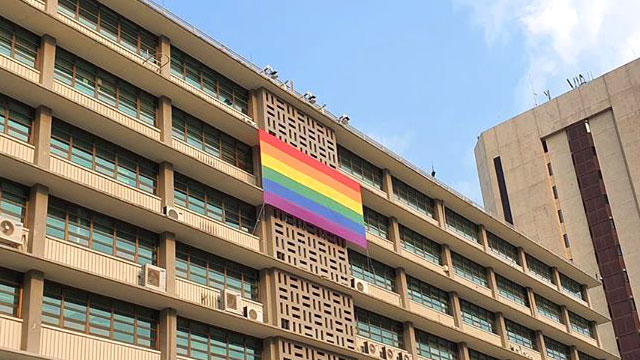 The Trump administration has ordered the U.S. Embassy in Seoul, South Korea, to remove a rainbow flag hung in support of LGBTQ Pride Month.

The instructions to remove the Pride Flag reportedly came from the offices of Secretary of State Mike Pompeo, who has a long history of anti-LGBTQ positions. The embassy in South Korea was also ordered to take down a banner in support of the Black Lives Matter movement.

CNN reports the two banners hung from the embassy building’s facade were originally placed there thanks to Ambassador Harry Harris.

The Twitter account for the U.S. Embassy in Seoul proudly shared photos of the Pride flag and Black Lives Matter banner prior to their removal.

The U.S. Embassy is displaying a rainbow banner on our Chancery in support of fundamental freedoms and human rights for all.  #PRIDE2020 #LGBTI #EqualProtection pic.twitter.com/yFcwrPhtxD

The U.S. Embassy stands in solidarity with fellow Americans grieving and peacefully protesting to demand positive change. Our #BlackLivesMatter banner shows our support for the fight against racial injustice and police brutality as we strive to be a more inclusive & just society. pic.twitter.com/Y4Thr2MRdw

The State Department cited the Black Lives Matter movement’s status as a non-profit organization as the reason for removing the BLM banner because “the US government does not encourage contributions to the group or promote any specific organization.”

But no reason was given for removing the Pride flag.

According to CNN, the Pride flag was removed on Monday just hours before the landmark ruling from the U.S. Supreme Court which affirmed federal protections for LGBTQ Americans in the workplace.

At the time, State Department spokeswoman Morgan Ortagus said Pompeo had no issue with rainbow flags being flown as long as it wasn’t from the embassy flagpoles.

“Secretary has the position that, as it relates to the flagpole, that only the American flag should be flown there,” said Ortagus.

The embassy in Seoul worked around the denial in 2019 by hanging the flag on the outside of the building, but clearly, that approach didn’t fly this year.

Contrast all this with the Obama years when the government granted blanket permission to fly rainbow flags during June in honor of LGBTQ Pride Month. Additionally, President Obama issued presidential proclamations recognizing June as Pride Month all eight years of his administration.