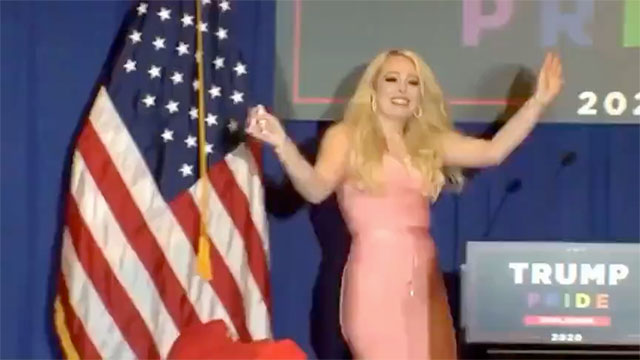 Tiffany Trump, the youngest daughter of Donald Trump, hosted a ‘Trump Pride’ event in Florida in hopes of attracting queer votes for her father’s reelection despite his dismal record on LGBTQ rights and protections.

“I know what my father believes in. Prior to politics, he [Trump] supported gays, lesbians, the LGBQIIA+ community,” Tiffany began before then talking about “fabricated lies” and social media.

She said: “It saddens me. I have friends of mine who reach out and they say how could you support your father, we know your best friends are gay.”

“I know what my father believes in,” said Tiffany Trump in a 10-minute speech at the Westshore Grand Hotel. “Prior to politics he supported gays, lesbians … the LGBQIA+ community, okay.”

Many have pointed out she left out the ‘T’ in the acronym which stands for trans.

The more you see, the worse it gets

Tiffany Trump is what happens when Miley Cyrus dresses up as Ivanka for Halloween. https://t.co/i2aFzzwHss

if i didn’t have better eyesight i would’ve actually mistaken this for an SNL skit with Miley as Tiffany. the missing T in LGBTQIA… this has to be satire pic.twitter.com/YobVPWNxc3

4. He tried to reverse Obama's protections for trans people in health care.