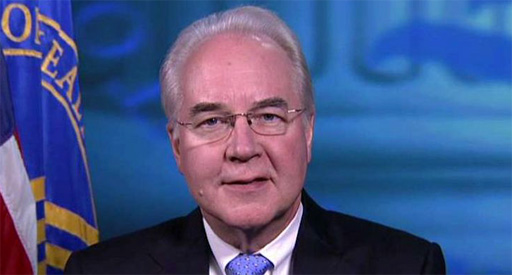 Saying he regrets that “recent events have created a distraction” for the Trump administration, Health and Human Services Secretary Tom Price offered his letter of resignation

The “events” that Price references are, of course, the nearly $1 million of taxpayer money in private chartered and military plane flights Price traveled by on government business.

Pretty swampity, swamp swamp if you ask me.

Politico first reported Price’s use of charter jets for official business last week and found that the secretary has traveled on charter flights at least 24 times since May, citing people familiar with his travel plans and a review of HHS documents.

Charter plane operators estimated 24 flights would have cost $400,000, Politico reported. Commercial trips would have cost thousands of dollars less. The Health and Human Services inspector general is reviewing whether the means of travel was appropriate.

Later, it was revealed that Price also took US military aircraft on two trips abroad, bringing the total cost of his non-commercial travel to more than $1 million. The military flights were approved by the White House.

On Thursday, Price offered to write a personal check to cover his private charter travel saying, “The taxpayers won’t pay a dime for my seat on those planes.”

But the optics worsened when it was revealed he planned to write a check for only $51,887.31, a miniscule percentage of the total cost of the private flights.

According to reports, Donald Trump was angered not only by the optics of the transgression, but also for appearing to overshadow the rollout of Trump’s tax reform proposal.

You can read Price’s resignation letter below. 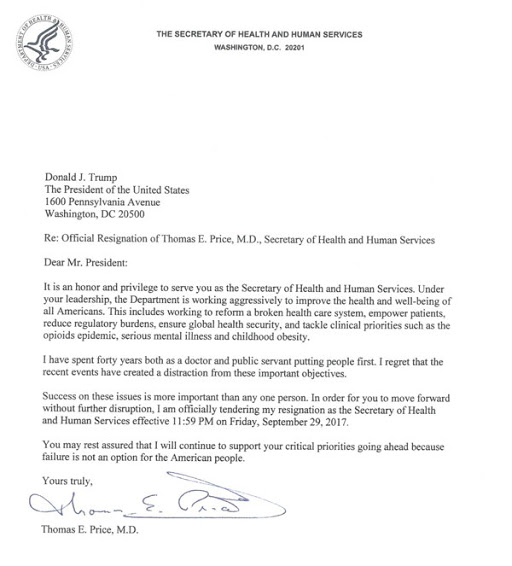 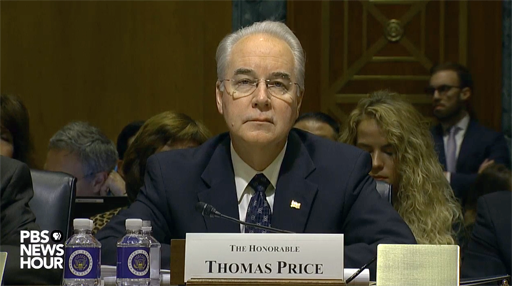 Congressman Tom Price of Georgia, President Trump’s nominee for Secretary of Health and Human Services, couldn’t give a clear answer today during his confirmation hearing regarding how strenuously he would implement Trump’s executive order to pull back on the Affordable Care Act.

Price, Trump’s pick to run Health and Human Services, dodged questions from lawmakers Tuesday about whether Trump’s order would force people from their current Obamacare coverage, despite promises from many Republicans they want to ensure the 20 million people insured through the law wouldn’t be hurt by efforts to replace it.

He also wouldn’t say whether HHS would wait until Congress readies a replacement plan before taking steps to dismantle the health care law. Price told the Senate Finance Committee, which will vote on his nomination, that he would promise to put “patients at the center of health care,” declining to tackle the questions directly.

And according to USA Today, Price answered practically every question with some version of, “Every single American will have access to coverage that is affordable.”

To be honest, I have access to buying a million dollar home, but I can’t afford one.