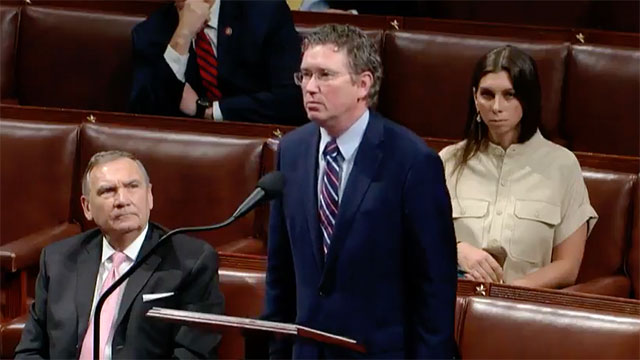 The far-reaching legislation stands as the largest emergency aid package in US history. It injects a massive financial boost into a struggling economy with provisions aimed at helping American workers, small businesses and industries grappling with the economic disruption.

Key elements of the package include sending checks directly to individuals and families, an expansion of unemployment benefits, money for hard-hit hospitals and health care providers, financial assistance for small businesses and $500 billion in loans for distressed companies.

The bill now heads to Donald Trump’s desk where he will sign it into law later today.

As I previously reported, Rep. Thomas Massie went into the chamber with a pre-announced plan to call for a full vote by the House members. Because of that threat, hundreds of lawmakers were forced to return to Washington to ensure a quorum was present.

When Massie asked for his voice vote, Rep. Anthony Brown, the presiding officer in the speaker’s chair, pointed out that not enough members stood up to back his request. House rules require one-fifth of lawmakers to stand up in support of such motions.

“A quorum is present. The motion is adopted,” he ruled.

Rep. Thomas Massie tried to get a recorded vote and hold up the stimulus bill.

Just passed the $2.2 trillion stimulus. Took longer than it should’ve (and required travel to DC) because of one member of Kentucky who couldn’t put our country ahead of his own ego. He owes all Americans an apology for this reckless stunt.