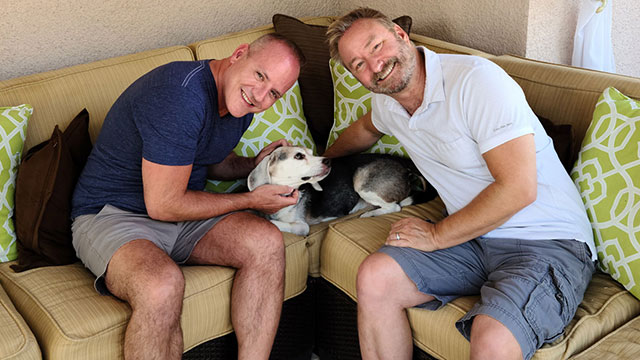 • Dog Life: I wanted to share a new addition to our family here at The Randy Report,  the handsome Snoopy (above), a 14-year-old beagle rescue. After serious consideration, Michael and I decided we didn’t want Snoopy to live his last years without a forever family, and we feel that this journey will be completely different from our 23 years raising the ‘dachshund dynasty’ from puppyhood. Snoopy is settling in quite well, and we can’t wait to spoil him with attention and love.

• ESPN: Thomas Beattie, a British former pro footballer for Warriors FC in Singapore, came out as gay in an essay for ESPN on Tuesday. “I prayed that I would wake up and this would all disappear, although deep down I knew I was praying for the wrong thing. I needed to ask for the strength to accept myself.”

• New Music: St. Panther shares her latest single/music video, “These Days,” was written in memory of a friend who overdosed on the night of his birthday. “This song is my real-time experience with re-establishing a new relationship to life in the days following through the simple act of making it to the next day,” the artist explains. The track blends raw feeling over a hypnotic hybrid of soul swagger, jazz eloquence, and hip-hop heat. The video was created by the artist herself.

• Spectrum News: Donnie Lee Barrigar, a self-described flat-earther, recorded himself taking down a Pride flag flying over City Hall in Watertown, NY, and throwing it away. In posting his video online, Barrigar wrote the First Amendment gives him the right to do what he did. Last year, before a pride event in the city, he posted to social media how he wished a mass shooting would happen. Gov. Cuomo has directed the New York State Police to assist Watertown Police in this investigation.

• Reuters: The organizers of Singapore’s annual gay pride Pink Dot rally vowed on Tuesday to push ahead with an online event after nearly 30,000 people signed a petition demanding restrictions and called the content “immoral”.

• Baltimore Sun: A video went viral after a Black child was denied entry to Baltimore’s Ouzo Bay restaurant due to its ‘dress code’ while a white child was captured in the same video wearing the same clothing finishing his meal. The parent company, Atlas Restaurant Group, issued an apology.

He had no answer for her. Dress codes only apply to us. pic.twitter.com/QaZyLqX1eY

Today, we learned of an incredibly disturbing incident that occurred at one of our restaurants in Baltimore, Ouzo Bay. We sincerely apologize to Marcia Grant, her son & everyone impacted by this painful incident. This situation does not represent who or what Atlas stands for. pic.twitter.com/jsofGRLVw1 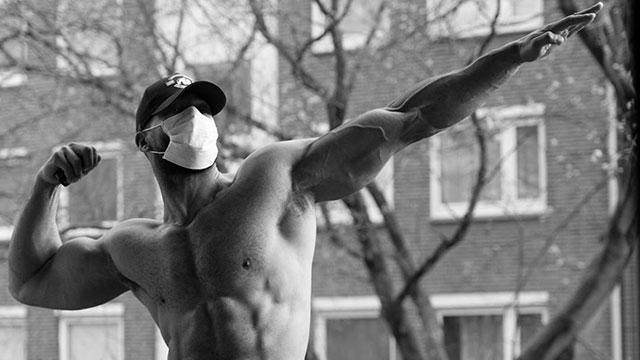 • InstaHunks: Hunky Green.Joel (above) makes it black and white – he wants you to “Rise up and attack the day with enthusiasm!!”

• Boy Culture: Matt Rettenmund pays tribute to Madonna on the 30th anniversary of the Blond Ambition Tour with lots of rare video clips from the record-setting production.

• Out Music: California native St. Panther recently released her debut single, “Infrastructure,” in advance of her upcoming album later this summer. The out hip-hop artist brings a 90s sensibility to a very ‘now’ soul sound. Drop the beat below.

• LA Times: Event production companies, that usually build tents, staging and facilities for tens of thousands of revelers at music, sports and dining events have seen hundreds of such events canceled. But they are now busy using their resources to help build temporary hospital stations to help accommodate the COVID-19 pandemic.

• NY Times: A member of the crew of the coronavirus-infected USS Theodore Roosevelt died Monday of complications related to the disease, 11 days after the aircraft carrier’s captain was fired for pressing his concern that the Navy had done too little to safeguard his crew. Of the 4,860 crew members aboard the Roosevelt, 585 have tested positive for COVID-19.

• NY Post: Bishop Gerald O. Glenn, the Pastor of New Deliverance Evangelistic Church in Richmond who proudly defied coronavirus safety guidelines in order to hold church services, died from COVID-19 complications on Saturday. He told the congregation he’d keep preaching “unless I’m in jail or the hospital” because “people are healed” in his church.

• Broadway Cares: The stream of Broadway Cares/Equity Fights AIDS’ benefit concert celebrating Disney on Broadway’s 25th anniversary will be rescheduled for Friday, April 17, 2020, at 7 PM ET after the American Federation of Musicians dropped its opposition to the stream. The online playback will raise money for Broadway Cares’ COVID-19 Emergency Assistance Fund, which is helping everyone in the theater and performing arts community impacted by the pandemic.

We are so thrilled to share that our stream of Celebrating 25 Magical Years of @disneyonbroadway hosted by @frozenbroadway’s @mccarya, and benefiting our COVID-19 Emergency Assistance Fund, has been rescheduled! Watch on Friday, April 17 at 7 pm Eastern on our website, Facebook Page and YouTube Channel. Thanks to everyone for your support!