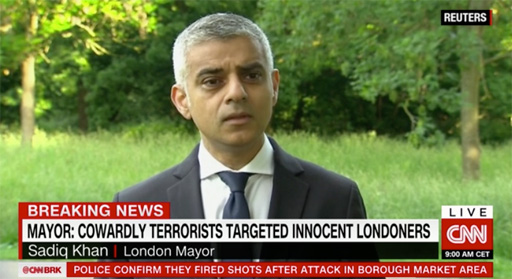 Driving a white van, the three men killed seven and injured dozens driving across the London Bridge. They then left the van and entered the capital’s Borough Market with large hunting knives, slashing at patrons.

Within minutes, the police chased down the men and killed them.

In a statement, London Mayor Sadiq Khan said: “Londoners will see an increased police presence today and over the course of the next few days. There’s no reason to be alarmed. One of the things the police and all of us need to do is ensure that we’re as safe as we possibly can be.”

President Trump’s response to the terror attacks in London last night was to take aim at the city’s mayor and that statement.

At least 7 dead and 48 wounded in terror attack and Mayor of London says there is “no reason to be alarmed!”

As he has done often in the past, Trump took the Mayor’s statement out of context. The mayor wasn’t saying there was no need to be alarmed by the attacks. He was clearly saying to Londoners not to be alarmed by the increased police presence people will be seeing over the next few days.

Because that’s what the mayor needs right now, the president of another country criticizing him in the middle of a terror attack.

Can you imagine Prime Minister Theresa May chiding the mayors of Orlando or Boston after their horrible attacks?

A spokesman for the mayor responded to the tweet saying, “The Mayor is busy working with the police, emergency services and the government to coordinate the response to this horrific and cowardly terrorist attack and provide leadership and reassurance to Londoners and visitors to our city.”

He added that Mayor Khan “has more important things to do than respond to Donald Trump’s ill-informed tweet that deliberately takes out of context his remarks urging Londoners not to be alarmed when they saw more police — including armed officers — on the streets.”