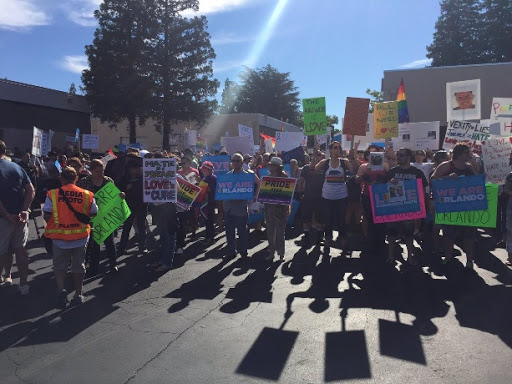 “Are you sad that 50 pedophiles were killed today? No. I think that’s great.”

Those are just some of the words used by Pastor Roger Jimenez last Sunday when he praised the massacre of LGBT people at Orlando nightclub.

More than 500 people gathered early Sunday morning outside the Sacramento church where last week a pastor gave an inflammatory sermon praising the massacre of LGBT people in an Orlando nightclub.

Chants of “Love conquers hate” rang out when worshippers walked down the police-protected entrance to Verity Baptist church in an office park on Northgate Boulevard.

Protesters with megaphones urged peace and non-violent protest when a man with a “Gay = pervert” sign approached the police barricade to debate the crowd.

Last Sunday, after news broke of the Orlando mass shooting, the worst in U.S. history, Jimenez told his congregants that he wished the shooter had killed more people in the gay nightclub Pulse. He said God has put a death sentence on gay people.

“There’s no tragedy,” Jimenez said. “I wish the government would round them all up, put them up against a firing wall, put a firing squad in front of them, and blow their brains out.” 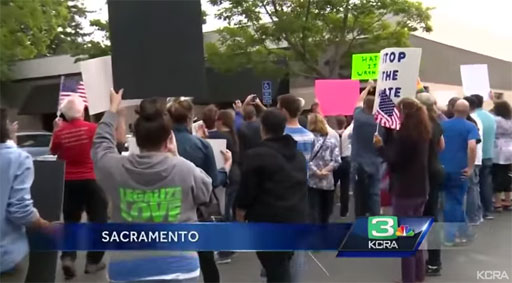 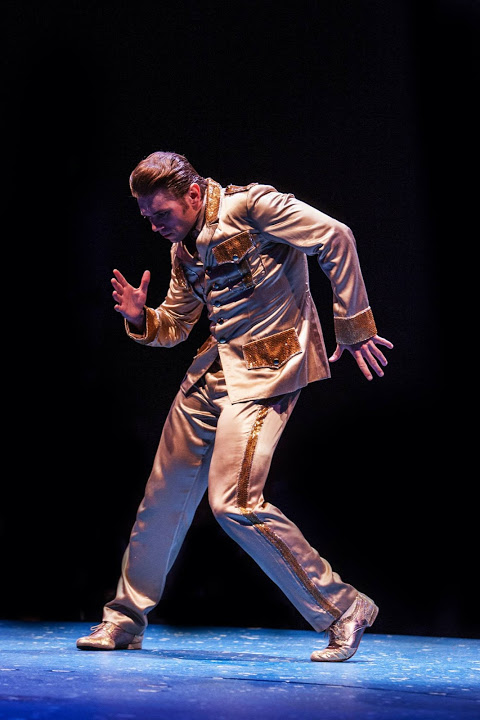 Regular readers of The Randy Report know I split my career between writing about LGBT and pop culture issues here and working in the theater.

The past two weeks my posting here has been a little light as I’ve been choreographing a new production of the all-American musical Bye Bye Birdie for Sacramento Music Circus. Artistic Director Glenn Casale invited me and a fab cast on a terrific journey bringing this classic to life again.

I’ve received some emails asking how the show went, so I’m happy to share this montage of clips from the opening night performance.

Make sure you catch the moment between my partner in crime/Associate Choreographer Kat Murphy as she reacts to “Conrad Birdie” (Nate Hackmann) at the 4:02 mark. Nate, Kat and the whole company stopped the show with that performance of “Honestly Sincere.”

Loved the whole experience. If you’re in the Sacramento area this week, head over to Sacramento Music Circus and see the result of our work. It’s fun. 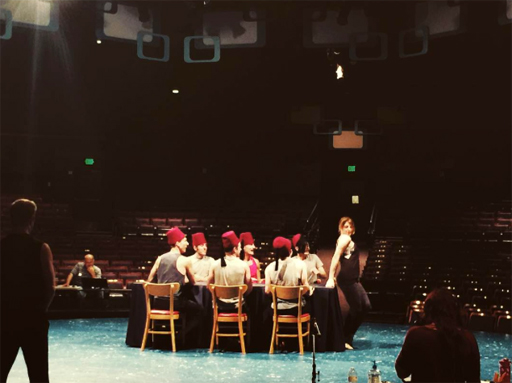 Rehearsing “The Shriners Ballet” from Bye Bye Birdie at Sacramento Music Circus yesterday with the fab Janine Divita (“Rose”) and the men of the ensemble. )That’s me in the lower left hand corner).

Today we get the drummer in for couple of hours, which always jazzes the dancers 🙂 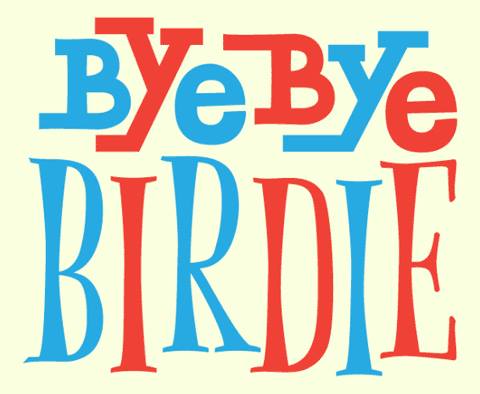 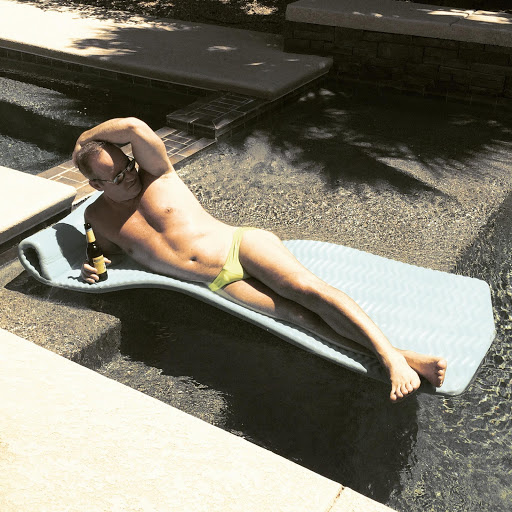 Spent the day being lazy by the pool with the hunky hubby Michael.

When he’s relaxing by the pool, Michael insists on 80s rock hits – I think he was singing along to Journey here. I”m a smooth jazz kinda guy myself. Michael didn’t know I was taking this pic…

He has press days coming up with celeb clients and I’m heading to Sacramento to choreograph BYE BYE BIRDIE for Sacramento Music Circus this coming week. So, might be the last lazy day for a while.

Regular readers of The Randy Report know I”m still active in the theater, and this is the third gig for me at Sacramento. I’ve previously posted about my experiences with CHICAGO and A CHORUS LINE there.

The next few weeks will include posts about the evolution of BBB at the Music Circus, so be prepared 🙂

I’m “Honestly Sincere” when I “Put On A Happy Face” and share that I’ll be heading back to Sacramento Music Circus this summer to choreograph BYE BYE BIRDIE!

This will be my 3rd summer dancing with the “Kids” at Sac Music Circus, and we “Got A Lot Of Livin’ To Do” before everything is “Rosie.”

Definitely looking forward to it. As always when I’m working in the theater, The Randy Report will continue – just means some double duty for a while. But I love doing both. I’ll share the backstage process of putting on a show from as many perspectives as I can.

If you’re in Sacramento in early July, opening night is July 7th! Come down and say hi 🙂 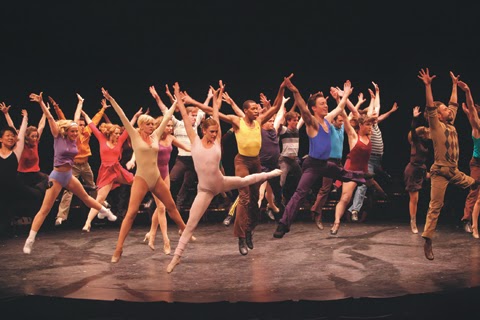 Finally getting a chance to exhale as I’ve spent the past two weeks in Sacramento choreographing what feels like a new, fresh and creative A Chorus Line for Sacramento Music Circus.

Uber-proud of the fab cast and crew there. We opened Tuesday night this week to excellent reviews (thank you, thank you, thank you – grateful), and now I’m back at home in Las Vegas with hubby Michael, Bruno the wonder dog and the rest of the pups.

I can only describe this as a truly calm, creative and collaborative experience working with one of the best and most respected directors in theater today – Stafford Arima. The producers of the theatre thought we would make a good team, and I’m happy to say it was a joy from beginning to end.  I think it’s rare you walk into an experience with a new “team-mate” and find such a solid connection and unified artistic vision.  Everyone connected to the production from Stafford to our music director Valerie Gebert to the designers who brought the show to life were all on the same page.

I will admit there was a tiny amount of trepidation on my part in taking the job since, as you can guess, A Chorus Line makes “the line” an integral part of the show.   Staging a show that is iconically about a line –  IN THE ROUND – can make for some big creative leaps in order to honor the Pulitzer prize-winning material.

I’ve been associated with the show for 29 years, performing it for the first time in 1985. Since then, I’ve been a part of the show as an actor in many national and regional productions (with original cast members Donna McKechnie, Baayork Lee and Kay Cole), and as director/choreographer of several productions in my own right.

Releasing my decades of experience with the show could have been much more difficult, except for our secret weapon – director Stafford Arima. Stafford did not have a history with the show. And that, coupled with his innate talent for questions and creativity moved the show from just another “step, kick, kick, leap, kick, touch” to a very new, “out of the box” production.

When my muscle memory would sometimes kick in, and I’d think “how do we…?,” Stafford would ask “do we have to do it that way…? What if we…?  Could we…?” and suddenly new ideas became reality.

Do we have to form a single line in the finale?  Can “At The Ballet” spread out to the entire theater?  Can we use mirrors in the production without blocking the audiences view?

“Deconstructed” became the catch word.  And as Martha Stewart would say, “This is a good thing.”

The only things I made sure I brought to the production were ideas/concepts that I had learned over the years from original Broadway cast members that honored the integrity of the piece. The voice of the individual; that everyone is special.  The further and further we got into the rehearsal process, the more comfortable I was that we were doing Michael Bennett (the original Tony Award winning director/choreographer) proud in sharing the intent of the piece.  It was never about starting on the right or left foot – it was about what were we saying.  As Stafford would say over and over “Trust the text.”  I would add, “the Pulitzer Prize-winning” text.

I did find one special place with which to land the iconic “logo” line of the show.  That made me happy.  To find out where, come see the show 🙂

Sacramento Music Circus photog Charr Crail (production pics) and cast member John Williford (rehearsal and opening night pics) shared several photos with me that I’ve posted here to give you a sense of the journey that is this A Chorus Line.

Should you be interested in what the critics had to say, you can read the Sacramento Bee and Broadway World reviews by clicking those links.  I’m very grateful for the kind words all around.

And, there’s a video montage from the production featuring this fab cast below.

Thanks to all at Sacramento Music Circus.

Kick, ball, change and thanks to everyone for doing “what you do for love.” 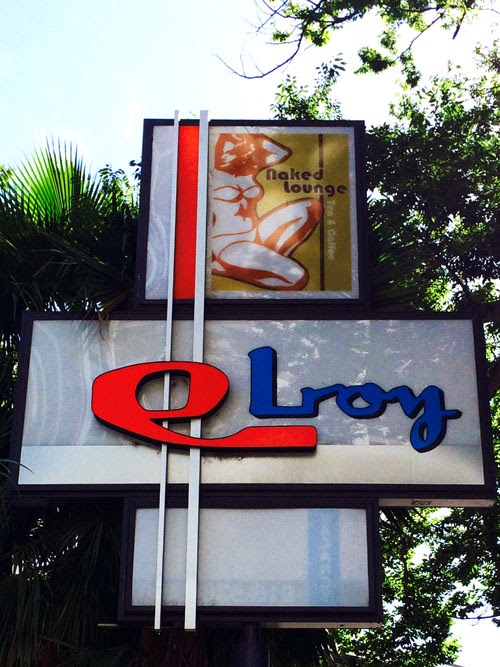 Around the corner from my hotel – “Naked Lounge.”

How did I miss this for 9 days? 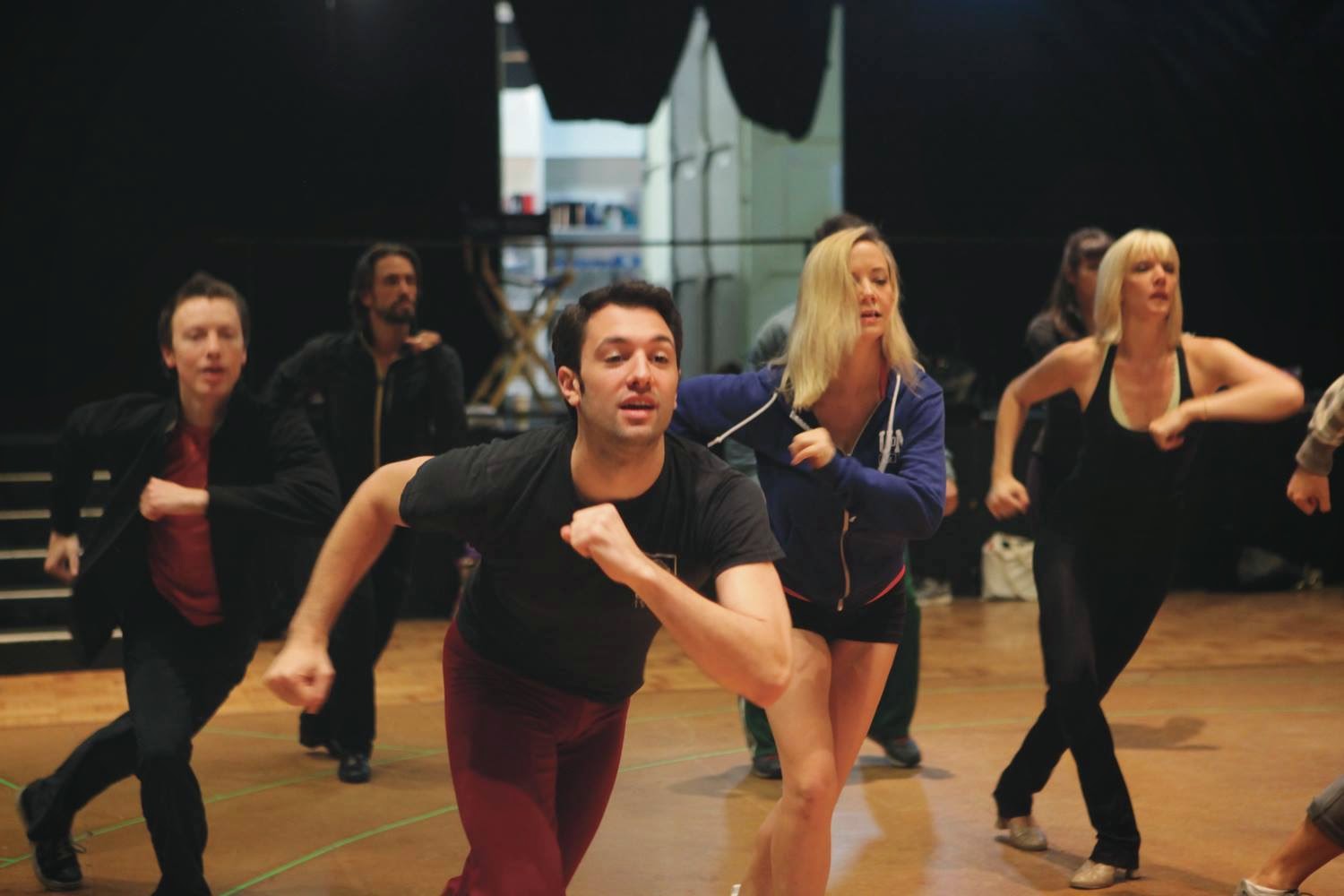 Hard to believe, but it was 29 years ago this summer that I first performed in A Chorus Line – “in the round” at Casa Manana in Fort Worth, TX.

And here I am choreographing the show “in the round” now in Sacramento. Carly Simon once wrote “I know nothing stays the same, but If you’re willing to play the game, you know it’s coming around again…” Glad to know she was right.

Sacramento Music Circus had a photographer at a recent rehearsal, so I thought I’d share a few of the pics.  Way proud of this cast.