Russian businessman Yevgeny Prigozhin, a close ally of President Vladimir Putin, bragged on Monday he had interfered in U.S. elections and would continue doing so in future. END_OF_DOCUMENT_TOKEN_TO_BE_REPLACED 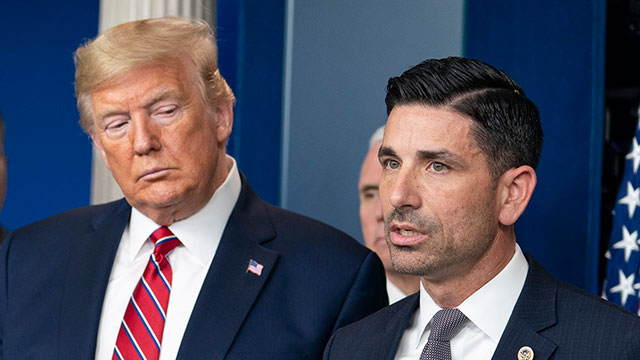 A whistleblower alleges that top officials in the Department of Homeland Security instructed analysts to modify intelligence assessments to ensure they matched up with misleading public comments from Trump about Antifa and “anarchist” groups.

Top officials with the Department of Homeland Security directed agency analysts to downplay the threat of violent white supremacy and of Russian election interference, according to a whistle-blower complaint filed by a top intelligence official with the department.

Brian Murphy, the former head of the intelligence branch of the Homeland Security Department, said in a whistle-blower complaint filed on Tuesday that he was directed by Chad F. Wolf, the acting secretary of the department, to stop producing assessments on Russian interference.

The department’s second highest-ranked official, Kenneth T. Cuccinelli II, also ordered him to modify intelligence assessments to make the threat of white supremacy “appear less severe” and include information on violent “left-wing” groups, according to the complaint, which was released Wednesday by the House Intelligence Committee.

Trump has regularly downplayed the threat of white supremacist violence during his time in office, including his infamous remarks that there were some “fine people” among the extremists who instigated violence in Charlottesville, Virginia, in 2017.

Murphy previously oversaw the intelligence division at DHS but was reassigned in August. He says the personnel change was retaliation for after he compiled intelligence reports on journalists and protesters in Portland, Oregon. He’s asking the inspector general to investigate.

Whistleblower Complaint: “Mr. Cuccinelli stated that Mr. Murphy needed to specifically modify the section on White Supremacy in a manner that made the threat appear less severe, as well as include information on the prominence of violent ‘left-wing’ groups.” https://t.co/9alng1aZR2

– Lied about Intelligence to justify “The Border Wall” 🔥 pic.twitter.com/XjQsdWy6SL