The Human Rights Campaign joins with attorney Robbie Kaplan to launch an unprecedented “People’s Brief” to the U.S. Supreme Court.

Kaplan, leading civil rights litigator who won a landmark Supreme Court ruling in United States v. Windsor striking down Section 3 of the discriminatory Defense of Marriage Act in 2013, is the author and lead counsel on the brief.

The historic effort, joined by Edie Windsor as first signer, gives every American a chance to share their view on marriage equality with the Supreme Court. 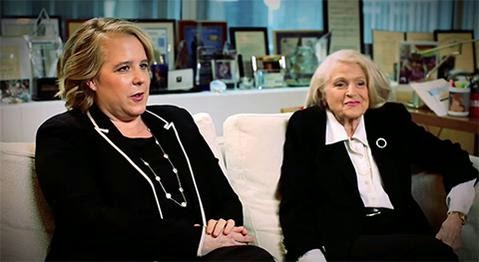 According to the Clarion Ledger,  Roberta Kaplan – lead counsel for the plaintiffs in the Mississippi same-sex marriage lawsuit – ripped through her reasons in favor of same-sex marriage in rapid-fire style today.

Kaplan, who successfully argued in favor of gay marriage before the U.S. Supreme Court in the U.S. versus Edith Windsor case, had to excuse herself at times for speaking too quickly as she quickly listed her reasons why she believes the state’s gay-marriage ban violates the constitution and her clients’ rights, all the while noting documented case law in support of her arguments.

Things did not go so well for the other side, however. Actually, the Clarion Ledger used the word “stumble” in their assessment.

Lead counsel for the state, Justin Matheny, admitted a lack of working knowledge on the subject saying “When I found out I would be the one to come to court and argue this case, I had to do some research.”

This pretty much sums up how things went for the anti-gay side of the argument:

Judge Reeves to Matheny: “What is the state’s rational basis that same-sex couples can’t marry … and its prohibition of same sex couples from adopting children when all a child wants is to be loved, and they don’t care by whom?”

Matheny cited “responsible procreation” as his response, meaning that the state wants marriage only between couples who can responsibly procreate.

“You allow people in prison to be married, and there are no more conjugal visits,” Reeves argued. “Old people can marry” and they can’t bear children “with the exception of Abraham and Sarah.”