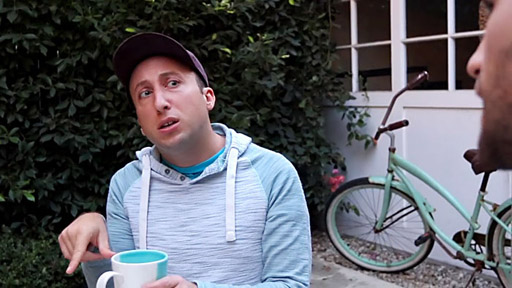 Back in August, I covered psychotherapist Matthew Dempsey’s YouTube video breaking down the concept of “pretty privilege.”

Comic Michael Henry decided to take a crack at understanding “pretty privilege” by chatting with a ‘privileged gay man’ (played in the video by Eduardo Sanchez-Ubanell).

According to Eduardo, the term is “a scientific term used by doctors.”

“It’s what happens when you have a really great face, a full head of hair, sexy eyebrows, tight ass, quarter-sized nipples, eight inch penis…” explains Eduardo in rapid fashion. “All the traits that gay men unanimously like, and I happen to have all of them.”

But even for those lucky enough to find themselves born to “noblesse oblige,” it’s not all sunshine and rainbows.

Oh no, the list of ‘disadvantages’ to pretty privilege can be long, as Eduardo explains:

“I’m always invited to sex parties I don’t have time for, people just offer me drinks, drugs, jobs, I always have to update my Amazon wish list because it keeps getting fulfilled, money just gets Venmoed to me randomly, people always ask me for my Only Fans page and I don’t have one – yet!”

But Michael Henry isn’t so convinced about the “disadvantages to the privileges and advantages” that Eduardo says he receives thanks to his looks.

“Honestly, I think you sound like a moron,” declares Henry. “I don’t feel bad for you, I don’t think that you’re privileged and I don’t think you should be whining about your perceived advantages to which you think is better looking than other people.”

Check out the funny (but pointed) exchange below. And you can find more from funny man Michael Henry at his YouTube channel here.