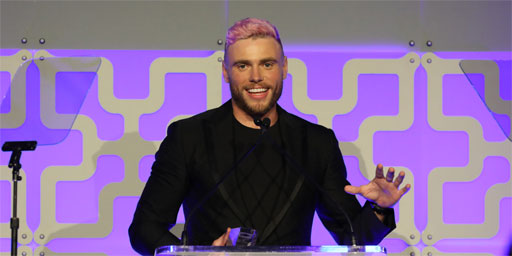 Olympic medalist Gus Kenworthy was honored this past Monday at the Point Foundation’s 2019 New York gala.

The Point Foundationempowers promising LGBTQ students to reach their full academic potential – despite the obstacles often put before them – to make a significant impact on society.

Point is the largest scholarship granting organization in the United States for LGBTQ students of merit.

Introduced by Queer Eye’s Jonathan Van Ness, Kenworthy accepted this year’s Point Leadership Award by remembering his own school years when he was closeted.

Speaking of the LGBTQ students in the room, he noted how “incredibly inspiring” they are to him as they live their truths today “unashamed and unapologetically.”

“I wish that I had the courage to be myself when I was in high school,” he admitted “But it took me many years to get to that point.”

The Olympic silver medalist addressed the “stress and anxiety” queer adolescents face during those years.

“We often face ridicule and we fear torment,” he continued. “My time spent in the closet is a blur of depression and anxiety.”

Noting that he did experience high points during those times – becoming a professional skier, graduating high school, making his first Olympic team and scoring his first Olympic medal – the 27-year-old candidly shared that, “I didn’t really enjoy those moments to their fullest because I truly wasn’t present for them.”

In keeping up a facade of ‘straightness,’ he says he didn’t really feel the gravity of winning an Olympic medal.

And, echoing sentiments we heard from White House hopeful Mayor Pete Buttigieg this past weekend, Kenworthy admitted that he tried to wish away being gay.

“I remember wishing more than anything else that I were just straight,” he told the audience. “I would literally pray that I might wake up and not be gay anymore. I would be ‘normal’ and the rest of my life would be easy. I worked twice as hard at everything I did to make up for the fact that I was gay – something I thought was a shortcoming at the time.”

But coming out – something he used to fear – would be his salvation.

Kenworthy explained that once he came out in 2015 via ESPN Magazine, he had his best ski season ever. And he hadn’t changed a single thing about his training or approach to his sport.

Except – “I was finally competing as myself.”

“And that little extra bit of energy, that I’d previously spent worrying, stressing, compartmentalizing, that extra little bit was my ticket to success.”

Kenworthy then listed many of the fearsome obstacles young LGBTQs face today including “violence” and “isolation.”

He became emotional intoning the danger gays around the world contend with, like being stoned to death in countries like Brunei.

And here in the U.S.: “We have a president who has made repeated attacks on our community, on our trans brothers, sisters, and gender non-binary siblings.”

“We have a Vice President who still believes in conversion therapy, for f*cks sake,” he added.

However, expressing his confidence that the next generation of LGBTQ youth will create a bright future, he offered this in closing: “Continue spreading your charisma, uniqueness, nerve and talent – because shantay, you stay!”

Click here to learn more about the Point Foundation.

View this post on Instagram
Last night, Queer Eye groomer turned gymnast and figure skating icon @JVN presented me with the @PointFoundation Leadership Award! Can you believe?! I barely can, it was a huge honor. Point does incredible work for the LGBTQ community by providing education grants to young queer students who, in the face of adversity, have excelled in their academics. I gave a speech (I publicly wept into a microphone) talking about how proud I am of the young Point scholars for living their truths and bettering themselves and, in turn, the world. If you’d like to know more about the work that Point does or if you’re a young queer person in need of a little help furthering your education, click their tag and check them out! ❤️
A post shared by gus kenworthy (@guskenworthy) on Apr 9, 2019 at 9:43am PDT 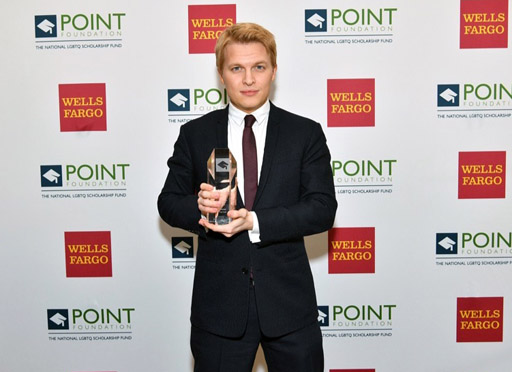