Jerry Sandusky has been sentenced to at least 30 years in prison in the child sexual abuse scandal that brought shame to Penn State and led to coach Joe Paterno’s downfall.

The NCAA announced the penalties for Penn State’s role in the Jerry Sandusky scandal today:

Penn State was socked with a four-year postseason ban, the loss of 40 scholarships over four years and a $60 million fine stemming from its coverup in the sake of the Jerry Sandusky child sex-abuse scandal. In addition, all victories from 1998-2011 have been vacated, a huge blow to the coaching legacy of Joe Paterno, the winningest football coach in college football history. NCAA President Mark Emmert announced the penalties, saying that “one of the dangers in our love of sports is that sports themselves can become too big to fail, too big to challenge.”

The $60M fine will be used to create a fund for the victims of sexual abuse.

“Joe Paterno wasn’t perfect. He made mistakes and he regretted them. He is still the only leader to step forward and say that with the benefit of hindsight he wished he had done more. To think, however, that he would have protected Jerry Sandusky to avoid bad publicity is simply not realistic. If Joe Paterno had understood what Sandusky was, a fear of bad publicity would not have factored into his actions.

“We appreciate the effort that was put into this investigation. The issue we have with some of the conclusions is that they represent a judgment on motives and intentions and we think this is impossible. We have said from the beginning that Joe Paterno did not know Jerry Sandusky was a child predator. Moreover, Joe Paterno never interfered with any investigation. He immediately and accurately reported the incident he was told about in 2001.

“It can be argued that Joe Paterno should have gone further. He should have pushed his superiors to see that they were doing their jobs. We accept this criticism. At the same time, Joe Paterno and everyone else knew that Sandusky had been repeatedly investigated by authorities who approved his multiple adoptions and foster children. Joe Paterno mistakenly believed that investigators, law enforcement officials, University leaders and others would properly and fully investigate any issue and proceed as the facts dictated.

“This didn’t happen and everyone shares the responsibility.”

Read the whole statement on CNN

As CNN reports, Penn State’s most powerful leaders showed “total and consistent disregard” for victims of child sex abuse and failed to protect children, according to the findings of a long-awaited internal review over how the university handled a scandal involving its former defensive coordinator.

In a statement released along with the 267-page report, Louis Freeh, the former FBI director and federal judge who spearheaded the review, blasted several top former officials at the school, accusing them of forging an agreement to conceal Sandusky’s attacks.

“There are more red flags here than you can count,” said Freeh, who added that the abuse occurred just “steps away” from where Paterno worked in the university’s Lasch Building.

“Our most saddening and sobering finding is the total disregard for the safety and welfare of Sandusky’s child victims by the most senior leaders at Penn State,” Freeh wrote. “The most powerful men at Penn State failed to take any steps for 14 years to protect the children who Sandusky victimized.”

I’m not sure what that means, to be honest. Can they possible have been under the impression that embarrassing an older man because he molested a young boy would be “worse” than exposing a possible predator?

I’m looking forward to seeing the full context of the emails described in the news report. 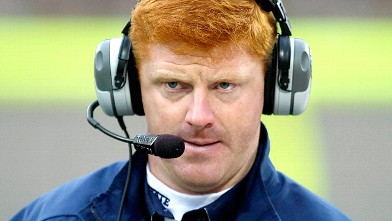 McQueary, who played at Penn State in the 1990s, was the one who told the grand jury he had witnessed Jerry Sandusky raping a child in a Penn State shower in 2002, when McQueary was a graduate assistant coach.

In a series of tweets from Alexander’s feed, he quotes McQueary as saying:

I have to ask the question though: why didn’t he call the police? And looking back, does now think he should have?

Also, in his grand jury testimony – nothing is said about “stopping” anything.  All it says is “the graduate assistant left immediately, distraught.”  See the testimony here – bottom of page 6, top of page 7.

I agree with Jon Stewart – I’d hate to see these college students young years scarred by not having the football coach they love.

Yes, that was sarcasm… 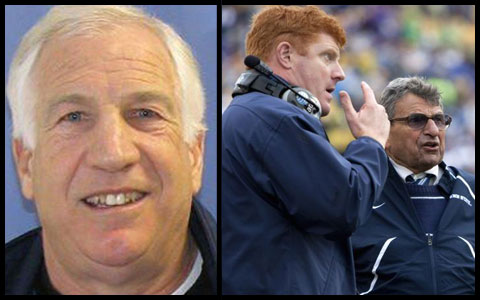 As the students of Penn State rally in support of Joe Paterno, who was fired for being implicated in the child abuse scandal that has rocked the school, the details revealed in the grand jury report are becoming more and more clear.

A former Penn State assistant coach, Jerry Sandusky, has been charged with more than 40 counts of sexual abuse.

In an article for The Daily Beast today, Buzz Bissinger – in clear language – writes about what has been alleged and what was NOT done.

The horror of it all, both in terms of what Sandusky allegedly did and what Penn State officials did not, can be summed up by a single sound.

It is a “rhythmic, slapping” sound, according to page 6 of the grand-jury report. It is heard by a 28-year-old football graduate assistant named Mike McQueary in the locker room of the Lasch Football Building on the Penn State Campus at 9:30 on the Friday night of March 1, 2002.

McQueary is placing some new sneakers into his locker. At first he finds it odd that the lights and showers are on. Then he hears the sound coming from the showers. He looks inside and according to his grand-jury testimony, sees the cause of the sound: a naked child of roughly 10 years old with his hands up against the wall with a naked Sandusky butt-f–king him from behind. Sadistic, yes. Sick, yes. Beyond disturbing, yes. Deviant, yes. Immediate grounds for calling the police? Of course, yes. The upshot?

Nothing. Nada. Not a goddamn thing but the passing of the buck up the food chain of bureaucratic bullshit where too many people know that something awful has happened and try to bury it.

McQueary, who witnessed the incident, witnessed it, doesn’t call the police, although he is 28. He runs to his daddy. His daddy advises him to tell Paterno. He tells Paterno. The great JoePa, who regardless of his noncredible insistence in grand-jury testimony that he was never told the specific nature of the sexual act, does at the very least acknowledge that McQueary did relate to him that Sandusky was “fondling” a young boy.

What staggers the mind is Paterno admitting that McQueary told him, at the very least, that Sandusky was “fondling” a young boy and all Paterno did at the time was report it to his superiors. NOT go to the police. NOT tell McQueary to go to the police.

And why on earth did McQueary, a former Penn State quarterback, not stop what he saw going on in the showers? At the time, McQueary was 28 years old and fit. He could have stormed into the showers and stopped this but he did not.

This boggles the mind.

McQueary will be coaching Penn State this weekend. Hard to imagine why. There are theories that the Pennsylvania attorney general’s office doesn’t want to lose McQueary as a cooperative witness, should the AG decide to pursue legal charges against Paterno for not doing enough in 2002, and the AG’s office has asked the school not to alienate McQueary by firing him. Maybe, maybe not.

But to think that this guy witnessed what is alleged he saw and did so little is incredible.  And sad.