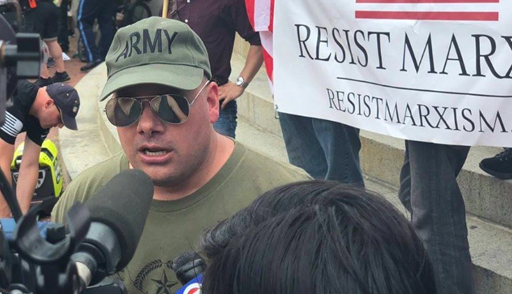 More bad news for the organizers of the so-called ‘Straight Pride Parade’ scheduled to happen in Boston on August 31.

In an entry on the group’s website, Super Happy Fun America (SHFA), organizer Mark Sahady shares that PayPal has “permanently limited” their account. This apparently means the group can’t collect any more donations via the popular online money transfer service.

The letter goes on to say SHFA can still withdraw whatever funds are in their account, but the organizers are to “remove all references to PayPal” from their site.

Sahady spins this as – you guessed it – intolerant ’heterophobia.’

As I’ve previously reported, numerous corporations have refused to do business or be associated with the group.

Netflix, TripAdvisor, Bank of America and many more have sent cease-and-desist letters to SHFA for using their logos on the ‘Straight Pride Parade’ website.

In his blog post, Sahady tries to take credit for a recent drop in Netflix’s stock saying, “Thanks to all our fans who canceled their accounts in protest at the intolerance for our Straight Pride movement.”

In reality, the drop in stock price at Netflix occurred after reporting second-quarter earnings which missed target numbers. It was the first-ever drop in global growth.

All of that took place between April and June – before Netflix sent its cease and desist letter.

In other words – liars.

Several observers, including Fox News pundit Jesse Watters, have questioned the intentions of the group asking if they are just “trying to be provocative” as a response to LGBTQ Pride Month.

In fact, the organizers of the Boston march have been shown to have ties to violent extremist groups like the Proud Boys, whose chairman is scheduled to speak at the event.

NowThis has compiled this report exposing the wild, exaggerated claims by the organizers.

As a result of the recently passed HB 2, which legalizes discrimination against LGBTs in North Carolina, PayPal has cancelled plans to bring a new operations center (and 400 jobs) to Charlotte, North Carolina.

From the official statement from PayPal CEO Dan Schulman:

Two weeks ago, PayPal announced plans to open a new global operations center in Charlotte and employ over 400 people in skilled jobs. In the short time since then, legislation has been abruptly enacted by the State of North Carolina that invalidates protections of the rights of lesbian, gay, bisexual, and transgender citizens and denies these members of our community equal rights under the law.

The new law perpetuates discrimination and it violates the values and principles that are at the core of PayPal’s mission and culture. As a result, PayPal will not move forward with our planned expansion into Charlotte.

This decision reflects PayPal’s deepest values and our strong belief that every person has the right to be treated equally, and with dignity and respect. These principles of fairness, inclusion and equality are at the heart of everything we seek to achieve and stand for as a company. And they compel us to take action to oppose discrimination.

Our decision is a clear and unambiguous one. But we do regret that we will not have the opportunity to be a part of the Charlotte community and to count as colleagues the skilled and talented people of the region. As a company that is committed to the principle that everyone deserves to live without fear of discrimination simply for being who they are, becoming an employer in North Carolina, where members of our teams will not have equal rights under the law, is simply untenable.

While we will seek an alternative location for our operations center, we remain committed to working with the LGBT community in North Carolina to overturn this discriminatory legislation, alongside all those who are committed to equality.

We will stand firm in our commitment to equality and inclusion and our conviction that we can make a difference by living and acting on our values. It’s the right thing to do for our employees, our customers, and our communities.