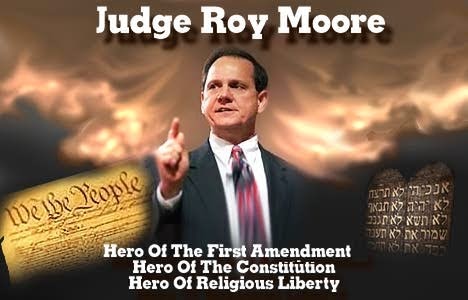 Alabama Supreme Court Chief Justice Roy Moore spoke yesterday at a hate rally meant to whip up those opposed to equal rights for the LGBT community.

During his speech, Moore showed a flair for the melodramatic:

“William Barret Travis from Conecuh County, Alabama, came to draw a line in the sand at the Alamo. He took a stand in the face of an enemy that was far more numerous, but he knew that he had to make a statement for the people of Texas and that he would give his life.

“I hope I don’t give my life, but I’m going to tell you this is a very serious matter. There’s today another threat not only in Texas and Alabama, but across our country where state and federal court judges have overruled constitutional amendments passed by the people of those states, and people have just sat by and watched it out of fear of the federal government.

What Moore gets wrong here is that the amendments to keep loving gay and lesbian couples from marrying are unconstitutional.

When you couple that with the 14th Amendment’s Equal Protection clause it’s clear the state’s that passed marriage equality bans years ago did so out of fear and animus, not “constitutionality.”

I’m all for Roy Moore’s right to be dramatic. Let him get onstage somewhere if that’s his thing. But working against the rights of others is a second rate act that is getting less and less approval on the national stage.