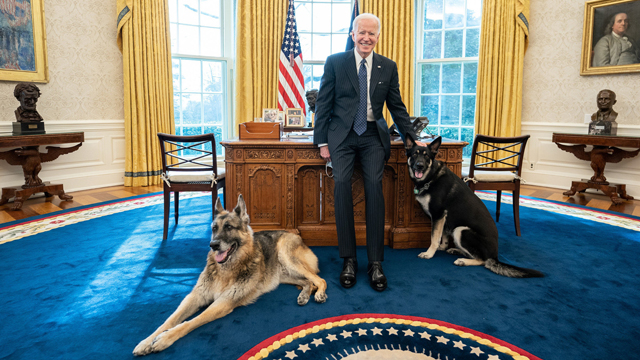 • White House: It looks like Champ and Major Biden (above) have Oval Office walk-in privileges. Great to see dogs in the White House again 🙂

• BBC: Olympic champion figure skater Eric Radford tells BBC Sport that he felt as though “someone had taken invisible bricks off his shoulders” when he came out and that becoming the first openly gay male Winter Olympics champion in 2018 made him “explode with pride.”

• Edge Media: Transportation Secretary Pete Buttigieg shares his thoughts on being a member of both the LGBTQ and faith communities, and essentially how the divide between the two can be bridged.

• Gay City News: Check out this report on Black/queer-owned businesses, the obstacles they might face – plus 12 brands you can support right now.

• Raw Story: It appears the notorious ‘eye-gouger’ who allegedly beat a Capitol Police officer with a pipe at the violent invasion of the U. S. Capitol building is a former NYPD cop.