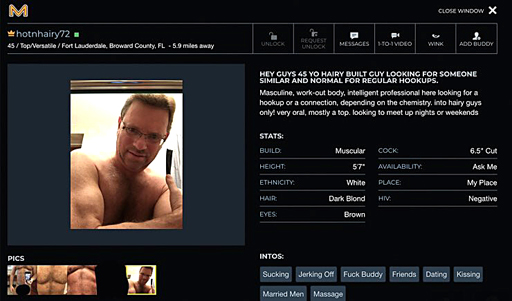 A notorious “ex-gay” therapist who takes money from unsuspecting patients promising to ‘cure’ them of being gay while secretly trolling for sex with men on dating apps has been outed.

From Truth Wins Out:

Norman Goldwasser, by day, is an Orthodox Jewish therapist at Horizon Psychological Services who compares homosexuality to Obsessive Compulsive Disorder and misleads clients by claiming that their sexual orientation can be changed with his special brand of quack therapy, which is rejected by every respected medical and mental health association.

By night, an undercover investigation by Truth Wins Out has found, he solicits sexual partners on Manhunt, a gay dating App, using the profile “Hotnhairy72.”

During our operation, Goldwasser, going by the pseudonym “Dave”, offered to meet for sex with our operative, “Brandon,” at a Fort Lauderdale motel room. Goldwasser also had a profile on Bear Nation by the same name.

Clearly, the hypocrisy is stunning.

Studies have shown that so-called “ex-gay therapy” can lead to depression, anxiety, drug use, homelessness, and suicide.

Also known as “reparative” or “conversion therapy,” the practice has been debunked and denounced by nearly every major medical organization including the American Medical Association, the American Psychiatric Association, and the American Academy of Pediatrics.

In reporting the story for Truth Wins Out, Executive Director Wayne Besen writes that Goldwasser’s “double life of unconscionable lies highlights the rank hypocrisy and predatory nature of the fraudulent ‘ex-gay’ industry.”

Besen, the author of Anything Bust Straight: Unmasking the Scandals and Lies Behind the Ex-Gay Myth, says his organization doesn’t condone outing others unless “there is overwhelming hypocrisy, exchange of commerce, and the threat of harm to LGBT youth.”

Goldwasser has long ties to the “conversion therapy” community going back to Jews Offering New Alternatives to Homosexuality (JONAH), an “ex-gay therapy” organization which was ordered dissolved by a New Jersey Superior Court in 2015 for violating consumer fraud laws.

Besen told JoeMyGod that he had been communicating with Goldwasser in advance of the Truth Wins Out article, and Goldwasser apparently begged Besen to consider his children and grandchildren in regard to exposing him.

Besen shared a text message from Goldwasser which read, in part, “If you want to prove a point, then please do so without destroying my ability to support my family.” 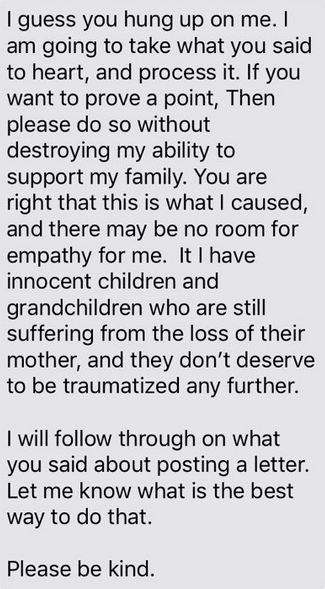 “I reminded Goldwasser that he was asking for sympathy he never afforded his victims, some teenagers, as he coldly collected their money and ruined their lives,” Besen told JoeMyGod.

“I also told him that only caring about his own predicament without apologizing for the harm he caused other people was narcissistic — something he could, unlike homosexuality — fix by visiting a real therapist.”

This scandal comes to light as the new film Boy Erased opens in theaters this week.

The movie, starring Lucas Hedges, Nicole Kidman, and Russell Crowe, focuses on the true-life experience of Gerrard Connelly whose parents sent him to “ex-gay camp” when they discovered his sexuality when he was a teen.