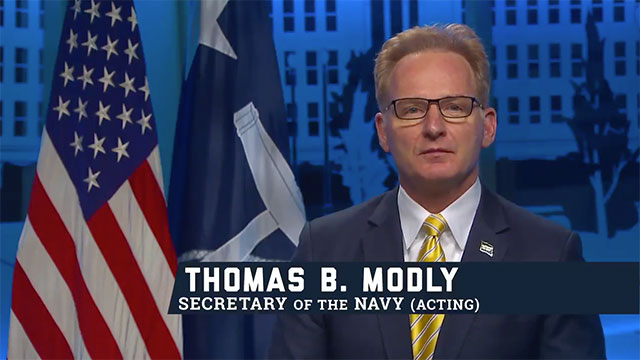 Captain Brett Crozier was removed as commander of the USS Theodore Roosevelt last week for attempting to alert the Navy about mounting concerns about the spread of COVid-19 on his ship. Apparently, the Trump administration thought it “looked bad” for Navy captains going public with unsafe situations.

“We are not at war. Sailors do not need to die. If we do not act now, we are failing to properly take care of our most trusted asset: our Sailors,” Crozier wrote in a memo that three US defense officials confirmed to CNN. Video footage of Crozier being cheered by his crew as he left the Roosevelt went viral.

Acting Navy Secretary Thomas Modly (above) then traveled to Guam where the ship was docked on Monday to address the crew. During his speech, he called Crozier “too naive or too stupid” to be in charge. Hours later, he was ordered by Defense Secretary Mark Esper to apologize.

It would seem that wasn’t enough to stop the bad press, as Modly has now submitted his resignation for the dumb AF remarks.

Acting Navy Secretary Thomas Modly resigned on Tuesday, a day after leaked audio revealed he called the ousted commander of the USS Theodore Roosevelt “stupid” in an address to the ship’s crew, according to a US official and a former senior military official.

On Monday, Modly told the crew of the Roosevelt that their former commander, Capt. Brett Crozier, was either “too naive or too stupid” to be in command or that he intentionally leaked a memo to the media, in which Crozier warned about coronavirus spreading aboard the aircraft carrier and urged action to save his sailors, according to remarks obtained by CNN.

According to Peter Baker of the NY Times, “After excoriating Crozier, Modly did not tour the ship, saw few of the crew and was gone in less than 30 minutes. Questions solicited for him were screened but he did not answer a single one.”

As of today, 230 sailors aboard the Roosevelt have tested positive for coronavirus.

Undersecretary of the Army James McPherson, a retired rear admiral and former judge advocate general of the Navy, has been named as Modly’s successor.