While attending the 23rd Annual GLAAD Media Awards, celebrities and supporters stopped by the Ketel One Vodka “Walk of Change” to make their mark and for every handprint left, Ketel One donated $1000 to GLAAD.

Just a few notes from the evening:

• Dancing with the Stars alumnus,Chaz Bono, attended the GLAAD Media Awards to graciously accept the Stephen F. Kolzak award. Surprise guest, Cher arrived right before the award and was beaming with pride as she presented her son with the notable honor.

• Always popular, Betty White was greeted with a roaring applause from the event’s audience. The Hot in Cleveland star, who arrived fashionably late, dined with her cast members, Wendy Malik and Jane Leeves, and toasted to their GLAAD Media Award.

• Hunger Games star, Josh Hutcherson, accepted the Van Guard Award at the Los Angeles GLAAD Media Awards. The young actor, who was greeted with a bear hug from Benecio Del Toro, came to support the LGBT community and noted that the cause was close to his heart.

• Glee stars Max Adler and Grant Gustin showed there support for the LGBT community and gave back to GLAAD leaving their handprints in the Ketel One Walk of Change.

• Not surprisingly dressed in their best, The Real Housewives of Beverly Hills, Kyle Richards and Lisa Vanderpump, arrived in full-length gowns to strut their stuff on the red carpet. To many attendees’ disappointment, Jiggy was not in attendance.

Check out the pics below, plus more here.

For those who missed it, last week’s controversial mid-season finale episode of “Glee” may have shocked fans, but one LGBT youth advocacy group has seen a number of benefits as a result.

As Entertainment Weekly is reporting, The Trevor Project saw their web traffic spike and their phone calls triple after the episode, which depicted former bully Dave Karofsky (beautifully played by Max Adler) attempting suicide — to the tune of Young the Giant’s “Cough Syrup” — after being outed as gay to his classmates.

“What was great about the show is that they worked in conjunction with us so we knew in advance that there was going to in all likelihood be an increase in volume,” Trevor Project co-founder Peggy Rajski tells EW. “What happened was the volume went up about 300 percent, but we were ready.”

In high school, I weighed a lot of what raced through Dave Karofsky’s mind in this episode.  All those moments compacted in the quick video above that led to his suicide attempt happened to me at some point.  But lucky for me, I kept moving forward.

The phrase “it gets better” has, thankfully, entered our daily lexicon.  But it’s not a cliche, it’s the truth.  I want to encourage everyone to think about the power of our words, because you never know when you may be teasing the next Dave Karofsky. 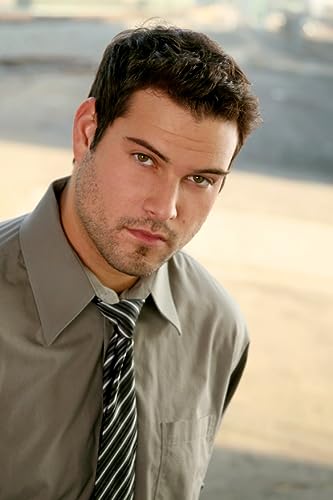 Because he was fabulous this week on GLEE.
Great work on a very important subject.
And because he’s hot  🙂

Great little clip covering the making of this week’s powerful episode of GLEE.

Love the Max Adler segment talking about his role in the episode. 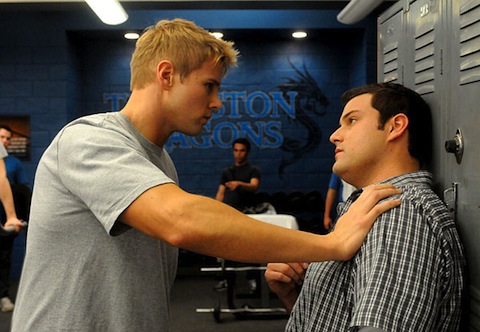 But last night’s winter finale, “On My Way,” proved to be even more surprising. Spurred on by his own homophobic high school bullies both in school and online, Karofsky attempted suicide but was unsuccessful. Max Adler says he applauds Glee‘s producers for tackling such a timely subject: ” As an actor to portray this role on a show like this has been the most amazing opportunity that I could have asked for,” says Adler. “I was incredibly happy that they were brave enough and honest enough to go there because I think it’s a very prevalent issue now in the world.”

Here’s an excerpt of Max’s newest interview with Entertainment Weekly:

ENTERTAINMENT WEEKLY: When did you find out about the suicide attempt?
MAX ADLER: It’s always [in] the script. The kiss. The prom. The suicide. I just get the scripts and am delighted to get that script. I remember last year there were a bunch of interviews I’ve done where I said I could see this ending that way, like as a negative result. But I didn’t think they would go there. I think because the fact that it’s so prevalent in the news and it’s such an epidemic, it needs to be shown and it needs to be talked about. I think all our hopes is that it saves a lot of lives and, to the bullies, I think it sheds a whole new perspective on what their words really do to people.

Was there any concern that the twist was too dark? Or too heavy for Glee?
My thought was this: the show is about high school kids. At that time of your life, there are no decisions that have been made for you. You have so much optimism and hope and you do anything you want. Along the lines of the comedy/tragedy map, you also need to also, to gain perspective, show the struggles and the fears and the anxieties of people in high school. I feel like if you ignore one side and show the other, it’s not as rich and powerful of an experience. If everyone can see both sides, there’s an amazing window of perspective that opens up and you can appreciate one now that you see the other. I thought it was necessary to go here to contrast with what is normally seen on the show. At the end, there is a message of hope.

The scenes leading up to the suicide attempt were so intense and emotional. That must have been tough to film?
Yeah, incredibly tough. I’ve talked to so many people via charities, via Facebook, via twitter. I didn’t have Facebook when I was in high school. Bullying then was more of a hand-to-hand combat. You had to do it face to face and you saw the reaction and you could see the emotion. Now it’s become more of like a verbal sniper. There are people that can fire at you from all angles on tumblr, Facebook, Twitter and there’s no way to stop it. And you get deeper and deeper into this whole and it’s incredibly scary. For me, to experience that and walk a mile in someone’s shoes, it was incredible and it was an amazing learning experience. Was it easy? No. But valuable? Yes.

It’s amazing to think about Karofsky’s 180. You at first appeared to be a standard bully and now he’s this rich, shaded character.
When I was first cast it was just two lines and throwing that slushy onto Finn and that’s what I signed on for. Now to be in over 20 episodes and three seasons has been incredible. You’re right, it’s a 180 but you have to understand why and what motivates that. For Karofsky, back at McKinley he expressed himself by fitting into this mold and not being himself and bullying was his outlet. When that didn’t work, he turned to the sensitive, softer Gorilla-gram method. That didn’t work. That’s when the desperation sets in.

My dad always said to me that suicide is a permanent solution to a temporary problem. That always stuck with me. I feel like that what it is. You can have a few bad days but you gotta understand that there’s a whole future and a whole world out there that do accept you for who you are. That’s why we do what we do on the show is to make everyone realize that being who you are is one of the most beautiful things that you can do.

Do you think Karofsky is legitimately in love with Kurt? Or in love with the life Kurt leads?
Exactly. To me it’s never been lustful or sexual. It’s always been that connection of really admiring Kurt for being the only person Karofsky sees that’s truly himself. I think that’s so rare and for Karofsky to see that there’s just an incredible amount of respect and admiration. Kurt is like this beacon of hope and how it could be for Karofsky. It’s not so much he wants him in a romantic way. It’s always just a different need to have a genuine human connection with someone. That eventually is what can make Karofsky happy in the future, finding someone who will love him for everything that he is. 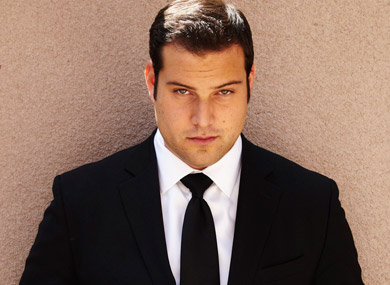 As part of the effort, Adler visited the school Tuesday, where he encouraged students to get involved in the arts, be it literature, acting, dance, photography or more as an alternative to bullying their classmates.

“If kids understand from an early age that everyone in this world is equal, the thought of bullying others will not even enter their headspace,” he said. “The arts, whether it’s music, acting, dance, playwriting or photography, helps kids realize that we all want the same things: love, laughter, great memories with family and friends and to be given a chance to succeed,” Adler added.

Said City Hearts founder and executive director Sherry Jason: “[Adler] may play a bully on TV but in reality, he cares deeply about preventing bullying.”