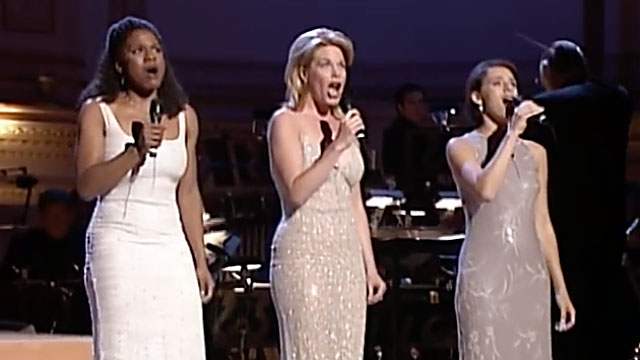 I’m been meaning to post this for a Throwback Thursday post for months, but the Thursdays roll by and…well, I used to be blond.

In any case, many times I get to the end of the day and I don’t want to pay attention to an hour-long story on TV.

So, I fire up the YouTube app on my Apple TV and chill watching videos I’ve ‘favorited’ in the past.

This performance is easily one of my ‘go-to’ videos.

Recorded live at the My Favorite Broadway: The Leading Ladies concert on September 28, 1998, at Carnegie Hall, this trio of world-class Broadway actresses come together beautifully in a mashup of three Andrew Lloyd Webber love songs.

Go ahead and hit play first, then I’ll share a few things.

Now, I wanted to explain why this lands with me so well.

First, what I hear: all three singers have terrific musicianship.

Sometimes you’ll hear singers be a bit lazy and hold a note too long. The problem can be the note they hold might clash with the chord structure of the next phrase.

Second, notice how all three actresses stay focused on the stories they’re telling.

Look at their eyes – even when not singing, they never leave the narrative they’re in. Even when they all move downstage at the 5:52 mark, they don’t glance at the other two singers. They are IN it.

And finally, huge props to the arranger (I believe it was David Loud?) who wove these songs into such a gorgeous tapestry. Bonus points for making sure the ladies’ lyrics for backup phrases all still make sense in each of their stories. No one ever sings a word that doesn’t logically fit into their ‘scene.’ 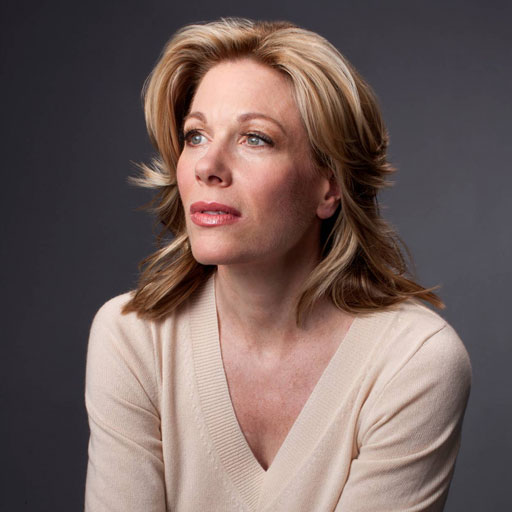 Broadway actress Marin Mazzie has passed away at the age of 57.

Most of what I do here on The Randy Report lately is ‘report.’

But right now, I feel I have to write about this great, inspiring artist. Artist with a capital ‘A.’

Not only about what she did, but how she and her talented affected us.

How she affected me.

“I always wanted to move to New York and be on Broadway even before I had really been here,” Mazzie once said. “I didn’t know what either of those things meant, but that’s what I wanted.”

The first time I read that, I felt a connection, a kindred spirit.

While I wouldn’t achieve Mazzie’s dazzling heights, I grew up knowing I needed to be (and one day would be) living in New York City working on a Broadway stage.

When she shared the news of her cancer diagnosis in 2015, again I felt a connection thanks to my own cancer journey in 2009.

Growing up in Illinois, she listened to every Broadway cast recording she could get her hands on.

“I just glommed onto the cast albums,” Mazzie said in a 1998 interview with the Associated Press. “I would play the records in my bedroom and act out all the characters.”

Yes, me too. I discovered, imagined and explored that ‘never-neverland’  of Broadway in my own childhood bedroom.

After early career Broadway replacement gigs (Big River, Into The Woods), Mazzie’s big break came when she was cast as “Clara” in Stephen Sondheim’s Passion. Her performance won her acclaim and the first of three Tony Award nominations.

Throughout her career, critics rightfully fell over themselves in praise of her power and sensitivity.

Of her star turn as “Guenevere” in Camelot, The New York Times called her “luminous.”

And regarding her Tony and Drama Desk nominated performance in the Broadway revival of Kiss Me, Kate:

“Her outlandishly entertaining take on that great exercise in animosity, ‘I Hate Men,’ which here includes a vivid simulation of giving birth, goes over the top, for sure. But it doesn’t go out of control. And when Ms. Mazzie needs to switch to a lyric sincerity, for ‘So in Love’ and ‘I Am Ashamed That Women Are So Simple,’ her soprano shimmers like polished silver.” – The New York Times

Without an ounce of hyperbole I can write that Mazzie’s performance in the 1997 Broadway musical Ragtime (another Tony nomination) was one of the most electric I’ve witnessed in a Broadway theater.

I’d be remiss if I didn’t share her powerful 11 o’clock number from the show, “Back To Before.”

I remember holding my breath for most of the song when I saw this live at the Ford Theater on Broadway.

In May 2015, Ms. Mazzie was in an “Encores!” presentation of the musical “Zorba!” at New York City Center. The day it opened was the day she received her cancer diagnosis. She went on anyway.

“How ironic that I was singing: ‘Life is what you do while you’re waiting to die. Life is how time goes by,’ ” she told The Times that year, quoting a lyric from the show.

As a young actress, Mazzie was cast in a regional production of Sondheim’s Merrily We Roll Along, directed by the great James Lapine.

“That was a big, big break for me in my career,” she told BroadwayWorld.com. “Being taught to sing ‘Not a Day Goes By’ by Stephen Sondheim himself? That’s something I will never forget.”

In 2016, she revisited the song to devastating effect in concert honoring Stephen Sondheim.

Yes, she had, indeed, learned to sing this song.

In 2016, after her cancer diagnosis, Mazzie stopped the show at the Nothing Like A Dame event with “And The World Goes ‘Round” from the off-Broadway show of the same name.

They say life informs art. It’s abundantly clear life had informed Mazzie of her own deeper connection to these lyrics.

Mazzie is survived by her loving husband, Jason Danieley.