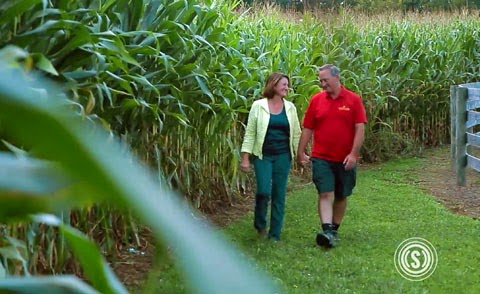 The anti-gay Heritage Foundation is helping these “for-profit” business owners try to portray their violation of the New York State Accommodations Act as a threat to their “religious liberties.”

If you watch the video, note the carefully crafted language(clearly coached by their lawyer) that gets a bit slippery: Cynthia Gifford repeatedly refers to the property in question as “the farm” or “our home.” The Gifford’s farm is the site of their business, not just their place of abode.

By referring to the property where the business is located their “farm,” the owners of Liberty Ridge Farm make themselves and the property very “homey” and all that.  Very nice.  But it is a business; a business which obtained a business license from the state of New York and therefore must follow the laws of the state.

Don’t operate a wedding venue if folks who can legally marry – like gay people – can’t get married there. Businesses can’t get to choose which customers they want to accomodate.

The New York State laws regarding public accommodation are clear, and you can’t run a wedding venue and decide which legal weddings you do or don’t want to based on sexual orientation of the customers. It’s against the law. Period.

And by the way, while some may argue over whether sexual orientation is or isn’t a “chosen” trait, choice of religion IS chosen. For some folks, they may change from one religion to another to suit a marriage arrangement or some other situation. Choice (of freedom from) religion is a choice. Many experts would tell you that sexual orientation is not. As a gay man myself, I am confident I did not “choose” to be straight or gay. I simply am gay.

One last thing: the lawyer and Cynthia Gifford, in another use of slippery language, seem to insinuate that recording the initial conversation between one of the women looking to book the venue with Ms. Gifford was somehow illegal or nefarious. The laws of New York state make it a crime to record to record a telephone conversation unless one party to the conversation consents (N.Y. Penal Law §§ 250.00, 250.05.)  The person recording the call WAS consenting by making the recording.

Eleven states have laws that require “two-party consent” – but New York state is not one of them.

Watch the video below. It’s very warm and fuzzy, and you may feel for the woman. But they broke the law of New York state. Whether or not she is likable, or you are Christian, doesn’t play into the fact that the law was broken.