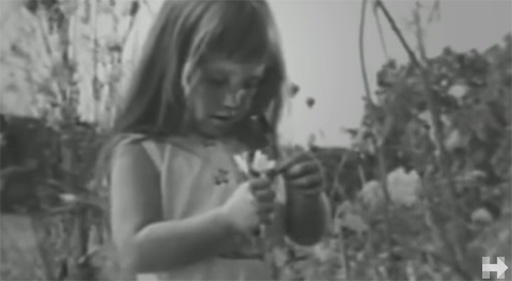 Monique Corzilius Luiz, who appeared in the infamous LBJ “Daisy” nuclear campaign ad 52 years ago, is back in a new Hillary Clinton spot highlighting Donald Trump’s tempestuous temperament and the dangers of a Trump presidency.

Hillary Clinton opened the last full week of campaigning Monday with a television advertisement revisiting the famous 1964 “Daisy” ad about nuclear weapons, an attempt to shift the presidential election back to a comparison with Donald Trump after a renewed FBI inquiry roiled her campaign.

The new ad features the same woman who, as a small girl, plucked petals from a flower in the original one, which was aimed at Republican presidential nominee Barry Goldwater. The new one returns to a frequent Clinton theme this year – the claim that Trump is reckless and unfit to be commander in chief. The national security comparison has been one of Clinton’s strongest advantages over the Republican businessman in an election she remains favored to win.