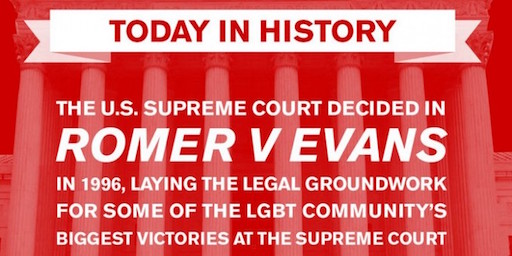 The infamous Amendment 2 prohibited the state and its political subdivisions from providing lesbians, gay men and bisexuals any legal protection against discrimination on the basis of sexual orientation. It was a reaction to the efforts by several Colorado municipalities to enact anti-discrimination ordinances to protect their LGB residents.

When decided, Romer v. Evans was the single most positive Supreme Court ruling in the history of the gay rights movement. The Court’s ruling made clear that lesbians, gay men and bisexuals have the same right to seek government protection against discrimination in the United States as any other group of people.

The decision also marked a new level of legal respect for LGBT people and rejected the notion that it is legitimate for the government to discriminate against gay people based on moral objections to homosexuality. It is a precedent whose influence can be traced through every momentous subsequent decision, and it informs our work today as we fight back against continuing efforts to enshrine discrimination. Indeed, faithful application of the controlling principles enunciated in Romer requires that the preemption provisions contained in North Carolina’s HB2 likewise be found unconstitutional.

Today, as we look at the challenges in front of us, we reflect on the 20 years of precedent at our back and take comfort. We’ve been here before, we handled it then, and we’re committed to continuing to protect LGBT people, now and in the future. 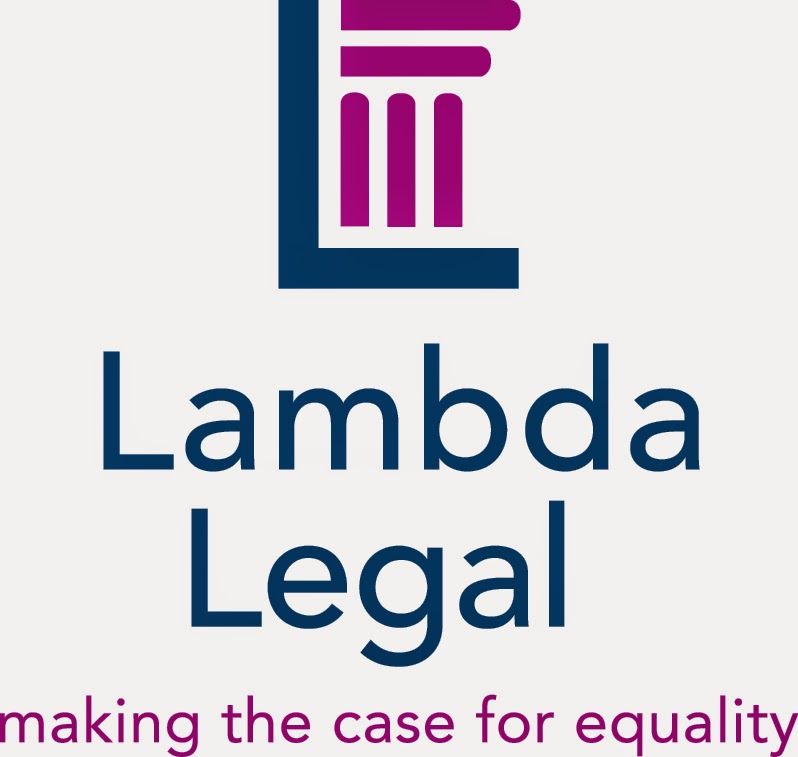 LGBT advocates and legal experts seem cautiously optimistic that SCOTUS will rule in favor of marriage equality this June.

BUT – folks want to know, what if they don’t?

Jon Davidson, legal director for Lambda Legal, spells it out via email:

“If the Supreme Court were to rule in the cases in which it today granted review that the U.S. Constitution does not protect same-sex couples’ right to marry and does not require states to respect marriages same-sex couples lawfully have entered in other jurisdictions, a number of issues would arise.

“With respect to same-sex couples who already have married as a result of court rulings, Lambda Legal strongly believes — as a federal district court in Michigan ruled just yesterday with respect to marriages entered in that state before the 6th Circuit’s adverse ruling — that those marriages will remain valid and will need to continue to be respected by the states in which those marriages were entered. Nonetheless, the validity of those couples’ marriages may be challenged and those couples may want to take additional steps (such as executing wills, durable health care powers of attorney, and securing second parent adoptions) to provide them and their families extra peace of mind and security.

“With respect to whether same-sex couples would be able to marry and would have their marriages respected in other states, that would vary from state to state. States in which marriage equality was achieved by a ruling under the state’s constitution, by legislative reform, or at the ballot box, would be unaffected. Unmarried same-sex couples in Kentucky, Michigan, Ohio, and Tennessee (the states whose marriage laws the Supreme Court today agreed to review) would be forced to seek reform through the political process. States in which a final judgment has been obtained in federal court would be required to continue to allow same-sex couples to marry and to respect out-of-state marriages entered by same-sex couples unless and until someone with standing makes a motion to reopen the judgment and that motion is granted (unless stays are properly obtained before then). In some states, there may be no one with standing interested in seeking to set aside the existing judgment. Same-sex couples in states in which a judgment is on appeal or can still be appealed whose judgments have not been stayed should be able to continue to marry and to have their out-of-state marriages honored by the state until the existing judgment is stayed or reversed.

“There’s no question that it would be a mess. This is one additional reason why the Supreme Court should reverse the 6th Circuit’s aberrant decision and hold that same-sex couples, like all other couples, share the fundamental right to marry and that it violates federal guarantees of equality and liberty to refuse to allow them to marry or to deny recognition to the marriages they lawfully have entered in other states.” 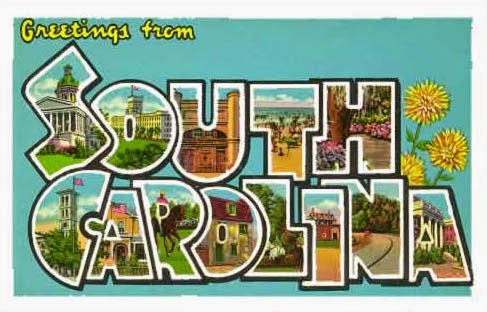 The domino effect of the US Supreme Court’s decision to NOT review any of the same-sex marriage rulings from appellate courts has become apparent as states under the jurisdiction of those courts now are bound by the Circuit Court rulings.

That includes South Carolina, who is covered under the jurisdiction of the 4th Circuit Court of Appeals who held that Virginia’s same-sex marriage ban was unconstitutional.

However, South Carolina Governor Haley and Attorney General Wilson continue to apply the marriage ban as if nothing had happened.

“The Fourth Circuit’s decision means that same-sex couples in South Carolina should be shopping for a caterer, not a lawyer. Governor Haley and Attorney General Wilson cannot continue to ignore the rule of law. Fortunately, they have run out of cards to play – we’re urging the court to allow same-sex couples in South Carolina to marry without any further delay,” said Beth Littrell, Senior Attorney in Lambda Legal’s Southern Regional Office based in Atlanta. “The state doesn’t have any credible arguments for a court in South Carolina to entertain.”

“The Governor and Attorney General are playing politics with our families and it’s shameful,” said South Carolina Equality lawyer Nekki Shutt, partner at Callison Tighe & Robinson. “Instead of celebrating and planning weddings, same-sex couples all over South Carolina are holding their collective breath – and they have been waiting long enough.”

Founded in 1973, Lambda Legal is the oldest and largest national legal organization whose mission is to achieve full recognition of the civil rights of lesbians, gay men, bisexuals, transgender people and those with HIV through impact litigation, education and public policy work.

As a nonprofit organization, Lambda Legal does not charge plaintiffs for legal representation or advocacy, and they receive no government funding. The organization depends on contributions from supporters around the country.