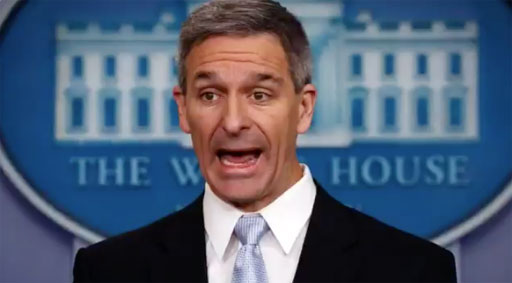 Ken Cuccinelli, acting director of U.S. Citizenship and Immigration Services (and descendant of Irish/Italian immigrants) says the immigrant tradition that has made America great for centuries should be revised to welcome into the U.S. only those who can “stand on their own two feet.”

Ken Cuccinelli tweaked the famous poem from Emma Lazarus — whose words, “Give me your tired, your poor, your huddled masses yearning to breathe free” are long associated with immigration to the US and the nation’s history as a haven — as part of a case for strict new measures pushed Monday by the Trump administration that could dramatically change the legal immigration system.

“Would you also agree that Emma Lazarus’s words etched on the Statue of Liberty, ‘Give me your tired, give me your poor,’ are also a part of the American ethos?” NPR’s Rachel Martin asked Cuccinelli on “Morning Edition” in an interview published Tuesday.

“They certainly are: ‘Give me your tired and your poor who can stand on their own two feet and who will not become a public charge,'” he replied. “That plaque was put on the Statue of Liberty at almost the same time as the first public charge was passed — very interesting timing.”

On Monday, the Trump administration announced a regulation that makes it easier to reject green card and visa applications. The new rule means many green card and visa applicants could be turned down if they have low incomes or little education, and have used benefits such as most forms of Medicaid, food stamps, and housing vouchers, because they’d be deemed more likely to need government assistance in the future.

Here’s acting USCIS director Ken Cuccinelli saying on NPR this morning that the Statue of Liberty plaque should be changed to read, “give me your tired and your poor who can stand on their own two feet, and who will not become a public charge.” pic.twitter.com/q8OoNn3k6r 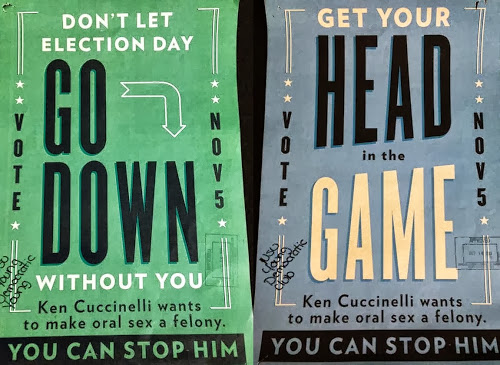 The Washington Post is reporting on some racy campaign posters that have made their way onto college campuses incorporating GOP candidate Ken Cuccinelli’s support for outlawing oral sex:

Both posters say at the bottom that they were paid for by “Education Votes, a project of the Democratic Party of Virginia.” They were distributed to other campuses around the state, too, but DPV spokesman Brian Coy said the party has had a change of heart. “While we feel Virginians deserve to know the truth about Ken Cuccinelli’s extreme social agenda, we apologize to those who were offended,” Coy said. “We’re working to remove these posters from the campuses in question and they will not be used again.” 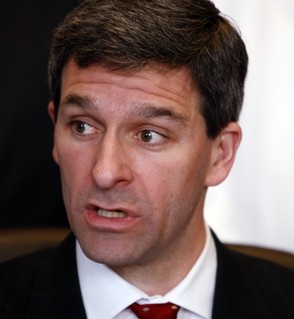 Attorney General Ken Cuccinelli, currently running behind in polls in his quest to become governor, sought to have the law reinstated.

The ladies of the THE VIEW were outraged – and rightfully so – over GOP Virginia gubernatorial candidate Ken Cuccinelli’s plan to bring back anti-sodomy laws to his state.

Barbra Walters notes that Cuccinelli seems to equate oral sex with homosexuality which cues Sherri Shepard to admit this makes her “gay as a two dollar bill.”

It’s a fun exchange. Were Elizabeth Hasselbeck still on the panel, it’s easy to picture her stiff and silent. Thank goodness that’s over. Much more fun now 🙂 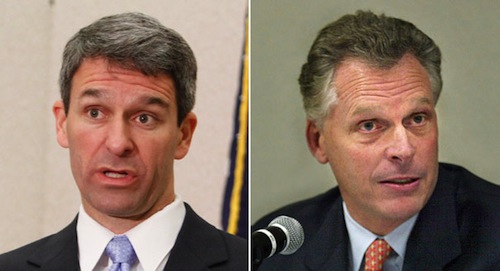 In their first gubernatorial debate in Virginia, Democratic nominee Terry McAuliffe didn’t shy away from calling GOP nominee Ken Cuccinelli out on his many anti-gay statements.

McAuliffe repeatedly attacked Cuccinelli throughout the Virginia Bar Association debate in Hot Springs, VA for his record of demonizing science, women’s health, and LGBT people. Twice, McAuliffe noted that Cuccinelli had called LGBT Virginians “soulless” and “self-destructive” and that his attempts to rescind non-discrimination protections have hurt Virginia’s business climate.

Cuccinelli consistently ignored the attacks until moderator Judy Woodruff asked him directly about his previous comments. Cuccinelli responded briefly, saying, “My personal beliefs about the personal challenges of homosexuality haven’t changed.” He then said that as governor he he would “create an environment” economically every Virginian has opportunity.

In contrast, McAuliffe reaffirmed his support for marriage equality, promised to sign an executive order banning discrimination in employment, and said while Virginia’s constitutional ban and Republican legislature make it unlikely, he would sign a marriage equality law if it came to his desk.