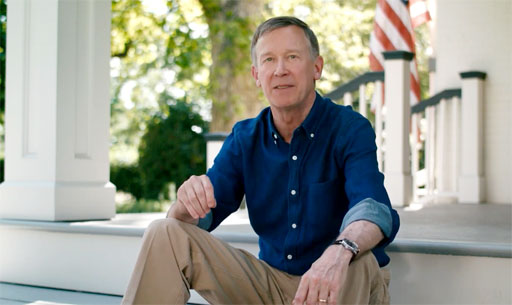 The New York Times reports former Colorado Governor John Hickenlooper announced on Thursday that he is ending his presidential campaign.

A moderate political voice in the Democratic party, his policies and approach never took off in a field of candidates vying to be the “most progressive.”

Mr. Hickenlooper has been seriously considering a run for the Republican-held Senate seat in Colorado that is up for election in 2020 — a key pickup target in the Democrats’ strategy to try to retake control of the Senate.

“Today, I’m ending my campaign for president,” he said in a videotaped statement. “But I will never stop believing that America can only move forward when we work together.”

“I’ve heard from so many Coloradans who want me to run for the United States Senate,” he added. “They remind me how much is at stake for our country. And our state. I intend to give that some serious thought.”

Truth be told, I think he would be a formidable senatorial candidate for Colorado. And, with Democrats needing to pick up four Senate seats, he would be far more useful running for Republican Sen. Cory Gardner, who is up for reelection in 2020.

I think the same can be said for former Texas Rep. Beto O’Rourke. The ‘magic’ from the 2018 election cycle has failed to materialize for him in his presidential run.

But support for O’Rourke in his home state is strong. And GOP incumbent John Cornyn would face a tough challenge with O’Rourke as his opponent.

In my humble opinion…