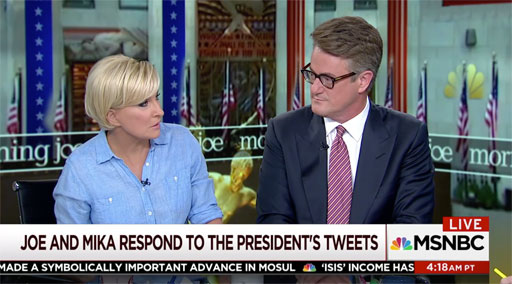 In the aftermath of President Trump’s “bleeding badly from a face lift” tweet about MSNBC Morning Joe co-host Mika Brzezinski, she and fiancé Joe Scarborough both penned an op-ed for the Washington Post and spoke on the air this morning about an alleged offer from the White House.

According to the two MSNBC hosts, if the pair would call and apologize to Donald Trump for their less-than-glowing coverage over the past several months, Trump would call his good buddy who owns the National Enquirer and get a negative story about the hosts “spiked.”

NY Magazine reporter Gabriel Sherman says he has the inside scoop:

According to three sources familiar with the private conversations, what happened was this: After the inauguration, Morning Joe’s coverage of Trump turned sharply negative. “This presidency is fake and failed,” Brzezinski said on March 6, for example. Around this time, Scarborough and Brzezinski found out the Enquirer was preparing a story about their affair. While Scarborough and Brzezinski’s relationship had been gossiped about in media circles for some time, it was not yet public, and the tabloid was going to report that they had left their spouses to be together.

In mid-April, Scarborough texted with Trump son-in-law Jared Kushner about the pending Enquirer story. Kushner told Scarborough that he would need to personally apologize to Trump in exchange for getting Enquirer owner David Pecker to stop the story.

The editor of the National Enquirer denies any knowledge of conversations between the White House and the Morning Joe hosts.

Here’s the two hosts explaining on the air this morning:

Of course, Scarborough and Brzezinski knew exactly what they were doing in order to bait the Donald. He quickly dispatched this tweet upon watching the show this morning.

Watched low rated @Morning_Joe for first time in long time. FAKE NEWS. He called me to stop a National Enquirer article. I said no! Bad show

Yet another lie. I have texts from your top aides and phone records. Also, those records show I haven’t spoken with you in many months. https://t.co/TZWiElo6Gs

Why do you keep lying about things that are so easily disproven? What is wrong with you? https://t.co/aAoUj5HYZS

Legal expert Laurence Tribe chimed in on the alleged “blackmail:”

If WH told @morningmika & @JoeNBC the Nat’l Enquirer wd smear them unless they laid off T on their show, that wd be a crime per 18 USC 872 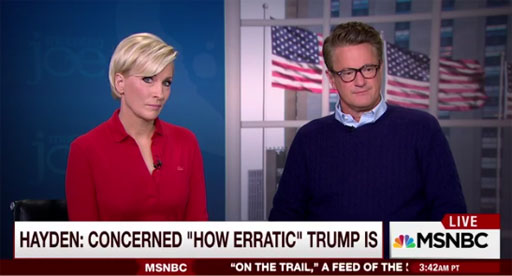 From the video below:

Watch: What are some major concerns about Trump’s handling of national security? Hayden and #morningjoe weigh in. https://t.co/FyFoSmJlJI 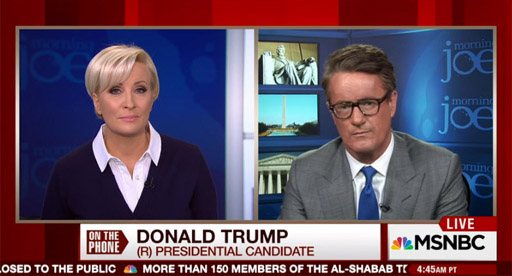 Calling in to MSNBC’s “Morning Joe” today, Donald Trump said that having his supporters raise their hands and pledge their votes to him was in no way reminiscent of the famous “Heil Hitler” salute. In fact, he said he had “just heard” about such ideas and was surprised anyone could think that.

Trump also dodged questions on his “foreign policy” team telling co-host Mika Brzezinski that although she’s asked him three times over the past several weeks, he said he’d would reveal his team when the time was right.

Also on “Morning Joe” today, both Mika and Joe Scarborough seemed very defensive about their frequent interviews with The Donald. I’m guessing the rumors of them being a bit too cozy with the Trumpster have touched a nerve. Mika and Joe both made a big deal defending their Trump segments and saying they would welcome any of the other presidential candidates calling in at any time. 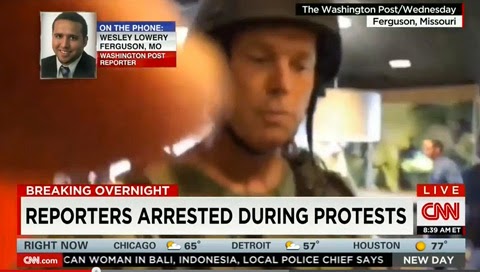 The Washington Post’s Wesley Lowery, who along the Huffington Post’s Ryan Reilly, were arrested in a McDonalds last night, called out MSNBC’s Joe Scarborough after the MSNBC host criticized the journalists and accused them of just wanting to “get on TV:”

“Well, I would invite Joe Scarborough to come down to Ferguson and get out of 30 Rock where he’s sitting and sipping his Starbucks smugly,” Lowery said during a Thursday morning appearance on CNN.

“I invite him to come and talk to the residents of Ferguson, where I’ve been since Monday afternoon having tear gas shot at me, having rubber bullets shot at me … I would invite Joe Scarborough down here to do some reporting on the ground, then maybe we can have an educated conversation about what’s happening here.”

Lowery and Reilly are covering the events on the ground in Ferguson, where tensions continue to rise after Michael Brown, an unarmed black teenager, was shot and killed by a police officer last weekend. 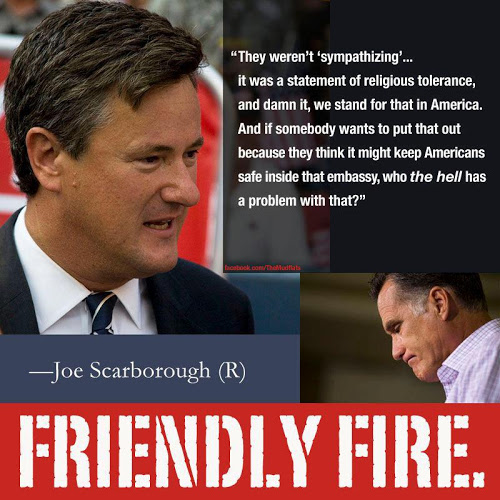