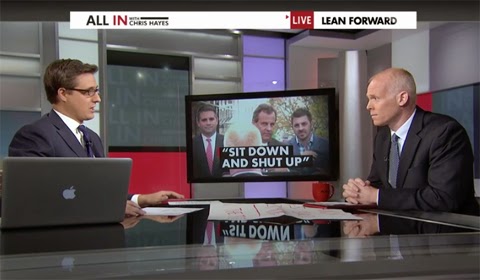 Ready stood up at a two year anniversary event where Gov. Christie was talking about all the progress made since Hurricane Sandy.  Ready, however, wanted to know why the bulk of funds allocated to help NJ folks was still sitting in an account.

“I’m a 6-foot-4, 215-pound former pro-athlete. I’m not going to be bullied by him. And when he goes into his bullying routine, it lays bare the fact that he does not want to talk about the political realities that are being presented to him.”

During their back and forth, Christie told Keady that “somebody like you doesn’t know a damn thing about what you’re talking about except to stand up and show off when the cameras are here. I’ve been here when the cameras aren’t here buddy, and done the work.” Christie went on to tell Keady that “I’m glad you had your day to show off” and now, “turn around, get your 15 minutes of fame, and then maybe take your jacket off, roll up your sleeves and do something for the people of this state.”

But Keady is no stranger to what New Jersey has been through. He grew up in Belmar, now lives in neighboring Spring Lake, and after the storm, he said, he took a month off of work and volunteered “every day” in Belmar. “They trusted me with one of their borrowed dump trucks and I was running clean up crews all over town,” Keady said. “I wanna know how many crawl spaces the governor was in, cleaning up. But he got his photo-op in Belmar.”

Keady talked about how only 20 percent of a $1.1 billion a program to get people back in their homes has actually gone out. “His administration is sitting on $800 million of taxpayer money that was supposed to go to our fellow New Jerseyans,” Keady said.

“If I’d just stood up, sat down, and been polite, you and I wouldn’t be talking right now,” Keady added. “It’s necessary at times to do small and large acts of civil disobedience so people’s voices can be heard. And if Governor Christie doesn’t like that, he’s in the wrong business.”

Mitt Romney sat down with CNN’s Gloria Borger this week to reflect on his failed Presidential campaign and episodes along the way such as the 47% video and Hurricane Sandy which proved to be major factors in the election outcome.

Mitt Romney: “And there were other things that didn’t help my campaign, either. Obviously a hurricane with a week to go before the election stalled our campaign.”

Gloria Borger: “Do you blame Chris Christie as much as some other people..?

Mitt Romney: “No, no, no… No. No, no…I — I wish the hurricane hadn’t have happened…when it did, because it gave the President a chance to be presidential, and to be out showing sympathy for folks. That’s one of the advantages of incumbency. But, you know, you don’t look back and worry about each little thing, and how could that have been different. You look forward.”

He wishes the hurricane didn’t happen when it did?

I personally wish it never happened but maybe that’s me.

Still thinking good thoughts for all the people affected by the tragedy of the storm. 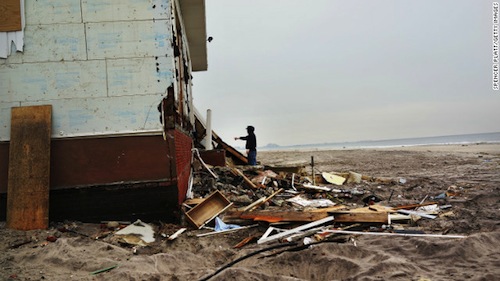 Just in from CNN: Lawmakers in the House of Representatives approved measures Tuesday to send more than $50 billion in aid to the Northeastern states ravaged by Superstorm Sandy last fall, though some conservatives in the House were pushing for spending cuts that would offset the cost of the recovery package.

The final bill passed 241-180, with 49 Republicans voting against it. The package now heads to the Senate.

The House has approved a dramatically scaled back aid package for those affected by Hurricane Sandy.

67 Republicans voted against the bill.

The House plans to vote again later this month on a $51 billion package in relief aid to state governments still rebuilding after the storm.

Gothamist has posted five time-lapse videos showing the impact of Hurricane Sandy on New York City, including the one below taken in Brooklyn Heights as Lower Manhattan goes dark within seconds at the :08 mark.

All videos are here.

Visit NBCNews.com for breaking news, world news, and news about the economy
News panel discusses Romney’s remarks in 2011 about cutting funding for FEMA, as FEMA plays a central role in recovery on the East Coast due to Hurricane Sandy just one week before the election.

Actually, it turns out he was asked 11 times if he would eliminate FEMA or how he would like to see disasters handled…

New Jersey Gov. Chris Christie declared the devastation from Superstorm Sandy in his state to be a “major disaster” and “devastation,” but he also stated that working with President Obama on securing resources for the state has been “great.”

“The president has been all over this, and he deserves great credit,” Christie said. “He gave me his number at the White House and told me to call him if I needed anything, and he absolutely means it. It’s been very good working with the president and his administration. It’s been wonderful.”

Note, however, the response the Governor gives to the Fox team when they ask about Mitt Romney at the 2:10 mark. Not a good moment for Fox. 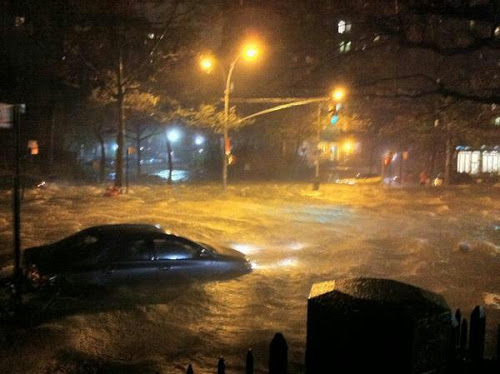 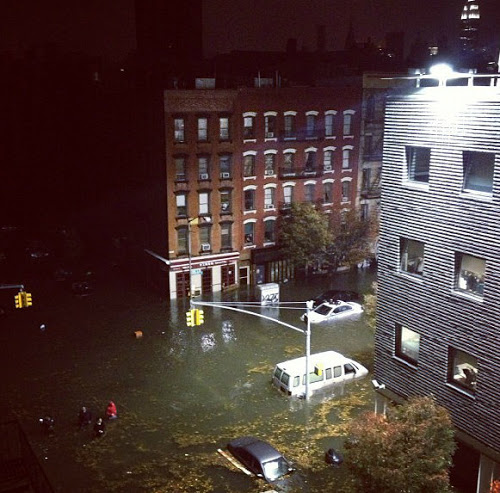 JoeMyGod shares pics from the Lower East Side in New York City, after Hurricane Sandy.