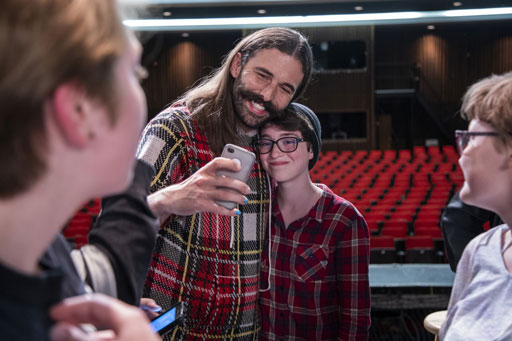 In case you missed it, Netflix dropped Season 4 of the Emmy Award-winning series, Queer Eye.

As part of the new season, the Fab 5 head to the Kansas City high school where cast member Jonathan Van Ness spent his teens to ‘make better’ his favorite teacher.

As a bonus for that episode, the guys sit down for a chat with the school’s Gay/Straight Alliance for a candid conversation on subjects ranging from coming out, burgeoning self-awareness, bullying, and allies.

Van Ness openly shares that during his days at Quincy High School, “”I couldn’t walk in these halls – I got called the F word every ten steps I took.”

“At that time Gay-Straight Alliance was something I didn’t think would be literally allowed,” he added. “As someone who got so bullied and so tormented, you guys are light years ahead of where I thought the movement would be.”

I had a similar experience in high school growing up in Texas. As a gay man today, I’m not impressed by the support these kids get via a GSA, but how they have such confidence to deal with who they are at such a young age.

Karamo Brown asks the kids, “Where did you get the courage to come out?”

With no pause a student chimes in, “You,” pointing at the Fab 5.

“I was having a lot of anxiety and doubt, but then I discovered you guys, but you don’t seem to have much stress at all,” she continued. 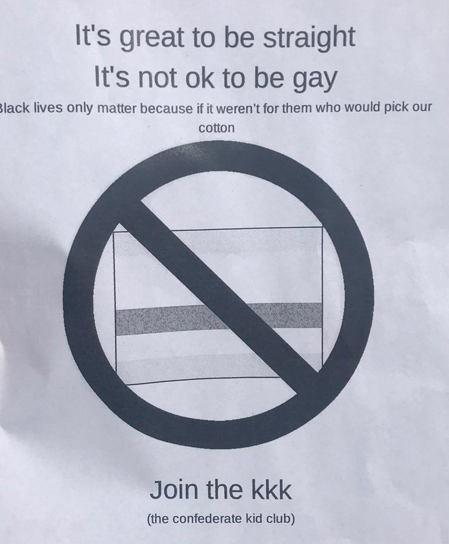 During the last week of March, homophobic and racist flyers began to appear throughout the hallways of McCormick Junior High School in Cheyenne, Wyoming.

According to the Wyoming Tribune Eagle, the flyers read, “It’s great to be straight. It’s not OK to be gay. Black lives matter only because if it weren’t for them who would pick our cotton.”

“Join the kkk,” concluded the message, which seemed to be signed by “the confederate kid club.”

When the flyers were brought to the attention of Kaycee Cook, a substitute teacher and co-sponsor of the school’s gay/straight alliance, she contacted Wyoming Equality. The advocacy group works to protect LGBTQ people in the state.

The executive director for Wyoming Equality, Sara Burlingame, told the press that she had heard about the flyers from several members of the community.

“This is unacceptable,” she said in a statement to Queerty. “It does not reflect the values of Cheyenne. We’re not going tolerate this. And we’re going to show up and support our LGBT youth and our black youth with unwavering pride and support.”

Even the mayor of Cheyenne, Marian Orr, got wind of the flyers and tweeted her support to Cheyenne youth writing, “Tonight, my heart is the heaviest it’s been since taking office. This is not right. To the youth in our community: You are loved. You are valued. We need you to take us forward. You are Cheyenne.”

Tonight, my heart is the heaviest it’s been since taking office. This is not right. To the youth in our community: You are loved. You are valued. We need you to take us forward. You are Cheyenne. https://t.co/NSvk0MRkKv

When the Wyoming Tribune Eagle contacted Principal Jeff Conine about the flyers, he seemed to downplay the issue saying there were only two flyers found and that they were removed before the school day began.

But others, including Kaycee Cook, told the Eagle that the flyers were “all over the school.”

In fact, anti-LGBTQ bullying has been reported for weeks at the school with little done to tamp down the hate.

Some students say they stopped going to the school’s GSA meetings because a group of boys began verbally harassing and bullying the members of the group.

One student who preferred to remain anonymous said the boys openly called themselves racists and homophobes.

There are even reports of teachers calling same-sex students holding hands “disgusting.”

Cook says she’s taken the issue to supervisors for weeks without any results.

Here’s where it really gets messed up, though.

On March 27, Cook received an email from Principal Conine firing her.

“I am notifying you that due to incidents that have occurred at McCormick you are no longer welcome as a guest or a substitute teacher in our building,” read the email.

Cook told the press she believes Conine’s actions were in retaliation for contacting Wyoming Equality.

The Laramie County School District 1 issued a statement about the debacle, which read:

“In the midst of an investigation regarding inappropriate flyers that were posted at McCormick Junior High yesterday, (LCSD1) is offering support to our LGBTQ and black students who were reportedly targeted through the incident.”

When contacted by the Eagle, Principal Conine told reporters he wasn’t prepared to make a statement about the email.

Since last week, at least one of the student’s responsible for the hateful flyers has been identified. LCSD1 Superintendent Boyd Brown told Wyoming News that the student would be “disciplined in line with district policy.”

Additionally, it looks like Cook’s dismissal will be reversed and she should be reinstated at the school soon.