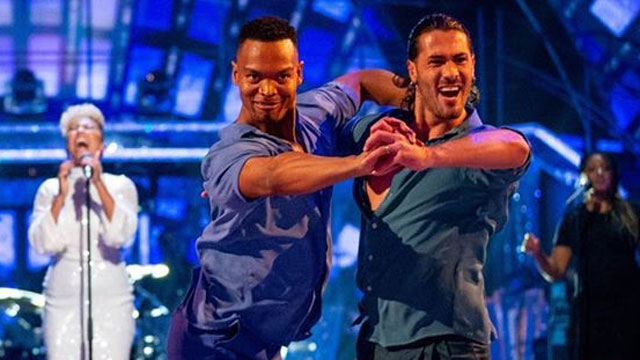 This past weekend the UK TV show Strictly Come Dancing put the spotlight on two male dancers partnering together in a routine.

The reality competition series, a precursor to ABC’s Dancing with the Stars in the U.S., gave professional dancers Johannes Radebe and Graziano di Prima a solo spot during a production number showcasing Emeli Sande singing “Shine.”

Radebe, who was eliminated last week with his celebrity partner Catherine Tyldesley, grew up in South Africa and is openly gay. In an interview with Hello! Magazine, he said, “I’ve never felt so liberated.”

“For the first time, I feel accepted for who I am,” Radebe told the publication. “That says so much about the people of this country.”

“To be able to dance with a friend I respect and adore is joyous,” he continued. “There’s bromance galore between us, but there were no male and female roles, just free movement. It was beautiful, classy and elegant.”

In advance of the performance, the 32-year-old dancer shared with The Sun that a same-sex dance would have never happened when he was dancing on the South African edition of Strictly.

Growing up near Johannesburg, Radebe said he was bullied from an early age and was called names like “sissy boy” frequently. At the age of 17, he was attacked with a baseball bat by a boy at school who called him “f*gg*t.”

That journey to now made Sunday’s performance that much more meaningful for him.

“When I got to the UK it was beautiful – for the first time I felt liberated,” he explained. “It’s just people accepting you for who you are no matter what you do. So now I feel more confident and comfortable because of my surroundings.”

Radebe posted photos of himself and di Prima with the caption, “Love knows no boundaries” with rainbow and heart emojis and tagged di Prima.

Di Prima, who is heterosexual (he proposed to his girlfriend live on stage earlier this year), also celebrated the moment taking to Twitter writing, “REPRESENTATION always matters! Unforgettable moment, dancing with you @johannesradebe @bbcstrictly”

The response on social media to the same-sex pair was mixed ranging from euphoria (including praise from former champ Joe McFadden) to some naysayers:

Same sex professional couple dancing on #Strictly and I feel like my heart is going to burst. YES!!

#Strictly having two male dancers got me like …. pic.twitter.com/TT8MrhReJS

I loved watching it – I’d happily watch a lot more of it. I love dance, full stop, especially when done well – as that was.

I won’t watch if this is the future of the show. I’m sorry

This was absolutely stunning @jojo_radebe @GrazianoDiPrima – I’m appalled at some of the comments… I mean come on people it’s two people dancing together and very well…. can you just not enjoy the artistry? https://t.co/EUoNnGmxcC

Watch the full performance below. Radebe and di Prima enter around the 1:00 mark.