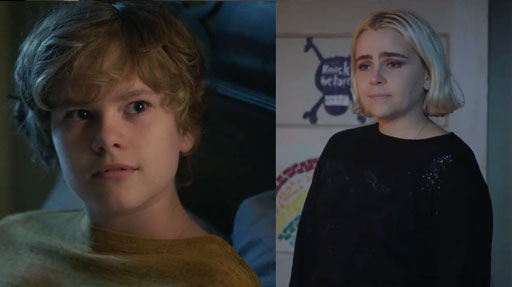 Annie takes in the news in the best way possible. Watch below.

Last season, there were subtle allusions that Sadie was exploring their gender identity.

Isaiah Stannard, who plays Sadie, is an out trans boy and uses he/him pronouns.

Jenna Bans, creator of the show, spoke to Variety last summer about the casting of Isaiah.

“Good Girls” creator Jenna Bans had an eye-opening experience when casting her NBC dramedy. She had originally written Sadie, the tweenage daughter of Mae Whitman’s Annie, as a boy named Ben. When her casting director asked if she’d be interested in seeing a girl for the part of a boy, she was intrigued and hired Izzy Stannard — a young actor who, at the time, seemed to identify with the female gender assigned to him at birth. By the time filming began, Stannard made it clear that he identified as a boy and was using he/him pronouns.

“We realized we had a really great opportunity to tell a story about a character who was gender non-conforming, but at the same time not necessarily have that be what leads the story,” says Bans, who also did her due diligence and consulted GLAAD’s Adams. “What’s most important to the character and the story we’re telling between Sadie and Annie is really about the bond between Sadie and her mom. We liked the idea that the character of Sadie was exploring her gender [expression] in the show, but I think what we responded to more was that the Mae Whitman character just couldn’t care less.”

Oh, BTW, in the midst of all the GoT drama last night, @NBCGoodGirls did a REALLY beautiful #trans coming-out moment. #LGBTQ https://t.co/ZjHZFuDvoG— Rachel A. (@rachelawrites) April 22, 2019