CNN reports that even George Will, longtime conservative commentator and columnist has announced he is leaving the Republican party over the nomination of Donald Trump.

Will indicated four years of Trump with no opposition would be dangerous for the country. His advice to Republicans? Deal with Hillary for four years and come back in 2020.

In a speech at a Federalist Society luncheon Friday, he told the audience, “This is not my party,” according to PJ Media, a conservative news website.

When asked by PJ Media about his message to conservatives regarding Trump, Will responded, “Make sure he loses. Grit their teeth for four years and win the White House.”

In usual Trumpian fashion, The Donald responded via Twitter:

George Will, one of the most overrated political pundits (who lost his way long ago), has left the Republican Party.He’s made many bad calls 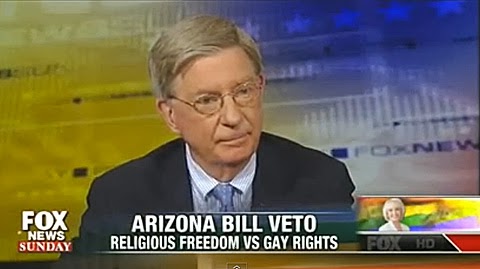 While pointing out that the Civil Rights Act of 1964 said that businesses had to serve everyone equally, Will added:

To be honest, I’m not completely sure what he means by this. On a surface level, it would seem Will thinks “you’re winning the right to marriage equality, don’t push it any further. Stop asking for non-discrimination too.  It’s ‘not neighborly.'”

More and more polls continue to show the “one way trend” of public support for same-sex marriage.  As I’ve written here many times, the younger folks see the inequality of banning marriage equality.

From today’s Politico survey: “A full 63 percent of
18-to-29-year-olds backed marriage…It dropped off to 36 percent support among both
30-to-44-year-olds and 45-to-59-year-olds. Only three in 10 seniors supported gay marriage.”

Asked about such numbers and the Supreme Court’s decision to hear two
cases on marriage equality, journalist George Will broke it down like
this: all the seniors brought up pre-gay rights are kicking the bucket.

“There is something like an emerging consensus,” he said on ABC News’ This Week. “Quite literally, the opposition to gay marriage is dying. It’s old people.”

Speaking the truth, George Will calls out the absurdity of not one GOP politician disavowing Rush Limbaugh’s attack on student Sandra Fluke.

As George Will says “they want to bomb Iran but they are afraid of Rush Limbaugh.”