While Pennsylvania’s hate crime bill may be stalled in committee, the city of Philadelphia has passed it’s own version of the legislation:

City Council unanimously approved a measure on Thursday that would make it a crime to harm someone because of sexual orientation, gender identity, or disabilities.

The proposal was triggered by the Sept. 11 assault on a gay couple in Center City.

In that case, police arrested three people but could not charge them with a hate crime because neither state law nor the city code makes it a crime to harm someone because of sexual orientation.

The measure approved Thursday, expected to be signed into law by Mayor Nutter, calls for up to 90 days in jail and a fine of up to $2,000 for crimes committed against a person because of sexual orientation, gender identity, or disability. 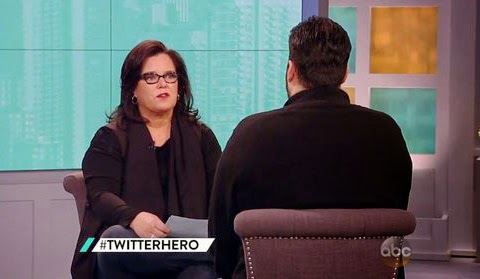 Twitter user @FanSince09, who has been credited in leading a social media manhunt in identifying the suspects in the September 11 gay bashing in Center City, Philadelphia, appeared on The View to share why he decided to put his social media skills to work and help solve a crime.

“I did maybe about 45 minutes of work, but with crowd sourcing, we got at least three people identified within two hours.”

Since the violent attack, a bill that would amend Pennsylvania’s hate crimes statues to include protections for sexual orientation and gender identity has recently passed the House Judiciary Committee 19-4. 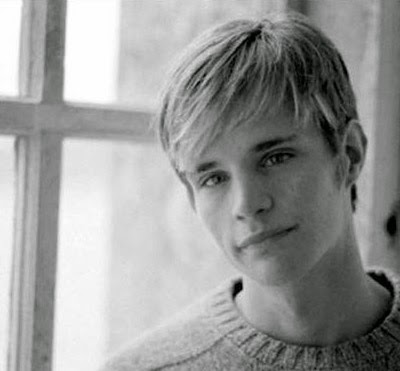 On the 16th anniversary of the passing of Wyoming student Matthew Shepard, his parents talk on the painful memories of their son’s violent death, why they didn’t seek the death penalty for his attackers, and the Matthew Shepard Foundation, which they founded to raise awareness around homophobia and diversity.

Here is the statement which was read to supporters at a rally earlier this week (via Gay Star News):

“Everyone keeps saying that they are sorry this happened to us. But the truth is, we’re sorry. We feel sorry for our attackers – people who believed it was OK, cool, maybe even funny, to use two innocent individuals as their punching bags and not even have the decency to apologize. Words are powerful. A simple, I’m sorry, would’ve went a long way with us,’ they stated.

“You butchered my boyfriend’s beautiful face. You violated our rights. You jeopardized our health and safety in a city that we love and during a time where so much progress around human rights has been made. … We are also determined to do everything in our power to make sure this doesn’t happen to anyone else again.

Three suspects have been charged in the attack that resulted in both victims being hospitalized; one victim suffered a broken orbital bone and a shattered jaw.

The suspects – Kevin Harrigan, Kathryn Knott, and Philip Williams – are due in court December 16th for a preliminary hearing. After extensive interviews with witnesses, the victims and other “persons of interest,” the three have been charged with aggravated assault, criminal conspiracy, simple assault, and recklessly endangering another person.

The three suspects accused of the violent gay-bashing attack ib Center City on September 11th will have a preliminary hearing December 16th.

The three Bucks County residents arrested earlier this month for allegedly attacking two gay men in Center City will have a joint preliminary hearing on Dec. 16, a judge ruled Tuesday.

The defendants – Kathryn Knott, 24, Philip Williams, 24, and Kevin Harrigan, 26 – were excused from having to appear at the status hearing by agreement with the District Attorney’s Office.

But attorneys for Knott, of Southampton, and Harrigan, of Warrington, said their clients are not gay-bashers.

Williams did not utter any homophobic slurs during the Sept. 11 incident near Rittenhouse Square, said his attorney, Fortunato Perri Jr.

“Fortunately, my client will have a chance to present this case in a court of law instead of the court of public opinion,” Perri told reporters.

When asked if Williams had been struck or if he struck either of the two gay men, Perri said: “We’ll resolve that matter in a court of law.”

Attorney Joshua Scarpello, who represents Harrigan, said, “There certainly is another side to this case, there always is, and it’s going to come to light.”

The three defendants are each charged with two counts of aggravated assault, simple assault and recklessly endangering another person; and one count each of criminal conspiracy.

“This vicious attack shocked the entire country. An assault on people because of their sexual orientation has no place in Philadelphia,” District Attorney Seth Williams said at the time of the defendants’ arrests.

The couple, who has been together for six years, told investigators that Harrigan shouted the first gay slur, Williams attacked both of them and that Knott participated in the name calling and physical assault, a police source told the Daily News.

Both gay men were briefly hospitalized, and one suffered severe facial injuries that required his jaw to be wired shut. 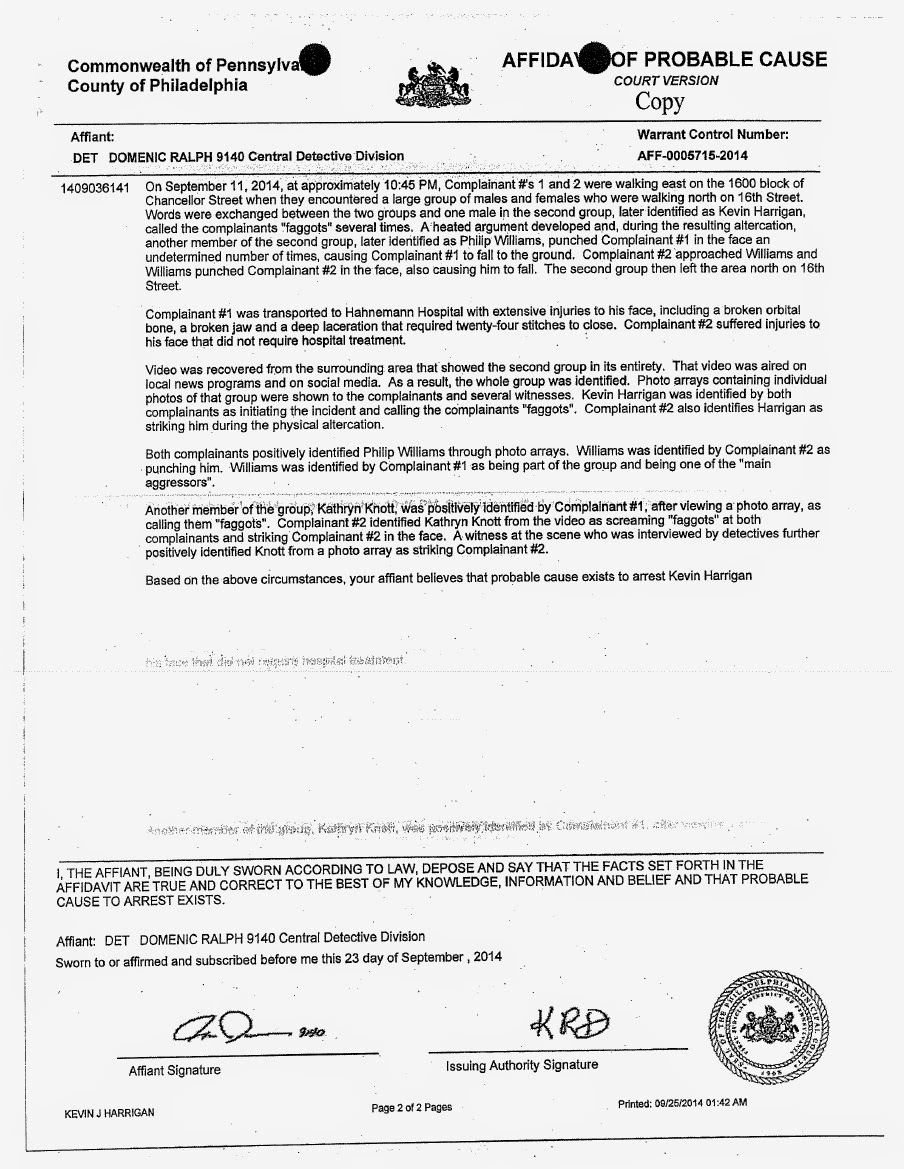 According to recently released court documents regarding the violent gay bashing in Center City two weeks ago, the victims were punched and repeatedly called “faggots” by the three charges suspects.

It should be noted that nowhere in the report is there any mention that the three acted in “self-defense.”

Now that Kathryn Knott, Kevin Harrigan and Philip Williams have been charged with the crime, an affidavit of probable cause describing the incident has been made available by the court.

According to that document, the incident began when “words were exchanged” between the two groups of people, with suspect Kevin Harrigan allegedly calling the victims “faggots” several times before a “heated argument developed.” The affidavit also alleges that Knott screamed “faggots” at them and hit one of them in the face.

On September 11, 2014, at approximately 10:45PM, Conplainant #s 1 and 2 were walking east on the 1600 block of Chancellor Street when they encountered a large group of males and females who were walking north on 16th Street. Words were exchanged between the two groups and one male in the second group, later identified as Kevin Harrigan, called the complainants “faggots” several times. A heated argument developed and, during the resulting altercation, another member of the second group, later identified as Philip Williams, punched Complainant #1 in the face an undetermined number of times, causing Complainant #1 to fall to the ground. Complainant #2 approached Williams and Williams punched Complainant #2 in the face, also causing him to fall. The second group then left the area north on 16th Street.

Video was recovered from the surrounding area that showed the second group in its entirety. That video was aired on local news programs and on social media. As a result, the whole group was identified. Photo arrays containing individual photos of that group were shown to the complainants and several witnesses. Kevin Harrigan was identified by both complainants as initiating the incident and calling the complainants “faggots”. Complainant #2 also identifies Harrigan as striking him during the physical altercation. 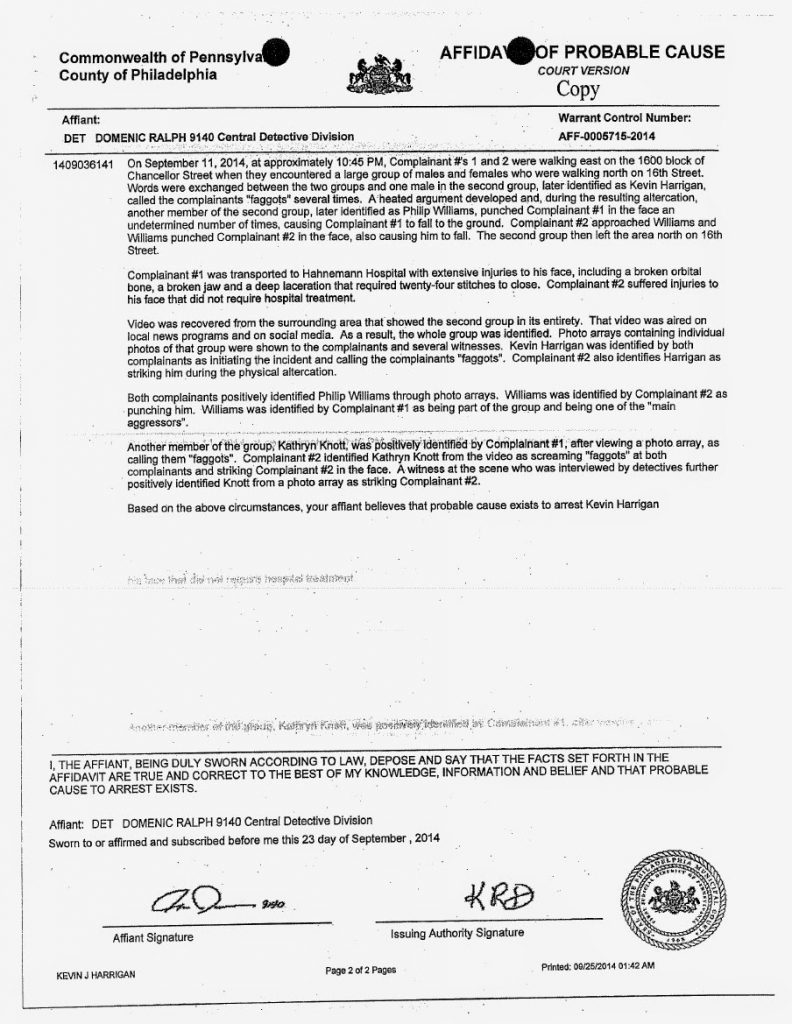 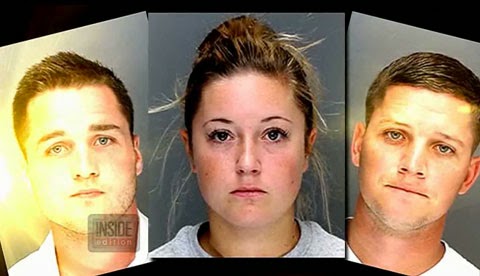 She’s the pretty daughter of a police chief, but 24-year-old Kathryn Knott is now on the other side of the law after a network of civilian sleuths used social media to track her down.

Surveillance video was their only clue. A group of preppy-looking 20-somethings were on a Philadelphia street. Just moments later, there was a brutal assault on two gay men.

Three people have been charged.

These two guys and Kathryn Knott, whose father, Karl, it turns out, is the police chief in a suburban Philadelphia town. They all deny any wrongdoing.

Her social media profile shows a photo of her drinking from a bottle of Fireball whisky.

One tweet reveals she once used her father’s position as police chief to get special treatment.

She tweeted: “A guy ran me off the road. Called my dad ran his license, and got him ticket #lovemydad (@kathryn_knott)”

And: “Dad just let me kick down a door on a raid. Epic”

At an emotional rally protesting the attack, Caryn Kunkle, a friend of the two gay men who were beaten said they are slowly recovering.

Kunkle said, “One of the victims still has his jaw wired shut. He will have it wired shut for another seven weeks. They are both on a liquid diet. Neither one of them can eat solid food.”

There won’t be any more tweets from Kathryn for a while. Her Twitter page has been taken down. 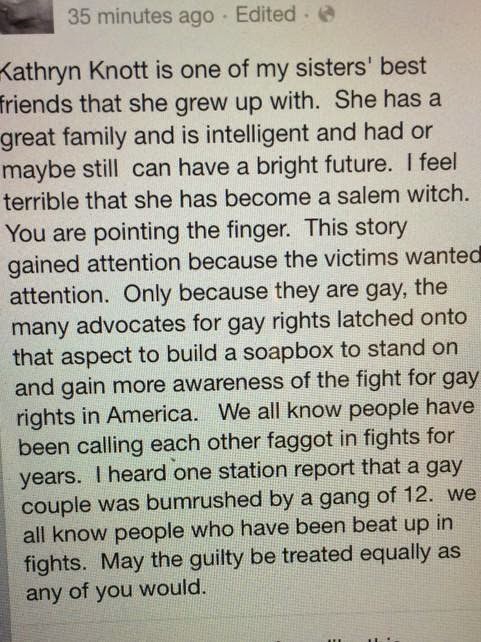 I’m not so sure this is an effective “defense” of Center City gay bashing suspect, Kathryn Knott.

Apparently from the sister of one of Kathryn Knott’s best friends:

“We all know people have been calling each other faggot in fights for years.”

With “friends” like these, who needs enemies? This kind of rhetoric isn’t going to help anyone.

This “sister of a friend” seems to be saying that the word “faggot” was only used as a general term like “asshole” or “jerk.”

EXCEPT, according to multiple accounts, the altercation began with one of the mob asking if the couple was gay, to which the men replied “yes.” So, the use of the word “faggot” would have been in play referencing the men’s sexual orientation from that point out.

That would be the altercation that put two men in the hospital, one with a fractured orbital bone and jaw. The jaw injury was so severe that it has to be wired shut for 8 weeks.

Meanwhile, there doesn’t seem to be any proof or photos released that would indicate the suspects charged with the assault needed to fear for their own safety.

The two men’s injuries were so severe, police initially thought there had been a shooting considering the amount of blood at the crime scene. 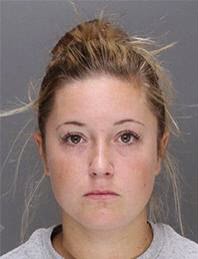 One of the alleged attackers in a brutal assault on a gay couple in Center City was fired from her job at a local hospital Thursday.

Abington Health announced that 24-year-old Kathryn Knott was fired from her job as an Emergency Room Tech late Thursday afternoon.

“Effective today. September 25, 2014, Kathryn Knott has been terminated from her employment at Abington Health,” the hospital said in a statement.

Knott had tweeted several pictures of x-rays and other private medical files of patients during her time as an ER tech at Abington Health. This could be a serious violation of HIPPA laws.

Knott, the daughter of Chalfont, Pennsylvania Police Chief Karl Knott, is one of three suspects charged with the beating of a gay couple on September 11.

Knott, Kevin Harrigan, 26, and Philip Williams, 24, are free on bail less than a day after they surrendered to police.

Authorities arraigned Williams, Harrigan and Knott on aggravated assault, conspiracy and other related offenses early Thursday morning and the group left their Center City jail cells a short time later, according to officials.

At the rally Sims said, “There are some in Harrisburg who object to restoring sexual orientation and gender identity protections to the hate-crime law. But they haven’t been calling for repeal of the law’s remaining protections, for victims targeted because of their race, color, religion or national origin — they know they would take a political hit for that. Unfortunately, they think there’s no political penalty or constituent outrage to face for leaving out women, LGBT people, or people targeted because of their ancestry or mental or physical disability. Pennsylvanians who don’t like this injustice need to let their state representative and senator know now.”

Watch Sims’ impassioned speech this past Tuesday in the state capitol where he expressed his frustration about the LGBT community’s lack of rights outside of marriage.

This state doesn’t offer a single statewide LGBT civil right to people like me other than marriage, and that’s ridiculous,” Sims said, gesturing emphatically.

“Don’t let people tell you that we only have six or seven days left in session,” Sims added. “That’s B.S.!”