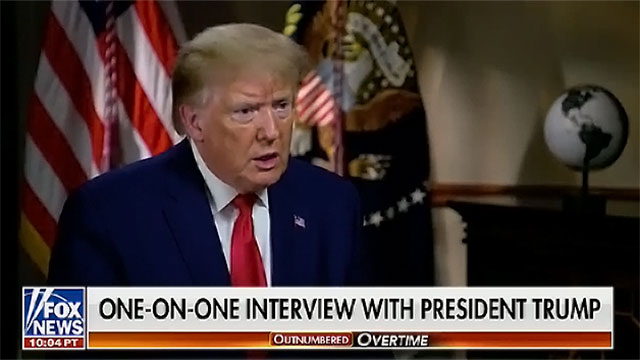 In an interview with Fox News’ Harris Faulkner today, Donald Trump declared many of those protesting in the aftermath of George Floyd’s murder “didn’t know” why they were there.

The remarks came after Faulkner asked what the Donald believes the protesters across the county want or need from him.

“So I think you had protesters for different reasons, and then you had protesting also because they just didn’t know,” Trump said. “I’ve watched. I watched it very closely. ‘Why are you here?’ And they really weren’t able to say. But they were there — for a reason perhaps.

Earlier in the interview, Trump labeled the protests as ‘riots’ and ‘unnecessary.’

He also said that the date of his first campaign rally since the beginning of the COVID-19 health threat on Juneteenth wasn’t scheduled ‘on purpose.’

As many know, June 19 is recognized as Juneteenth, the day the last slaves in the United States were freed. The Trump campaign picked Tulsa, Oklahoma, as the location for the rally.

Black activists consider the date and the location a slap in the face in light of the 1921 ‘Black Massacre’ that occurred in the city 99 years ago. Nearly 300 Black Americans were killed in the incident that was sparked by the accusation a young Black man assaulted a white woman.

“You had protesters for different reasons & then you had protesting also because, you know, they just didn’t know… a lot of them really were there b/c they were following the crowd” — Trump suggests many George Floyd protesters weren’t even aware of what they were protesting pic.twitter.com/KnbTJy2U8m