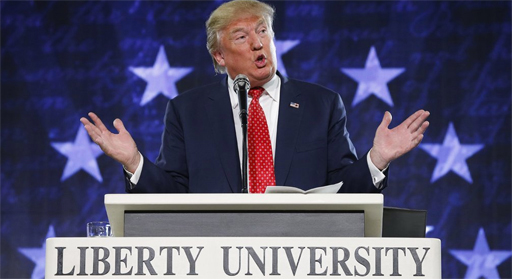 But remember y’all – Donald Trump is a BIG fan of the Bible.

And he decided to throw in some scripture.

The Donald seemed to be referencing the second letter to the Corinthians, or “Second Corinthians.”

Clearly Trump was attempting to curry favor with the verse which reads, “Now the Lord is that Spirit: and where the Spirit of the Lord is, there is liberty.”

Other GOP campaigns and the Twitterverse were thrilled to jump on the bungle:

It won’t matter. Nothing seems to matter.

What is “Two Corinthians?”

Donald Trump Knows The Bible So Well He Misquotes It At Christian University https://t.co/MGcmzwPTce by @katherinemiller i

. @realDonaldTrump does not appear to know that it’s “Second Corinthians” not “Two Corinthians.” https://t.co/IgMW9xcqTf

REMINDER: What happened when Donald Trump was asked what his favorite Bible verse was: pic.twitter.com/SvBASzBSST

Miss Utah, Marissa Powell, didn’t win Sunday night’s Miss USA pageant after botching her interview question, but she did create one of the most viral video momnet in years.

In the interview portion of the competition for the final five contestants, the 21-year-old awkwardly responded to judge NeNe Leakes’s question about income inequality. Her response contains the now-infamous phrase, “create education better.”

Powell, who finished the evening as third runner-up and Miss Photogenic, was given a shot at redemption on the Today show on Tuesday.

Anchor Matt Lauer asks her the question again, to which she replies: “So this is not OK. It needs to be equal pay for equal work, and it’s hard enough already to earn a living, and it shouldn’t be harder just because you’re a woman.”

Powell conceded that her nerves got the better of her on Sunday, and she answered the question without thinking.

Gotta ask though – is it weird that the winner, Miss USA, doesn’t look at Powell once she’s onset? Or is it just me?

Visit NBCNews.com for breaking news, world news, and news about the economy(via Mashable)