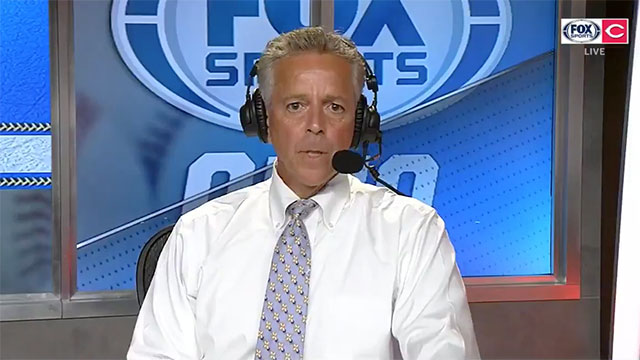 Coming out of a commercial break during the first game of a doubleheader between the Reds and Kansas City Royals on August 19, the play-by-play announcer was heard saying, “One of the f*g capitals of the world.”

Social media lit up about the remark seemingly without Brennaman’s knowledge until two hours later when he addressed the debacle with an awkward apology, pausing mid mea culpa to call a home run. After his statement, he was replaced at the mic.

The 56-year-old expressed his remorse again in a lengthy letter the next day to the editor of the Cincinnati Enquirerwriting, “I hope the LGBTQ+ community, the Reds and their fans and the people of Cincinnati can find a way to think better of me.”

“With all the humility I can muster, I ask for your forgiveness.”

Brennaman has been indefinitely suspended by the Reds since then and last week was removed from Fox Sports’ NFL schedule – a gig he’s has since 1994.

In the past weeks, he’s been on an apology tour of sorts reaching out to LGBTQ groups which, he tells the New York Post, have been forgiving.

Addressing the incident and its fallout with the Post, Brennaman says he doesn’t even remember the context of his remark.

“Everything happened so fast,” he told the Post. “And I’m watching literally everything fall apart at the seams while trying to announce a baseball game.”

“I couldn’t even tell you what happened, where it came from. … Look, I said it is all that matters. The rest of it is irrelevant. I said it. And I own it. And I’m the one who has to live with it.”

The veteran sportscaster added emphatically, “I have never used that word (before) in my life.”

While some are willing to forgive and allow space for some sense of redemption, believing Brennaman had ‘never used that word’ is a bit of a stretch for a few folks.

Ryan Messer, a leading LGBTQ activist in Cincinnati that Brennaman has reached out to, says “If he used it then, he used it before.”

He adds, however, “if we don’t open the dialogue to help explain (the meaning behind the word), how do we learn and grow from it? And that’s where my whole perspective comes, and I’m willing to make sure he understands that, which is why he is coming to my house Saturday to meet my family, my husband, and four kids.”

Messer has publicly called on the Reds to reinstate Brennaman.

“Cincinnati wasn’t always the most welcoming city (for LBGT people),” says Messer, who helped lead an effort to repeal an anti-LGBTQ ordinance in the early 2000s. “I believe I can tell when someone is sincere and I heard that in (Brennaman’s) voice.”

Brennaman also sat down with local gay newscaster Evan Millward, who believes “We should forgive, and we largely have forgiven.”

“But you can’t just then sweep it under the rug and then place it into this whole societal cancel-culture thing,” Millward told the Post. “If we just shut people down, and tell them they’re trash and that they’re canceled, then we’re avoiding a difficult dialogue.”

For his part, Brennaman told the Post, “If I get another chance, someone will be hiring a better person than the person who walked out the door that night on August 19.”

What do you think, readers? Should it be one strike and you’re out? Or is there space to allow for redemption? 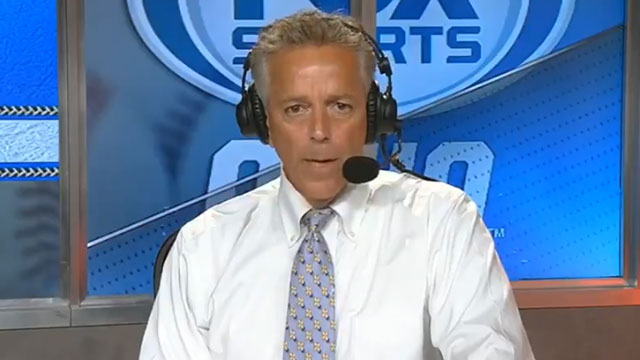 Thom Brennaman, longtime Fox Sports broadcaster for major league baseball’s Cincinnati Reds, is the latest sportscaster to experience a hot mic gaffe and it may cost him his job.

Moments after the Fox Sports Ohio broadcast returned from a commercial break before the top of the seventh inning in the first game, the 56-year-old sportscaster apparently didn’t realize his mic was hot as the listeners heard Brennaman say, “One of the fag capitals of the world.”

He went on to call the remainder of the first game and the first four innings of the second game while a clip of the slur went viral on social media.

Then, more than two hours after the gaffe, during the fifth inning of the second game, Brennaman issued an apology for using the slur saying he was “deeply ashamed” — interrupting the mea cupla to call a home run — before turning over play-by-play duties to Jim Day.

“If I have hurt anyone out there, I can’t tell you how much I say from the bottom of my heart, I’m so very, very sorry,” Brennaman told his listeners. “I pride myself and think of myself as a man of faith — as there’s a drive into deep left field by Castellanos, it will be a home run, so that will make it a 4-0 ballgame.”

“I can’t begin to tell you how deeply sorry I am. That is not who I am, it never has been, and I’d like to think that maybe I could have some people that could back that up. I am very, very sorry, and I beg for your forgiveness.

You hear the clip that went viral below followed by his apology.

Brennaman is a Cincinnati native who has been doing play-by-play of MLB games for more than three decades including calling Reds games since 2007.

The Reds issued a statement afterward saying the team was “devastated by the horrific, homophobic remark” and announcing Brennaman had been suspended.

Even before the Reds had issued their statement, Cincinnati pitcher Amir Garrett tweeted, “To the LGBTQ community just know I am with you, and whoever is against you, is against me. I’m sorry for what was said today.”

To the LGBTQ community just know I am with you, and whoever is against you, is against me. I’m sorry for what was said today.

“The Brennaman family are Cincinnati sports icons with a powerful voice in our community, which makes it even more disgusting and totally unprofessional to hear such language used. The Reds have been proud supporters of their LGBTQ+ fans, and this language cannot be tolerated. Period. Cincinnati is leading the way for LGBTQ+ equality. We are on the right side of history and it’s incredibly disappointing to hear Mr. Brennaman use such language of hate when our country is begging for unity.”

Reading opinions online, there seem to be two camps about this: one wondering if a single mistake should cost you your job, and the second saying there’s no room for homophobia in sportscasting.

Of course, homophobia is bad and shouldn’t exist anywhere.

I’ll add that after years and years of sitting behind a mic, it’s a bit staggering that Brennaman would such a mistake at this level of broadcasting. But, everyone screws up at some point.

What strikes me in this situation is, listening to Brennaman’s voice, he says the word “fag” confidently and with conviction. It doesn’t sound like a word foreign to him, a word he ‘never uses.’ Even as he declares “This is not who I am,” this occurred in a moment he thought he was private. I do think it reveals him to the world a bit.

Someone wrote on Twitter that in baseball it’s three strikes and then you’re out. Should Brennaman be terminated? Fined? Demoted? 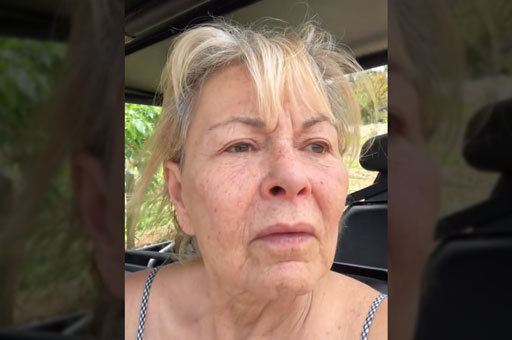 Roseanne Barr took to her YouTube channel to share some odd musings on the use of the word ‘fag,’ and how she herself put the ‘Q’ in LGBTQ.

The comedienne began in a pensive mood, complaining about the use of the ‘F’ word.

“Man, the word ‘fag’ is a really hateful word, isn’t it?,” begins the comedian while apparently sitting in her car. “Especially when it’s when it’s like one gay calling another gay guy that? Hoo! Have you ever been in the middle of one of them hate marriages? Hoo! It’s like, wait a minute, we’re not supposed to say that word. How come you’resaying that word? What?”

She then complains that while some members of the LGBTQ community use the word, she as a straight woman is not allowed to use the slur.

“But it is a hateful word and we should get rid of it,” she decides, but then clarifies, “Get rid of it being spoken.”

Ok, so folks should stop saying the word but they can write it? No. Paint it on a wall? No.

The 66-year-old then appears to take partial ownership of the slur by declaring she, herself, is ‘queer.’

“All that LGBTQ stuff, let me just be real, I put the Q in the LGBTQ,” announces the dethroned sitcom queen. “Okay, because I am queer as two motherf**kers.”

Now, we’re off in the underbrush on the way to Poughkeepsie, but we gotta see where this goes, right?

“I’m queer, I’m alien, I don’t belong here with all these people,” she adds although it appears she’s alone, but, you know. “They makes no sense. Theyare very queer.”

“That makes me queer, I guess,” she declares in summation as she starts her car. “But I did put the Q in it. Bye!”