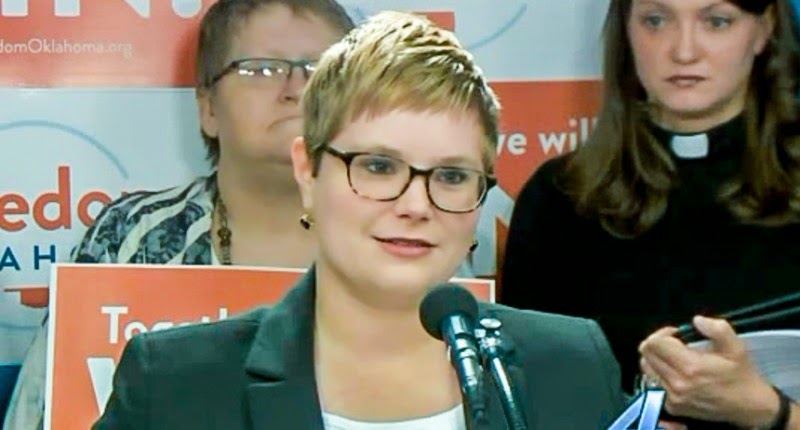 This is my favorite thing today.

As Oklahoma continues to try and thwart the progress of marriage equality in the state, State Rep. Chuck Strohm (R) has introduced the “Oklahoma Religious Freedom Act” which would allow allow businesses to deny services to gays and lesbians if it was “against the person’s religious beliefs.”

As an amendment to that legislation, state Rep. Emily Virgin would like to require businesses that do not provide public accommodations to LGBT folks – based on their religious beliefs – to post that declaration visible for the public to see.

“Any person not wanting to participate in any of the activities set forth in subsection A of this section based on sexual orientation, gender identity or race of either party to the marriage shall post notice of such refusal in a manner clearly visible to the public in all places of business, including websites,” the amendment states.

“The notice may refer to the person’s religious beliefs, but shall state specifically which couples the business does not serve by referring to a refusal based upon sexual orientation, gender identity or race.”

The Gayly noted that Virgin’s amendment “would save minority couples from facing the indignity of being refused service.”

In related news, House Bill 1125, by Rep. Todd Russ (R), passed the state House today by a vote of 67-24. The law would abolish the government issuance of marriage certificates.

Instead, the law would require those officiating marriage ceremonies to file after-the-fact “certificates of marriage” with court clerks’ offices. Those not choosing a religious ceremony could file affidavits of common law marriage.

Opponents of HB1125 say the federal government could refuse to acknowledge these proposed ‘marriage certificates,’ thus risking the loss of hundreds of federal benefits for marriage couples.