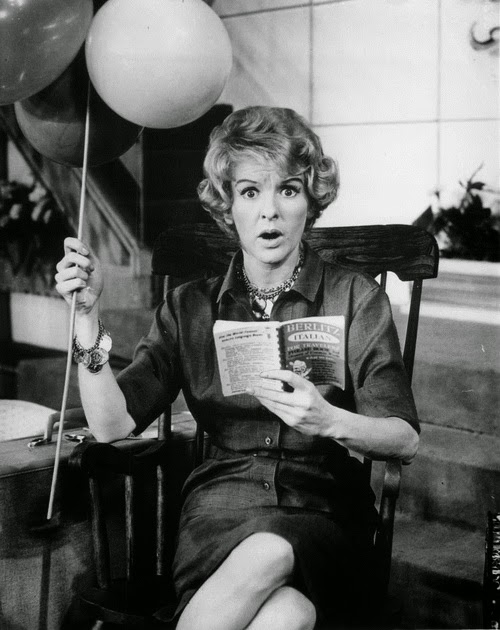 A Facebook friend posted a link to James Grissom’s blog which shares excerpts from his excellent book, Follies Of God.

I can’t recommend it enough.  As a matter of fact, it would make for a most fabulous Christmas gift for those you know who love to read what great artists really think.

He has a most marvelous blog where he shares much of his experience conducting the interviews.

In the excerpt below, James was spending time with Broadway legend Elaine Stritch. Here’s just a taste.

“Listen and look,” Elaine Stritch told me as we walked down Madison Avenue one day–the Sunday, in fact, when the death of Sylvia Syms had been announced–“all of these people, every last one of them, needs or wants something from someone else. You name it–love, attention, affirmation, help, aid. Something. And most of them aren’t going to get it. You know, the poor bastards are starving and all that. They aren’t going to get it because they don’t ask, because they don’t announce what it is they want–and deserve, I might add. Well, I get what I need and I usually get what I want. I ask; I tell; I demand.”

She stopped outside of an apartment building and pulled out a plastic container of fruit. “I’m falling,” she told me, “so bear with me.” She ate a bit, closed the lid, shoved it in her bag, and paused. For a little too long. A good film director would have said she was lagging or milking the moment. She looked at me finally–as only Elaine Stritch could–and delivered the following:

“No one is going to say of you in years to come that you were so polite, so sweet. If they talk of you at all, it’s going to be because you got the story, you did the job. So do the fucking job. If I didn’t like you or think you had talent, I would have kicked you to the street days ago. Get the job done and don’t give a shit what people think. You have a serious and beautiful assignment from Tennessee Williams, for Christ’s sake, and that is what is important, not what other people think about you. Push the doors open and get in.”

She hugged me and we walked to her apartment on East 72nd Street, where, at the door, and with the doorman as an audience, she turned to me and said, “You think I’m mad at you, and you’re hurt. You’ll get over it. Get over it by two tomorrow, because that’s when we’re meeting again. Sylvia Syms is dead, but we’re not. We have things to do.” 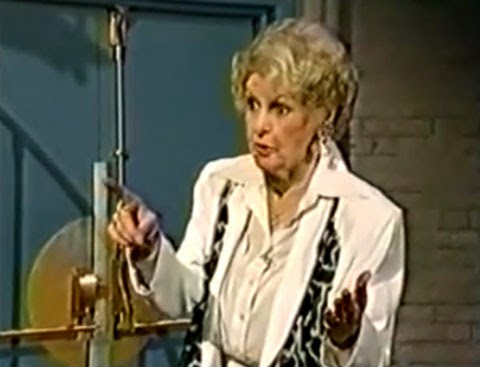 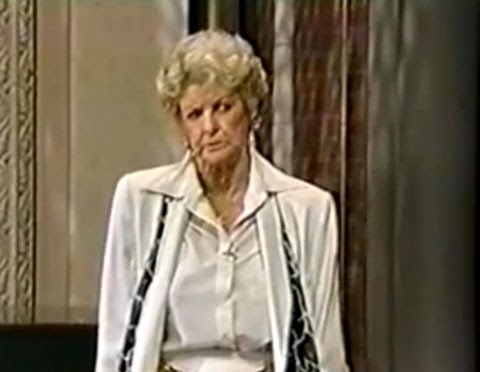 Stop everything you’re doing and watch this early skit from the David Letterman show with the fab (and now sadly gone-too-soon) Elaine Stritch.

This is classic Stritch.  I literally laughed out loud. 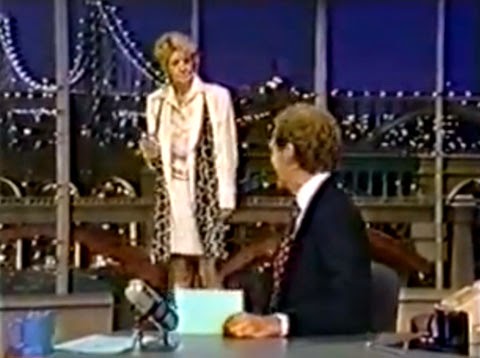 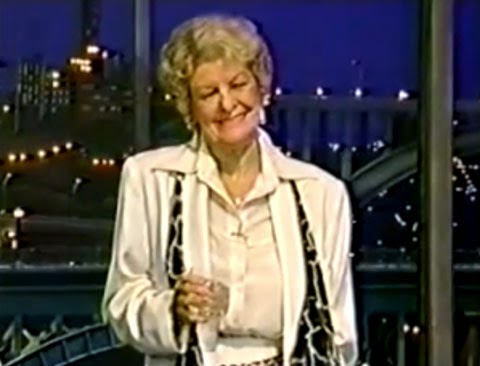 (via my “anonymous” Randy Report reader) 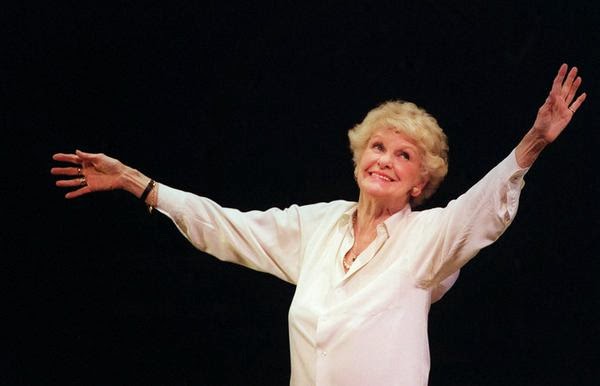 One of Ms. Stritch’s most memorable appearances was in the Sondheim musical “Company” (1970), in which, as a cynical society woman, she saluted her peers with the vodka-soaked anthem “The Ladies Who Lunch.” It not only brought her another Tony nomination but became her signature tune — at least until, in her 70s, she became equally known for Sondheim’s paean to showbiz longevity and survival, “I’m Still Here.” It was the centerpiece of her 2001 one-woman show, “Elaine Stritch at Liberty,” and she sang it in 2010 at Mr. Sondheim’s 80th-birthday concert at Lincoln Center (Patti LuPone took on “The Ladies Who Lunch”) and at the White House for President Obama.

The five time Tony Award nominee (winning for her one woman show “Elaine Stritch at Liberty” ) also was honored with an Emmy Award for Outstanding Guest Actress in a Drama Series for Law & Order.

Stritch was also nominated for a Grammy Award in 2005 for Best Spoken Word Album for Children for The Best Halloween Ever.

The actress was inducted into the American Theater Hall of Fame in 1995. 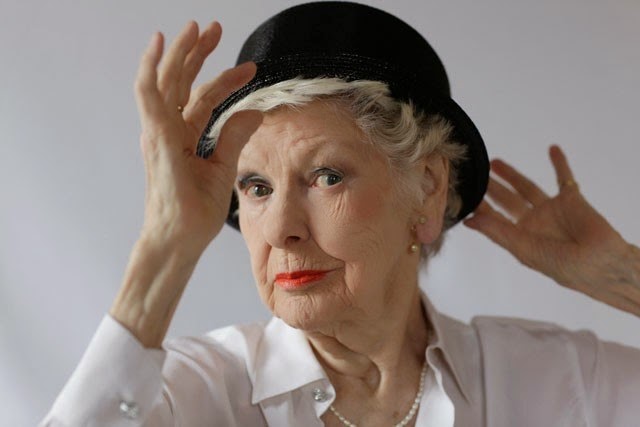 PrideSource has a great interview with Broadway legend Elaine Stritch. I highly recommend reading it.

Among many things that stand out is Stritch’s statement that she never really knew she had a following in the gay community until recently:

A Broadway legend has to be aware the community thinks she’s an icon, but no, not Stritch. “I’m just becoming aware of it,” she admits, but why now? “By articles such as this one. I really have become very much aware, first of all, what great audiences they are. And it isn’t that I finally discovered that gay people understand me and straight people don’t – oh, no no no. Not a word of truth in that. I can’t tell you how many straight people I know that think I am the cat’s pajamas.”

But not knowing you have a gay following until now, 70 years into your career … a career in one of the gayest professions pursuable: the theater? Stritch is as surprised as you are.

She also addresses how much she loves gay men’s humor and her deep affection for Edward Albee.

A new documentary on her life today “Elaine Stritch: Shoot Me” was recently released. 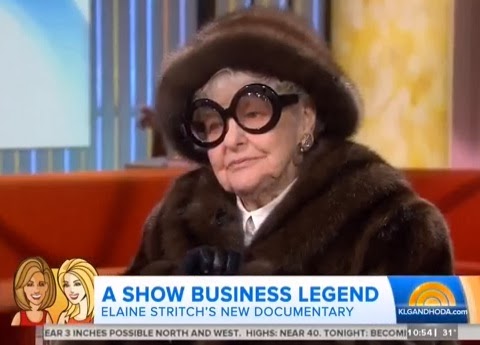 After Kathy Lee Gifford pointed out Stritch’s reputation for saying whatever she feels, the actress said it’s the only natural way to go.

Elaine is promoting a new documentary about her – “Elaine Stritch: Shoot Me” currently making the rounds at film festivals. 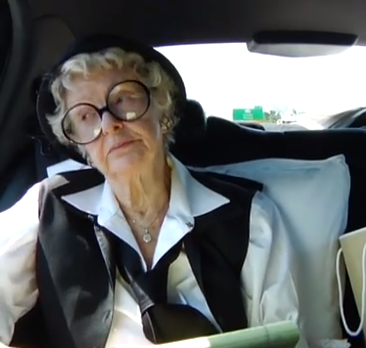 Director Chiemi Karasawa crafts a candid portrait of the brash and brassy grand dame as she follows Stritch from rehearsals and a side gig playing Alec Baldwin’s mother on “30 Rock” to reveal the complex, wise and witty woman behind the legend in Elaine Stritch: Shoot Me.
Intimate verité footage is paired with interviews with Stritch’s friends and admirers (including Nathan Lane, Tina Fey and Hal Prince) to capture the struggles and triumphs in the life of an Emmy and Tony-winning performer, resulting in a documentary that is hilarious, poignant and inspiring.

Elaine Stritch: Shoot Me is screening at festivals.

We all know the brilliance of Elaine singing “Ladies Who Lunch” from COMPANY and “Broadway Baby” from FOLLIES.

But if you missed her Tony Award winning one woman show “Elaine Stritch – At Liberty,” here’s just one example why you have to go buy/rent/find a copy and watch it.

I was lucky to see it. This is just a tip of the iceberg.

No one can do what Elaine can do.

Not sure where my original post went that I did yesterday to celebrate the incredible Elaine Stritch’s birthday… But here it is again.

I love unique, one of a kind performers. And Elaine is certainly in that class. Those people that are unlike anyone else in the world. That’s one reason why I’m never all that up to date on pop music today. All the big artists today start to sound the same to me. And it just isn’t my thing most of the time.

I have had such an long relationship with this song, and Elaine’s performance on the Original Broadway Cast recording. I think at the age of 8 or 9, I somehow was given an album of “great songs from Broadway” (imagine that? someone clearly saw tap shoes and a sense of fashion in my future).

Anyway, I remember listening to “Ladies Who Lunch” over and over and over again even at that age. Something, the imagery of ladies wearing hats, going to the theater, having cocktails in the middle of the afternoon – from the perspective of one woman’s sophisticated grit and drop-dead cynicism – was mesmerizing to me. The juxtaposition of the smooth, cool bossa nova accompaniment matched with Elaine’s edge and cutting sarcasm was clearly theatrical to me, even at that age.

Even at the age of 8 or 9, in Fort Worth Texas, I had a sense of this world – these ladies in airy, fake garden, faux-chic lunch spots. Women dressing up, being on committees, going to country clubs even though no one really played golf or tennis. “Rushing to their classes in optical art, wishing it would pass.” Going shopping in department stores that looked like what we saw on TV – with hats that no one ever bought displayed elegantly and mannequins displaying reserved, frozen, laissez faire “hands and wrists flipped up” poses.

I think my perspective and connection was heightened somehow by the fact that my own mother had died a few years before, so I was really watching and observing women that I “knew” but really didn’t know. It was like watching a show. It all seemed cool and glamorous in some way, but even at my young age I remember the sense of detachment. The world was spinning past them, and so many were trying to just keep up.

It sounds sad, but I love the feeling I get when I think of those days. It’s part of the movie in the mind of a then young man. And this song was the soundtrack to many scenes. Here’s to the ladies who lunch.

And to Elaine. Everybody rise.