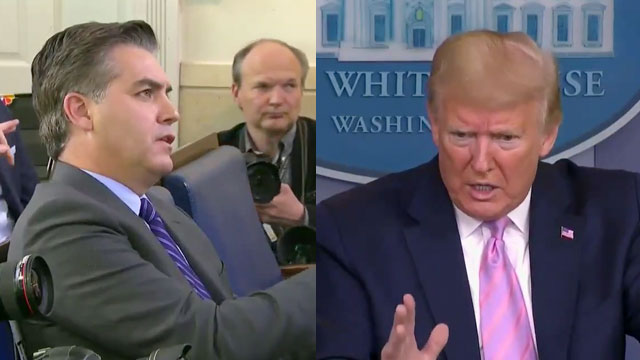 The U.S. does not have the ‘best’ testing system. As of April 1, dozens of countries have far higher testing rates including Germany, Italy, Norway, S. Korea, Canada, Australia, & Estonia.

The White House had promised to conduct 27 million tests by the end of March. As of April 9, Trump himself told the press only 2 million tests had been administered.

Based on those 2 million tests, the U.S. is testing approximately 6 people per thousand. Countries like South Korea and Germany are triple that rate.

In the same exchange between Acosta and Trump, the Donald told the CNN journalist, “You shouldn’t be asking that kind of a question … it is very insulting to a lot of great people.”

People who are on point don’t get defensive when asked questions. They have answers. 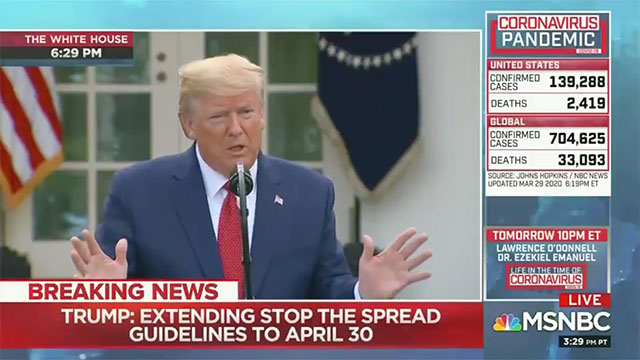 Donald Trump announced an extension of his administration’s “15 days to slow the spread” shutdown guidelines for 30 more days as the reality of increasing coronavirus infections and deaths set in.

Public health officials and governors had urged him to change course from lifting the shutdown on Easter Sunday.

The president set April 30 as the new deadline for the social distancing guidelines in a Sunday evening briefing from the White House.

Driving the news: With the original 15-day period that was announced March 16 about to end, officials around the country had been bracing for a premature call to return to normalcy from a president who’s been venting lately that the prescription for containing the virus could be worse than the impacts of the virus itself.

“We had an aspiration” of Easter, Trump said, but when he heard the numbers of potential deaths, he realized he couldn’t push a reopening of the economy as soon as he previously had foreshadowed.

Trump explained his turnaround by saying his government’s modeling shows the peak death rate will likely come in two weeks. He said that 2.2 million people could die if the government did nothing and the public didn’t do the social distancing. “Nothing would be worse than declaring victory before the victory is won,” he said.

Breaking: Dr Fauci, speaking after President Trump, says the risk of hundreds of thousands deaths in US from coronavirus has prompted the extension of restrictions to April 30th in the hope of bringing these numbers down.

President Trump says he doesn’t believe floating Easter Sunday as a day to ease guidelines was not a mistake because it was “aspirational.” Now, he says Easter should be the “peak” of the coronavirus outbreak in the United States. 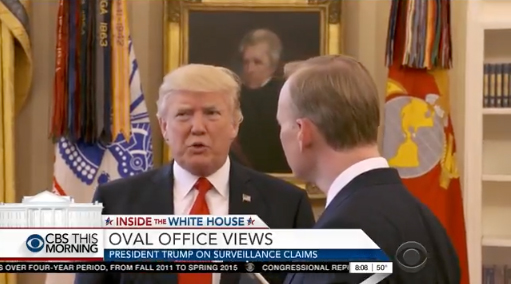 President Trump gets very defensive when asked if he stands by his allegation that President Obama “wiretapped” his phones.

Watch below as CBS’ John Dickerson asks Trump if he stands by his statement that Obama is a “sick” and “bad” man, which he tweeted in early March.

Answer – “I don’t stand by anything.”

Trump kept telling Dickerson to “figure it out yourself.”  And when Dickerson says, “I want to hear it from you – you don’t want it to be ‘fake news.'”

Trump replied, “You don’t have to ask me because I have my own opinion; you have your own opinion.”

Frustrated with actual questions, Trump finally dismisses Dickerson with a wave of his hand.