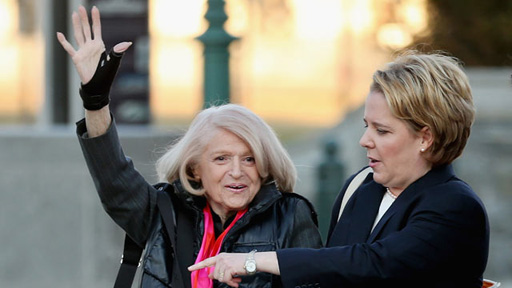 Edie Windsor’s life story was a lesson in how two people falling in love can change the world.

Edith Windsor, the gay-rights activist whose landmark Supreme Court case struck down the Defense of Marriage Act in 2013 and granted same-sex married couples federal recognition for the first time and rights to myriad federal benefits, died on Tuesday in Manhattan. She was 88.

Her wife, Judith Kasen-Windsor, confirmed the death but did not specify a cause. They were married in 2016.

Four decades after the Stonewall Inn uprising fueled the fight for lesbian, gay, bisexual and transgender rights in America, Ms. Windsor, the widow of a woman with whom she had lived much of her life, became the lead plaintiff in what is widely regarded as the second most important Supreme Court ruling in the national battle over same-sex marriage rights.

The Windsor decision was limited to 13 states and the District of Columbia. But in 2015, the Supreme Court held that same-sex couples had a constitutional right to marry anywhere in the nation, with all the protections and privileges of heterosexual couples. Its historic significance was likened to that of Lawrence v. Texas in 2003, which decriminalized gay sex in the United States.

Ms. Windsor had just wanted a tax refund. But for thousands struggling for gender equality, the stakes went far beyond tax advantages available to married heterosexuals, including Social Security, health care and veterans’ benefits; protection in immigration and bankruptcy cases; and keeping a home after a spouse had died, as well as food stamps, green cards and federal aid to the poor, the elderly and children.

Like countless others, Ms. Windsor had been snared by the Defense of Marriage Act of 1996, which barred same-sex married couples from federal recognition as “spouses,” effectively excluding them from federal benefits available to married heterosexuals — precisely 1,138 benefits, according to a count by the Government Accountability Office, Congress’s fiscal watchdog agency.

After living together for 40 years, Ms. Windsor and Thea Spyer, a psychologist, were legally married in Canada in 2007. Dr. Spyer died in 2009, and Ms. Windsor inherited her estate. But the Internal Revenue Service denied her the unlimited spousal exemption from federal estate taxes available to married heterosexuals, and she had to pay taxes of $363,053.

She sued, claiming that the law, by recognizing only marriages between a man and a woman, unconstitutionally singled out same-sex marriage partners for “differential treatment.”

Affirming two lower court rulings, the Supreme Court overturned the law in a 5-4 ruling, citing the Fifth Amendment guarantee that no person shall be “deprived of life, liberty or property without due process of law.”

An LGBT hero and history-maker