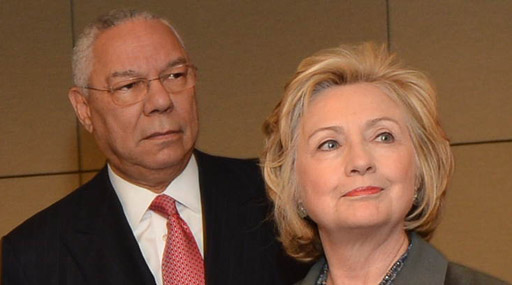 The former George W. Bush cabinet member spoke at a luncheon on Long Island and, according to Newsday reporter Robert Brodsky, told attendees that Republican nominee Donald Trump “insults us every day” and is “selling people a bill of goods,” and so he will cast his vote for fellow ex-secretary Clinton. Powell has previously resisted declaring his support for either candidate, but has chided Trump as a “national disgrace.”

Boom. Colin Powell says he will vote for Hillary Clinton. Says will serve w/ distinction and cites experience and stamina 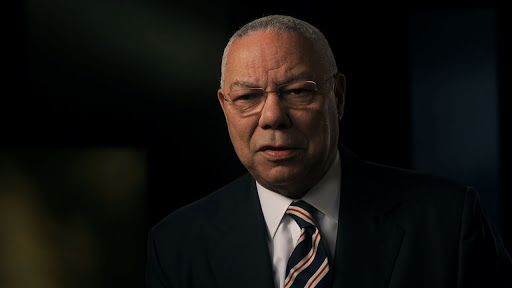 It appears email hacking continues to be the latest rage in this crazy election.

Today, we hear that hacking site DCleaks.com has released two years worth of former Secretary of State Colin Powell’s private emails. Among the more interesting communications are those that refer to Donald Trump as a “national disgrace” and Republicans’ Benghazi investigations as a “witch hunt.”

Powell has privately denounced Republican nominee Donald Trump in remarkably strong terms. “Trump is a national disgrace and an international pariah,” Powell wrote in an email this June, as BuzzFeed News first reported. The email was sent to a journalist who had previously worked for Powell.

In another email, Powell wrote that Trump “appeals to the worst angels of the GOP nature and poor white folks,” according to CNN. And elsewhere, he wrote that “the whole birther movement” — headed by Trump — “was racist.”

Powell also had a similarly strongly worded dismissal of Republicans’ obsession with investigating the Benghazi attacks, and suggested the blame should fall on the late ambassador Chris Stevens for not taking his own security seriously enough. “Benghazi is a stupid witch hunt,” he wrote in a December 2015 email to Condoleezza Rice, again according to BuzzFeed News. “Basic fault falls on a courageous ambassador who thoughts [sic] Libyans now love me and I am ok in this very vulnerable place.”

Powell told NBC News that the emails are indeed real, adding, “The hackers have a lot more.”

DCLeaks has been previously been alleged to have ties to Russian intelligence. 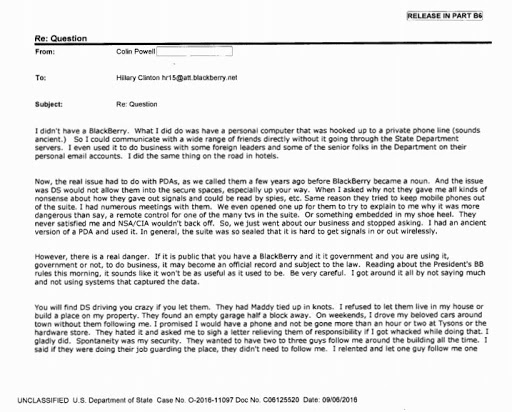 Discovered in the recent batch of emails from Hillary Clinton’s private server is an communication from former Secretary of State Colin Powell to Clinton informing her how he used his own private email account during his time at the State Department.

Clinton has said in the past that Powell advised her early on in her time as Secretary of State about email use, although Powell says he didn’t remember any such communications.

Up to now, this has been a question of who’s telling the truth? Did Powell advise Clinton on email use or not?

“Be very careful,” Powell told Clinton in a January 2009 exchange, saying that using a BlackBerry for State Department work could make the messages “part of the official record and subject to the law.”

He also admitted to going around State Department servers in diplomatic discussions.

Clinton had asked her predecessor about restrictions on BlackBerry use in the department, though Powell replied that didn’t have the device and used a computer hooked up to private phone line to communicate with friends.

Rep. Elijah Cummings, who released the exchange as a member of the House Oversight Committee, said that the exchange shows “Secretary Powell advised Secretary Clinton with a detailed blueprint on how to skirt security rules and bypass requirements to preserve federal records.”

“What I did do was have a personal computer that was hooked up to a private phone line (sounds ancient.) So I could communicate with a wide range of friends directly without going through the State Department servers. I even used it to do business with some foreign leaders and some of the senior folks in the Department on their personal email accounts. I did the same thing on the road in hotels.” 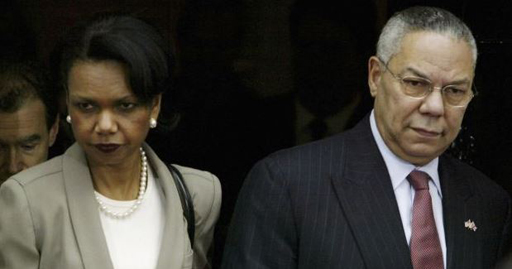 ABC News is reporting that Hillary Clinton wasn’t the Secretary of State to utilize a private email account.

It turns out immediate staffers for Condoleezza Rice, and Colin Powell himself, used non-State department email accounts while serving at SOS. These accounts have been found to have classified information on them.

Colin Powell and the immediate staff of Condoleezza Rice, both of whom served under President George W. Bush, also had information that was later deemed classified on non-State Department email accounts, according to a new memo from the State Department’s Inspector General, described to ABC News by Rep. Elijah Cummings.

That memo, dated Feb. 3 and addressed to Under Secretary of State for Management, Patrick Kennedy, was shared with Cummings, the ranking member of the House Committee on Oversight and Reform. ABC News has not seen the memo.

Cummings, who has long been critical of the many Republican-led investigations into Clinton’s email use, says this is just further evidence they are out to derail her campaign for President.

“Based on this new revelation, it is clear that the Republican investigations are nothing more than a transparent political attempt to use taxpayer funds to target the Democratic candidate for President,” Cummings said in a statement.

Since Rice and Powell were in a Republican administration, it’ll be interesting to see how rabid anti-Hillary folks will try and square this new information. 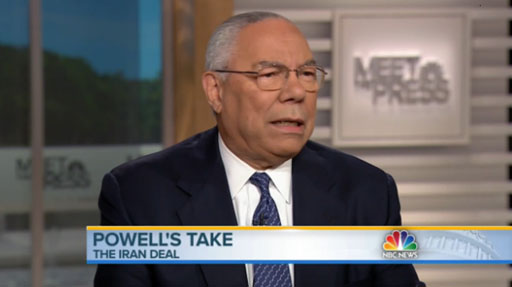 Powell said the opponents of the proposal were ignoring the rapid development of Iran’s nuclear program dating back to the Bush years. 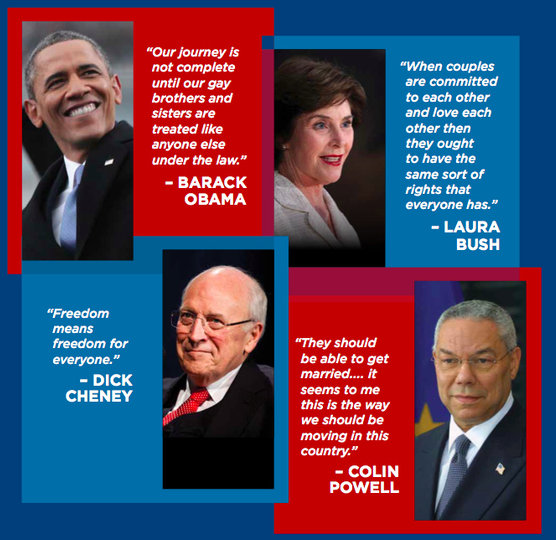 This is a BIG deal.

The Respect For Marriage Coalition will today launch a national print and television campaign in support of marriage equality. The coalition is made up of several progressive and LGBT groups like Freedom To Marry and the Human Rights Campaign.

In addition, a full-page print ad (below) will appear in the New York Times, the Wall Street Journal, and the Washington Post in the next few days. 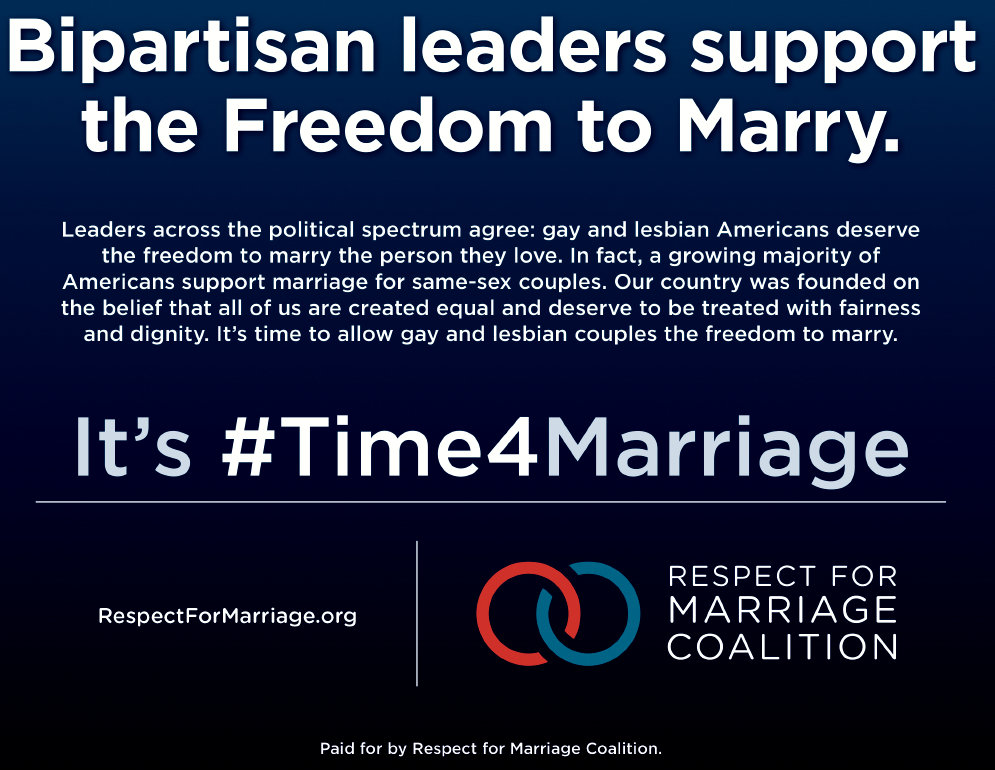 “When he took over, the country was in very very difficult straits. We were in the one of the worst recessions we had seen in recent times, close to a depression. The fiscal system was collapsing. Wall Street was in chaos, we had 800,000 jobs lost in that first month of the Obama administration and unemployment peaked a few months later at 10 percent. So we were in real trouble. The auto industry was collapsing, the housing was starting to collapse and we were in very difficult straits. And I saw over the next several years, stabilization come back in the financial community, housing is now starting to pick up after four years, it’s starting to pick up. Consumer confidence is rising.” – Former Secretary of State Colin Powell, announcing his endorsement of President Obama.

Gen. Colin Powell said Wednesday on CNN’s “The Situation Room” that he supports legal same-sex marriage, either at the state or federal level.

“I have no problem with it,” he said in the interview, which will air at 5 p.m. ET. “In terms of the legal matter of creating a contract between two people that’s called marriage, and allowing them to live together with the protection of law, it seems to me is the way we should be moving in this country. And so I support the president’s decision.”


President Barack Obama announced his support of same-sex marriage, a change in his position, in early May.

Powell’s statements on Wednesday also represented a turning point in his own public statements on the matter. The former secretary of state was chairman of the Joint Chiefs of Staff when the military “Don’t Ask, Don’t Tell” position was implemented.

“It was the Congress that imposed ‘Don’t Ask, Don’t Tell,’ it was certainly my position, my recommendation to get us out of an even worse outcome that could have occurred,” Powell told CNN’s Wolf Blitzer, recalling former President Bill Clinton’s support of overturning a ban on military service for gay individuals. After public opposition, “Don’t Ask, Don’t Tell,” was seen as a compromise.

Powell said he is aware of religious objections to same-sex marriage, but spoke primarily about it as a matter of public policy.

“I respect the fact that many denominations have different points of view with respect to gay marriage and they can hold that in the sanctity in the place of their religion and not bless them or solemnize them,” he said.

He said he has “a lot of friends who are individually gay but are in partnerships with loved ones, and they are as stable a family as my family is and they raise children. And so I don’t see any reason not to say that they should be able to get married under the laws of their state or the laws of the country.”

In 2010, Powell said he favored a military repeal of the “Don’t Ask, Don’t Tell” policy and was in “full support” of Congressional action which resulted in the policy’s repeal.

In an appearance on CBS’ Face The Nation, Former Secretary of State Colin Powell made it clear he wasn’t thrilled with the way Former VP Dick Cheney has been hyping his new book “In My Time.”

Referring to the language Cheney has used of late – which he predicted will have “heads exploding all over Washington” – Powell said That’s “the kind of headline you might see [on] one of the supermarket tabloids.” He added “it’s not the kind of headline I would have expected to come from a former Vice President of the United States of America”

Via ThinkProgress.org: In a withering criticism of the former vice president, Powell goes on at length and in detail to explain how the “cheap shots” Cheney aims at Powell and “other administration officials” are false, and how Cheney is himself to blame for much of it. “I’m the one who said to President Bush, [about Iraq] that if you break it, you own it,” Powell said, but “Mr. Cheney and many of his colleagues did not prepare for what happened after the fall of Baghdad.” On the Valerie Plame scandal, Powell says “White House operatives,” especially those “on Mr. Cheney’s staff,” did not fully cooperate in the FBI’s investigation and were not “forthcoming.” Powell also addresses his 2004 resignation, his speech the United Nations about the Iraq war, and other accusations Cheney makes about Powell in the book.

Powell said Cheney also unfairly attacks former Secretary of State Condoleezza Rice, former CIA chief George Tenet, and even President Bush himself. “It’s not necessary to take these kind of barbs and then try to pump a book up by saying ‘heads will be exploding,’” Powell says, noting Cheney’s comments go beyond mere disagreements are personal in nature.

This isn’t the first time Powell and Cheney have publicly feuded. Powell’s former chief of staff once referred to Cheney as “evil,” and Cheney has said he agreed with Rush Limbaugh over Colin Powell after the Powell criticized the Limbaugh’s divisive rhetoric.