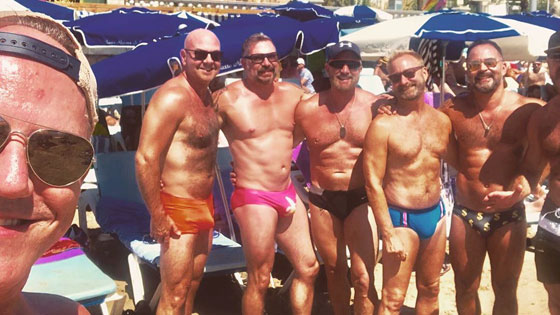 • Instagram: That time you fly across the world and wind up (surprise!) at Bear Week in Sitges, Spain, by happy accident with old friends. #goodtimes

• CNN: The Supreme Court of the Philippines dismissed a request to legalize same-sex marriage in the country. The high court said in a statement it booted the case due to plaintiffs’ “lack of standing” and for “failing to raise an actual, justiciable controversy.” The high court acknowledged that the 1987 Constitution “does not define or restrict marriage on the basis of sex, gender, sexual orientation, or gender identity,” but urged Congress to address the recognition of same-sex unions.

• Bloomberg: The Trump Energy Department has reversed an Obama-era regulation requiring that light bulbs commonly used in recessed lighting and track lighting meet the same energy efficiency standards that effectively phased out the traditional incandescent bulb. The Energy Department said the change “does not prevent consumers from buying the lamps they desire.” The standards would have applied to roughly half of the six billion light bulbs in use today and would have saved consumers billions in energy costs and avoid millions of tons in carbon dioxide emissions.

There is only one reason @realDonaldTrump is rolling back efficiency standards for light bulbs. His guiding principle is that if Obama supported it, Trump opposes it

• Fox KTVU: Following the mass shooting in Gilroy, California, the city of San Francisco has formally adopted a resolution calling the National Rifle Association a domestic terrorist organization. The resolution calls on other cities and government entities to make similar declarations. The resolution itself has no legal weight.

• Associated Press: Defense Secretary Mark Esper approved the use of $3.6 billion in funding from military construction projects to build 175 miles (282 kilometers) of Donald Trump’s wall along the Mexican border. Pentagon officials would not say which 127 projects will be affected.

• Washington Post: Michigan has become the first state in the nation to ban flavored e-cigarettes, a step Gov. Gretchen Whitmer (D) said was needed to protect young people from the potentially harmful effects of vaping. She complained that e-cigarette companies are using sweet flavors, such as bubble gum and “fruit loops,” to hook young people on nicotine, with potentially long-term harmful consequences.

• Reuters: U.S. grocery giant Kroger has announced they are joining Walmart in “respectfully asking that customers no longer openly carry firearms into our stores, other than authorized law enforcement officers.”

• Twitter: Twitter had a field day after homocon White House spokesman Judd Deere tweeted Vice President Pence couldn’t be “anti-gay” because he had lunch with the openly gay leader of Ireland.

As we all know, the former governor of Indiana signed a religious freedom law that was criticized as a pathway to legal anti-LGBTQ discrimination. He also endorsed a constitutional amendment against same-sex marriage.

Deere’s tweet was ridiculed by thousands, including Chasten Buttigieg, husband of Democratic White House hopeful Pete Buttigieg, who criticized the suggestion that dining with Varadkar meant Pence was not anti-LGBT.

I’ve sat at tables with people who would gladly deny me the right to marry, who openly support conversion therapy, and who adamantly believe being gay is a choice. Doesn’t mean they’re any less homophobic because we shared a meal. https://t.co/cECWvnFUUV

They think that having a “black friend” means they’re not racist or a “gay friend” is not a bigot. Tolerating us in public isn’t support… They’d happily reinstate Jim Crowe if they could and think we should go “back in the closet”.

Here for the ratio! And to make sure you’re aware that this is a trash tweet defending a person responsible for gay men dying from AIDS an causing an HIV outbreak in Indiana because of his hate. Shame on you. And yeah, I know you’re shameless.

And Pence was by protocol required to sit with a gay person. It wasn’t a choice, graciousness or approval.

I’m a big fan of renewable/clean energy sources. Love this. 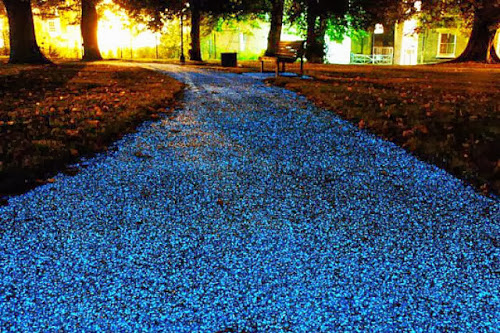 Ok, I think this is pretty cool.

Keeping parks well lit at night can be a costly means to ensure pedestrian and cyclist safety. But a British-based company has come up with a way to turn park paths into glow-in-the-dark thoroughfares that double as energy-efficient works of art.

Created by Pro-Teq, Starpath is a sprayable coating of light-absorbing particles that harvests ultra-violet rays from the sun during the day and dramatically lights up like a starry sky at night. The veneer is non-reflective, anti-slip and waterproof, and can be applied to cement, wood, tarmac or other solid surfaces.

Seeing that local city councils were increasingly shutting off park lights at night to save money, Pro-Teq developed Starpath to maintain public safety without the financial and environmental costs of overhead lighting. It’s a common problem; in the U.S. for instance, cities generally count streetlights as their first or second biggest energy drains.

“Hi I’m Stephanie Cutter I’m the Deputy Campaign Manager here at Obama for America and I wanted to arm you with the facts about the latest attach from Big Oil. You may have heard of the Koch brothers they’re secretive oil billionaires bankrolling Republican campaigns and now they’re backing Mitt Romney. Pretty simple reason for this, President Obama would take away billions of dollars in unnecessary oil tax breaks –Mitt Romney would protect them.

So now they’re spending six million dollars on an ad that is so blatantly false the Washington Post said that they have no shame.

Let’s get the facts out because it’s important that you guys know the truth. President Obama has helped create hundreds of thousands of clean energy jobs. Projects in all 50 states. And the way these oil billionaires and their front group completely ignore the truth is breathtaking.

Let’s take some crazy examples from their attack ad. They claim the administration gave money to build electric cars in Finland. No, the Department of Energy’s funding was specifically for U.S. jobs at U.S. facilities. Sure enough the company is employing 700 workers in California and their planning to build a plant in Delaware.

They said we gave money to a company building solar plants in Mexico. Nope. And again, our money is going to a solar plant here in America with American workers.

These guys are going to say whatever it takes to tear down the President. They will literally say anything. They oppose expanding clean energy. They oppose higher fuel efficiency standards for cars and trucks.

So we’re going to call their BS when we see it. And we need your help to call them on it too and to set the record straight.

So share this, Tweet it, Facebook it. I keep hearing about Tumblr and whatever that is please use that too. And thank you, for all of your help.”

The truth is gas prices have been going up, though they remain below the high reached in mid-2008 and they were kept unnaturally low in late 2008 and 2009 due to the Bush Recession.

But Republican claims about energy independence, the purported need to “drill, baby, drill,” and the alleged refusal of the Obama Administration to allow energy development are simply false.

The fact is US oil production is at an eight year high. The U.S. exported more gasoline, diesel and other fuels than it imported in 2011 for the first time since 1949, and U.S. dependence on foreign oil has declined every year since President Obama took office.

The reality of the situation is that oil and gas prices are set by a global market that is largely beyond the reach of any U.S. President.

The biggest cause of the increase in gas prices is skyrocketing demand for gas and oil in China, India, and other rapidly developing nations which are pushing up prices globally.

Third, concerns about a possible military conflict with Iran (which many conservatives are actively cheerleading) has created an opening for financial speculators to drive oil prices up even more.

Contrary to the Republicans’ caterwauling, there is little that President Obama, or any other political leader, can do to force gas prices to decline.

That being said, here’s what President Obama has done:

• significantly increased vehicle efficiency in order to reduce the amount of gas Americans need to purchase. In April 2010, the Administration finalized a regulation increasing Corporate Average Fuel Economy (“CAFE”) standards for cars to 35.5 miles per gallon (“mpg”) by 2016.

• been actively investing in developing alternative fuels, such as algae-based biofuels that could replace up to 17% of our nation’s oil imports.

• sought to end the more than $4 billion of taxpayer subsidies that the oil industry receives every year. When the oil companies are making record profits they don’t need the American tax payers money. The President wants to use those subsidies to help finance the transition to cleaner fuels.

The fact of the matter is the GOP “drill, baby, drill” solution won’t bring gas prices down any time soon. And it’s a short sighted solution to begin with. Fossil fuels will eventually be used up. At SOME TIME in the future we have to commit to finding newer, cleaner, more renewable sources of energy.

The National Clean Energy Summit will once again bring together veteran business executives, energy policy innovators, entrepreneurs, investors, and senior public officials from both parties, along with citizens and students to discuss the future of our nation’s energy in an effort to help speed adoption of better energy policy and make our nation more competitive in the global clean energy economy.

“Nevada is proud to host the fourth annual National Clean Energy Summit, an important opportunity for national and state leaders to see firsthand how Nevada is a leader in building a 21st century clean energy future that can be emulated across the country,” said Reid. “By capitalizing on our state’s vast renewable resources like wind, solar, and geothermal energy, we are creating good paying jobs, reducing our dependence on oil, lowering energy costs for consumers, and diversifying our economy to promote growth.“