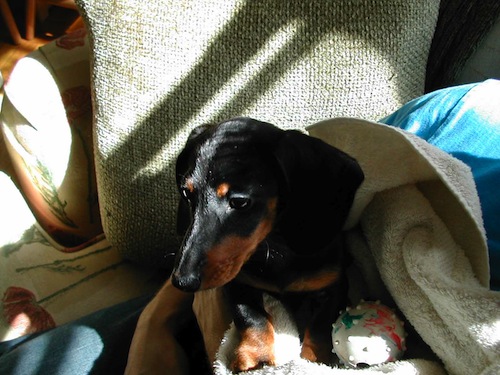 Bruno, in many ways, is a lot of who I want to be: confident, smart and good-looking.

I took the footage from the below video in the first few days he came into my life. I made the video shortly thereafter. On top of his confidence and intelligence, he shows me so much love every day, it’s sometimes hard to believe. I think he’s a better living being than I.

In June 2006, he sustained a crippling back injury that left him paralyzed. Michael and I rushed him to a vet who far too quickly suggested we do the unthinkable – I can’t even write the words. I snatched him from the vet and ran him to the only animal surgical center in all of Nevada.

Bruno was in surgery within two hours of his accident. Shortly after his surgery, he couldn’t feel his back paws. It was possible he might never walk again. Michael and I steeled ourselves to the reality that we would all face a future of Bruno with “wheels” for his back legs. But fortunately, the next morning feeling slowly came back to his back legs.

Over the next many weeks, I lived 24 hours a day with Bruno in our bedroom. He had to be kept quiet to heal, and he’d only be quiet if I sat with him. So – I barely left the bedroom. And when I did, it was for only minutes.

Slowly, we introduced him to physical therapy in our bathtub to get him using his legs again. It was slow going. Slow. And a few months later he needed a second back surgery. But it was all worth it. Many times over.

Today, Bruno has about 70% use of his legs again. He walks ok; tile floors are not his friend. And he kind of gallops more than runs.

But I love him more than I can express. In many ways, I feel he’s my best friend.

He’s handsome, confident, and he loves me.

And he’s the daddy to our three fourteen year old “puppies,” Tyler, Bandit and Bear.

Every morning begins with Bruno in my lap as I check email, begin work on this blog, and start to face the day. Every night ends with me reminding him he’s a super dog.

Below are some of my favorite photos of Bruno: as a puppy, with Michael, and a snapshot of every morning with Bruno at my desk.

That face. I just can’t… #BrunoTheWonderDog
A photo posted by Randy Slovacek (@randyslovacek) on Aug 8, 2015 at 7:27pm PDT 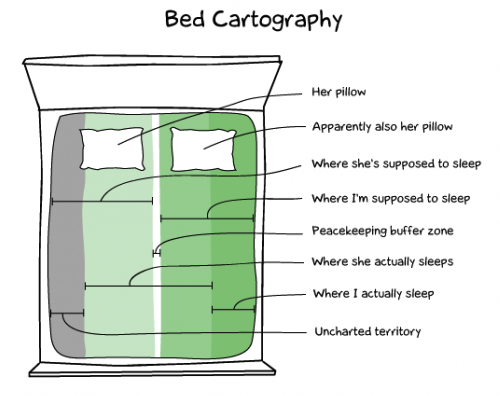 JoeMyGod posted this today.  How many of us can relate?

Actually, Michael is very good about his side of the bed.  Bruno the wonder dog, however, has no sense of boundaries.  Where he is, is his.  Good thing he’s a wonder dog…