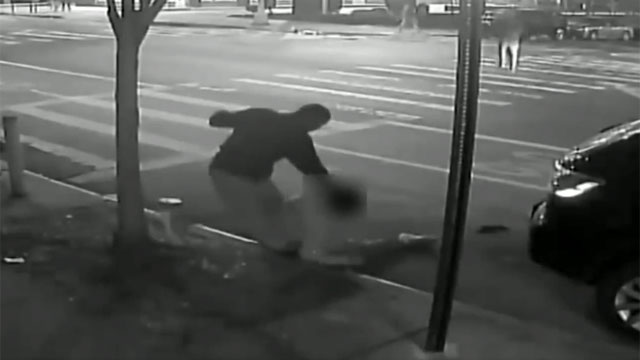 A Bronx teen has been charged with murder, gang assault and robbery for the brutal beating that killed 60-year-old Juan Fresnada on Christmas Eve.

New York Daily News reports Abu Conteh, 18, was arrested on Tuesday in connection with the mugging that profited a gang of attackers $1 and led to the death of Fresnada.

As previously reported, Fresnada and his longtime boyfriend, Byron Caceres, 26, were assaulted around 1:30 a.m. on Christmas Eve when they were targeted by muggers outside a McDonald’s restaurant.

Fresnada attempted to protect his younger partner in the attack but was overwhelmed as three men took part in the assault which lasted about 15 minutes according to Caceres.

In surveillance video, one of the gang can be seen slamming a metal trash can down on Fresnada’s head before fleeing the scene of the crime leaving the elder man bleeding in the street as cars, passers-by and a city bus passed by without stopping.

Fresnada eventually died from his injuries inflicted by the gang, which included swelling in the brain, after clinging to life for three days on a ventilator at Lincoln Hospital.

Conteh was reportedly picked up at his home not far from the scene of the crime after being identified as one of the assailants. Two accomplices have also been identified and police are currently searching for them.

The 18-year-old’s mother, Isataturay Conteh, told the Daily News her son is innocent.

“He saw people fighting and he knows those people in the video but he never touched that man,” said the mother. “It’s not him who killed this man.”

Even with the arrest of Conteh, Caceres says he’s been worried that the suspects might come looking for him.

“I’m nervous about it,” he told the Daily News. “I’m thinking a lot about it…. A lot of people told me that I should cover my face when I was talking to the news.”

The couple had lived together in a small apartment in the Bronx since 2016.

A 60-year-old gay man was violently beaten to death on Christmas Eve defending his partner from a gang of robbers who left the scene of the crime having stolen a single dollar.

Juan Fresnada and his 29-year-old partner Byron Caceres were leaving a McDonald’s restaurant in the Bronx near 1:30 a.m. when a man approached the couple demanding money.

Friends of the couple told NBC New York, “The guys just told them ‘Give me the money, give me the money.’ He was like, ‘I don’t know what you’re talking about.’”

The couple reportedly tried to avoid the conflict by heading into a nearby deli, but the perpetrator followed them, and things quickly escalated.

“My husband tried to defend me,” Caceres told the New York Daily News. “The guy had his fist ready like he was ready to attack me. My husband said, ‘Don’t you get close to him.’”

Two other men joined the first and began to beat the couple. Defen defending his partner, Fresnada told Caceres to run to safety.

According to Caceres, the assault lasted between 10 and 15 minutes as the robbers beat Fresnada relentlessly before smashing a steel trash can on his head leaving him in the middle of East 165th Street with severe injuries to his legs and head.

When Caceres returned, he doesn’t own a cell phone and couldn’t call the police, his partner was bleeding and breathing heavily. The younger man attempted CPR but a bystander said that might not be a good idea since Fresnada was breathing so heavily.

According to NBC New York, throughout the ordeal, no one stopped to help the couple.

Eventually, an ambulance arrived to take the older man to a nearby hospital where he was treated for a fractured skull which led to swelling in his brain and blood pooling in the back of his skull. The younger man refused treatment and is expected to fully recover.

Fresnada remained hooked up to a ventilator and unresponsive until he died from his extensive injuries on Friday, December 27.

Caceres says he doesn’t believe the attack was a hate crime as he doesn’t remember hearing any homophobic slurs during the assault.

The two men met in 2015 through a program for low-income gay men and have been inseparable since.

The police have released this montage of surveillance footage of the men. Anyone with information should call Crime Stoppers at 1-800-577-TIPS.