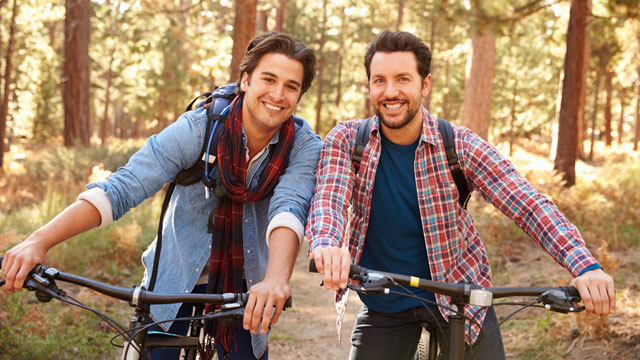 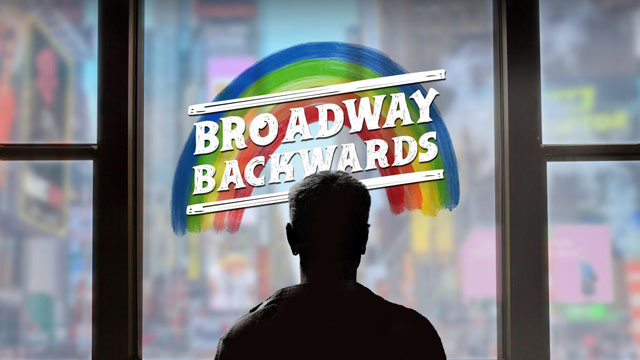 Broadway Backwards 2021 will take a hopeful, musical look toward life post-pandemic in its first virtual edition set to stream with a bevy of Broadway’s best at 8 pm Eastern on Tuesday, March 30.

This year’s virtual edition of the popular theatre event will blend film and musical stage performances as an exploration of how isolation during this pandemic has particularly affected the LGBTQ community.

That and a healthy dose of musical theater and star power are what you can expect. The videos here are just a few highlights from over the years at Broadway Backwards.

The show will feature Jay Armstrong Johnson as a New Yorker who dreams a fantastical, musical theater journey guided by Jenn Colella as a late night TV host.

New performances will be merged with full numbers from past years to come together in a show that feels distinctly of the moment.

Make sure you tune in (for free!) for an ultimate un-Zoom theatrical experience at 8 pm Eastern on Tuesday, March 30 at broadwaycares.org/backwards2021. It will be available on demand through 11:59 pm Saturday, April 3.

Of course, donations to Broadway Cares are always welcome 🙂 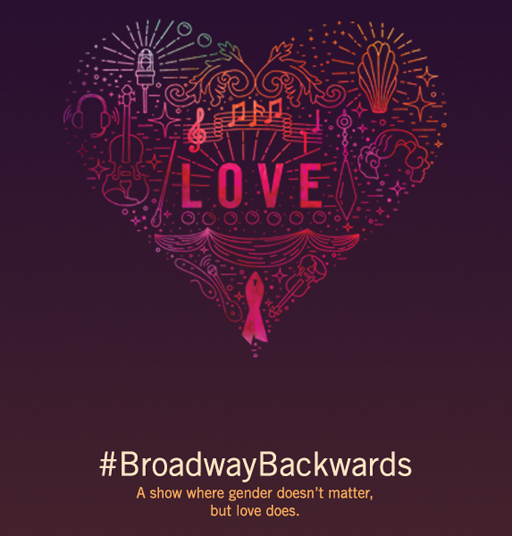 Equality, solidarity and warmth filled the Al Hirschfeld Theatre on March 13, 2017, when the biggest stars on Broadway proved gender doesn’t matter, but love does as they explored and embraced the great songs of musical theatre at the 12th annual Broadway Backwards.

The evening was hosted by Tony Award winner and longtime friend of Broadway Cares, Julie White, who brought her signature sass and wit to the stage. The evening featured 19 comedic, poignant and heart-wrenching numbers, backed by a live, 12-piece onstage orchestra, on the Hirschfeld stage, home to the Tony Award-winning Kinky Boots.

Tony winner Cynthia Erivo brought the house down with a gospel-infused rendition of “Make Them Year You” from Ragtime. Her powerful, show-stopping vocals, backed by the Broadway Backwards ensemble, had the audience on its feet cheering for more in a fitting finale to this year’s show.

What began as a small, grassroots concert performed at The Center in 2006 quickly grew into a highly-anticipated event presented in Broadway’s best theatres. In its 12 editions, Broadway Backwards has raised more than $2.9 million for Broadway Cares and The Center. 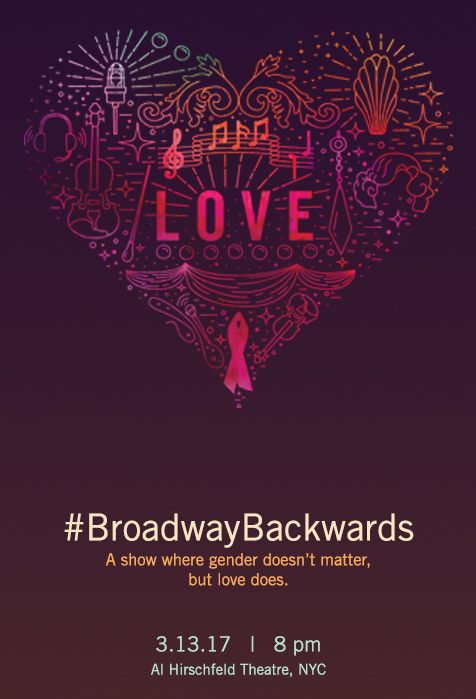 The Broadway community will come together once again for Broadway Backwards, an annual celebration of unity, equality and love through gender-reversed performances of classic showtunes.

The star-studded event features performances of quintessential Broadway tunes with a twist: men sing songs originally intended for women, and vice versa. Artists will perform the great songs of musical theatre while freeing themselves of the bounds of gender norms. It’s a show where gender doesn’t matter, but love does.

Tickets are no longer available online. Additional tickets at various price levels may become available. Sign up for our waiting list to be contacted if more tickets are released.

Creator Robert Bartley will return to direct the show. He will be joined by Mary-Mitchell Campbell as music supervisor and Laura Bergquist as music director. Choreography will be created by Bartley, Christopher Rice and Adam Roberts.

Last year’s inspiring performance raised a record $480,287. It featured a 67-person cast of Broadway and television’s best, backed by a live onstage orchestra.

What began as a small, grassroots concert performed at The Center in 2006 quickly grew into a highly-anticipated event presented in Broadway’s best theatres. In its 11 editions, Broadway Backwards has raised more than $2.8 million for Broadway Cares and The Center. 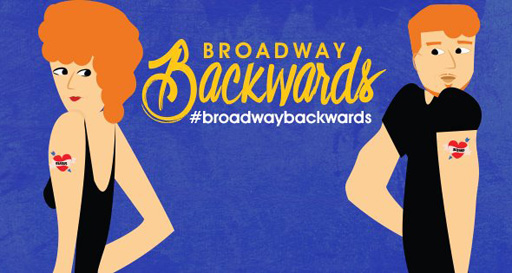 The sold-out audience at Broadway’s Al Hirschfeld Theatre was dazzled Monday, March 21, 2016, by this year’s stirring edition of Broadway Backwards.

The annual celebration, where men sing songs originally written for women and vice versa offering this audience the chance to see LGBT stories told through the great songs of musical theatre, set a new fundraising record.

Broadway Backwards began as a small, grassroots concert performed at The Center in 2006, quickly grew into an highly anticipated event presented in Broadway’s best theaters.

In its 11 editions, Broadway Backwards has raised more than $2.4 million for Broadway Cares and The Center. 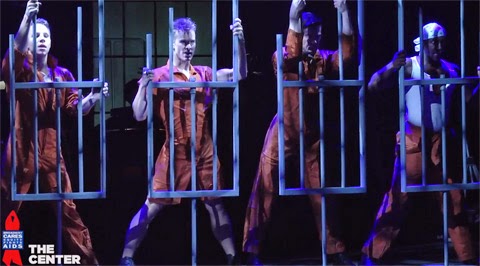 And it’s FAB!  I love this!  Highly inventive and danced fantastically.  Bravo, to the choreographer and actors!

Broadway Backwards is an annual celebration where gays and lesbians see their stories told through the songs of musical theater. 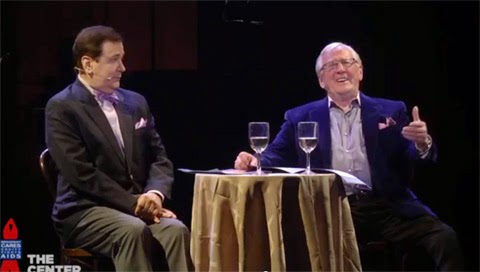 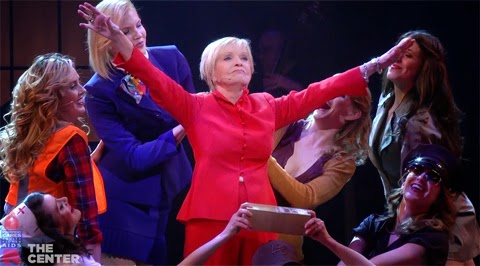 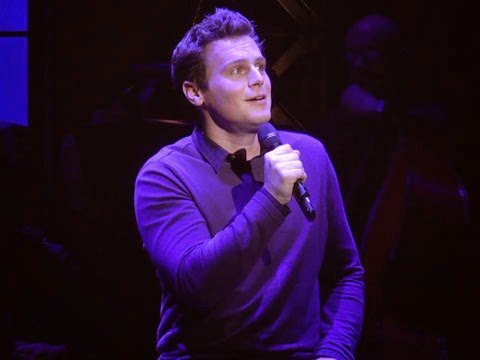 Broadway Backwards (#bwaybackwards) is an annual celebration where gays and lesbians see their stories told through the great songs of musical theatre with performers offering same-sex or reversed gender renditions sung by their favorite Broadway performers. It is produced by Broadway Cares/Equity Fights AIDS and was presented this year in the historic Hirschfeld Theatre.

Check out many of the performances below:

Broadway Backwards features show tune standards performed by the opposite gender for whom they were written. From the producers:

Broadway Backwards, the once-a-year celebration of the LGBT community, brought down the house March 18, 2013, while raising a record-setting $347,060 to benefit Broadway Cares/Equity Fights AIDS and The Lesbian, Gay, Bisexual & Transgender Community Center.

Look for this year and previous year’s events on DVD at this link. EAch of the DVDs feature fab and fun performances through the years from different events. (I participated in the 2010 Gypsy of the Year edition).