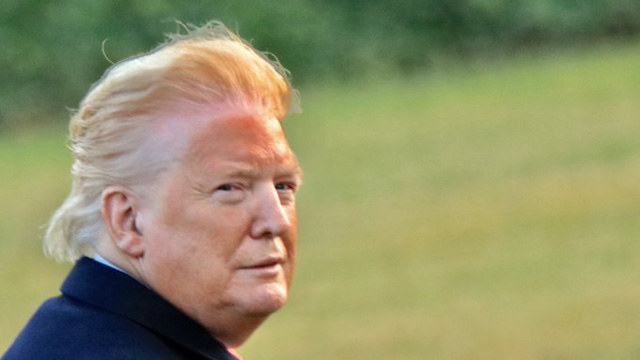 The Twitterverse pretty much lost it when the Twitter account @PhotoWhiteHouse shared the photo above with the caption, “@realDonaldTrump returns to the White House from Charlotte, North Carolina. Photo by William Moon at the South Lawn of the White House on February 7, 2020.”

⁦@realDonaldTrump⁩ returns to the White House from Charlotte, North Carolina. Photo by William Moon at the South Lawn of the White House on February 7, 2020 pic.twitter.com/n1a1Z93LrJ

You know in a cartoon after the character has stood in front of an explosion and they turn to the camera? Yeah. pic.twitter.com/gjgTY57bij

Who on the earth can even take this person seriously? First step: to be taken seriously he needs to fire his makeup straff…but one good thing, his appearance is on line with his performance and behaviour 👍🏻🤡#OrangeFace 😮 pic.twitter.com/tFaf01GQp8

Forgive me for this… but he looks like someone leaving a sex club in Berlin at 11 AM after eating slightly dirty ass all night. (This is an official White House photo & it’s so gross I’m probably gonna take it down soon.)