In the aftermath of a Black man being fatally shot on Sunday during a traffic stop in a Minneapolis suburb, the police chief told reporters the officer meant to fire a Taser – not her handgun.

Brooklyn Center Police Chief Tim Gannon described the shooting death Sunday of 20-year-old Daunte Wright as “an accidental discharge.” It happened as police were trying to arrest Wright on an outstanding warrant.

The shooting sparked violent protests in a metropolitan area already on edge because of the trial of the first of four police officers charged in George Floyd’s death.

After firing a single shot from her handgun, the car speeds away, and the officer is heard saying, “Holy (expletive)! I shot him.”

Warning: Graphic footage, including the shooting

Here's the body camera footage of the killing of Daunte Wright that was just released. pic.twitter.com/A2X8qS8ZFH

He says: “It is my belief that the officer had the intention to employ their taser, but instead shot Mr. Wright with a single bullet.” pic.twitter.com/pEFmc1tOh2

Reporter: "Why is it that police officers in the United States keep killing young Black men and young Black women at a far far far higher rate than they do white people?"

Brooklyn Center, MN, Police Chief Tim Gannon: "I don't have an answer to that question." pic.twitter.com/Xc4SkhfvCA 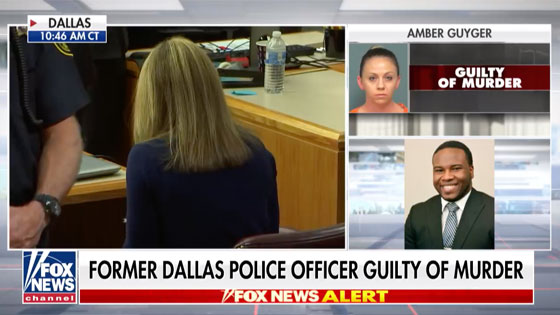 Police officer Amber Guyger was convicted of murder by a Dallas County jury on Tuesday for fatally shooting Botham Jean in his own apartment last year.

According to the Dallas Morning News, the verdict came following five hours of deliberation by the jury.

The court now moves to the punishment phase of Guyger’s trial. In Texas, murder carries a sentence of five to 99 years or life in prison. The charge is not eligible for probation.

Guyger, 31, fatally shot 26-year-old Jean in his apartment last year. She had said she mistook his apartment for her own and thought Jean, who was sitting on the couch eating ice cream, was a burglar.

During testimony, she told the jury she shot Jean because she was ‘scared,’ even though Jean was only armed with a bowl of ice cream.

One of the prosecutors asked her during cross-examination if she could have stepped out of the apartment after realizing someone was there and called for backup. She answered, ‘Yes.’

She is the first Dallas officer convicted of murder since the 1970s.

On Monday, Judge Tammy Kemp ruled the jury could consider the Castle Doctrine during deliberations.

The Castle Doctrine, similar to the Stand Your Ground Law, allows for “using force (even deadly force) in the protection of a home, vehicle, or other property if someone attempts to forcibly enter or remove an individual from the premises.” The judge also allowed the jury to consider manslaughter.

According to some legal experts, the judge may have been appeal-proofing the trial outcome by including Castle Doctrine and “mistake of fact.” An appeals court may have more easily overturned the conviction if jurors weren’t allowed to consider both.